This is a WSJ debut for Sande Milton although this pair has teamed up twice before in the NYT.

The first thing you notice about the grid is the giant squarish U in the center. The grid is rotationally symmetric, except when it comes to the U. Obviously it’s thematic in some way.

How so? Our theme answers all would normally have a U in them, but for our puzzling fun, every U has become an LI. 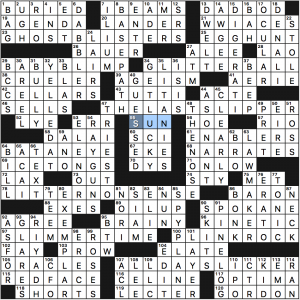 These were a lot of fun; I enjoyed almost all of them. And notice there are no extraneous U’s in the theme answers. That’s not by accident. And the central U makes for a surprisingly effective hint.

The other thing that made this grid a winner is its cleanliness and fun fill. I’m liking GET LUCKY (clued cleanly as [Beat the odds]), BASE PATH (clued cleverly as [It leads to home]), DIGERATI, ENABLERS, BAT AN EYE, ICE TONGS, EGG HUNT, KINETIC, LAWMAKER, EXEMPLAR, RAY GUNS, and SPY PLANE. There are a few things like NORI and ILIUM to keep you on your toes, but for the most part, I really loved the fill here.

Thoroughly entertaining theme and puzzle. Four stars from me. 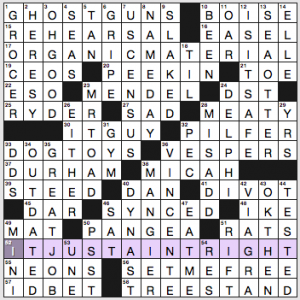 I like this puzzle. There are some boring bits, but lots of interest, too. “IT JUST AIN’T RIGHT” resonates with me and I don’t speak in a Southern patois. ORGANIC MATERIAL is livened up by the clue’s Mars angle. DOG TOYS is cute, and VESPERS is a pretty word (it fills the slot of yesterday’s GLISSANDI in my “ooh, pretty!” category). I like “OH, GOOD!” and “GREAT JOB!” and “OK THEN!” Also nice: SEA OTTER, MR. TOAD of Wild Ride fame, NAME DAY, the U.S. CENSUS.

Did not know: 1a. [Firearms without serial numbers], GHOST GUNS. I know the concept, but not the term.

Unwanted sexism: 30a. [He works with bugs], I.T. GUY. “I.T. guy” is innately sexist, suggesting that I.T. professionals are male. The clue doesn’t say it’s anyone, just a “he,” but the answer phrase itself is problematic and the English language has far too many such terms.

This is the spot where I usually embark upon a bulleted list with some more clues, but I have had a week and I’m going to sign off. Four stars from me.

Here’s where I usually put my opening remarks. I guess this time I’ll say “Don’t get cross with me!” (really reaching for a pun that works with the theme…) 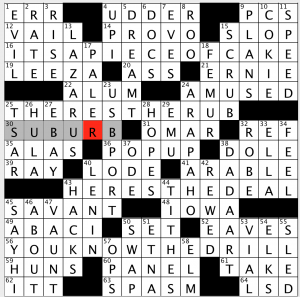 THEME: Apt spoken phrases for people in a certain profession- clued as introductions.

I really enjoyed the playfulness of this puzzle, but I must confess that I’m lost as to how/why these phrases are considered “introductions.” HERE’S THE DEAL seems like the only phrase of the bunch that sounds introductory in a sense. I can’t imagine someone saying IT’S A PIECE OF CAKE to begin a conversation. Wouldn’t the “IT” have to be established first? Perhaps I’m missing something.

Anyway, the phrases all work fine as long as you don’t overthink the “introduction” part. And the fill is a lot of fun-

Little bit of a clue/answer dupe with 27D [Site with seller ratings] and 2D [Assign stars to] RATE.

I’m interested to know if anyone else was somewhat confused by the phrases being clued as introductions. 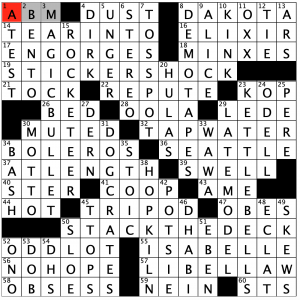 I still have not met this constructor, and sometimes after attending the ACPT, and the subsequent flurry of Facebook friend additions, I feel like I should know each and every constructor personally! I do feel it is an honor and a privilege that I DO know so very many of this unique group of people. Smooth solve for this one, which is great after a brain wrenching tournament last weekend. I think I may have to start solving more downs-only puzzles to make a leap in the standings. And maybe drink more coffee! I’ll stop rambling now; and I will end with the thought that I hope to meet Pawel someday! 4.5 stars. 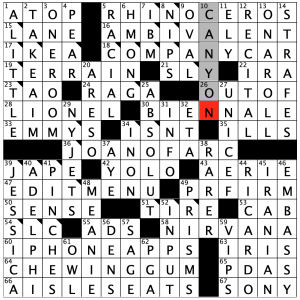 I believe this is the first Newsday puzzle by this “constructor,” but if you look closely you will see that this is a pseudonym of two well known constructors: Erik AGARD and Doug PETERSON, both fellow Fiend members! Excellent anagram work, and the name sounds quite cosmopolitan! This could be the name of that Dos Equis guy you see in memes all the time!

Please try to ignore all of the error marks in the grid image, but I will admit that is hard to do! This puzzle gave me all kinds of fits, but it is likely due to post ACPT-delirium. I am just now recovering from the lack of sleep and jet travel. It is a lame excuse, but that is my story and I am sticking to it! My ineptness aside, this is a quality puzzle by two pros of the biz. Clues are rife with misdirection. 4.8 stars.

Some faves, including several of those aforementioned thorny clues:

Time for a nap!