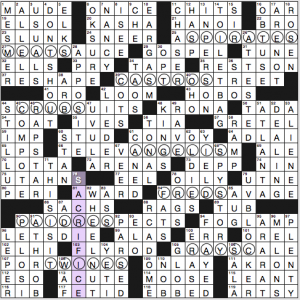 Okay! I’m done with the puzzle but I’m not done with the theme. Let me highlight (mentally) the “one” letter that should be “take”n so that what’s left in the circled squares are the names of baseball teams. 25a ASPIRATES has the PIRATES and an extra S that’s circled. 27a is MEAT SAUCE, METS with an A. 39a CASTRO STREET, ASTROS + C. 44a SCRUB SUITS, CUBS + R. (I’m accustomed to just hearing them called scrubs, no suit.) 66a TELEVANGELISM, ANGELS + I. 84a FRED SAVAGE, REDS + F. 90a PAID RESPECTS, PADRES + I. 105a GRAYSCALE, RAYS + C. And 107a PORT WINES, TWINS + E. Those extra letters spell out SACRIFICE, which is in the grid at 76d with a “see note” clue, but I’m pretty sure that note will just point solvers towards making the connection I already did. Yes, indeed: “Drop one letter from each set of circled letters in the grid to name a major-league baseball team. The letters thus removed, in order from top to bottom, will spell an appropriate answer at 76-Down.” I think I would have liked it better without the note and SACRIFICE in the grid—makes it too easy! Given the title, team names like ASTROS and PADRES jumping out at me, and baseball season having just started this week, I’m not sure the hand-holding was needed.

I kinda forgot about the Sunday crossword till it had been out for four hours. Oops. So now it’s late and I’m tired and perhaps you’ve been wondering why there’s no Sunday post yet.

3.75 stars from me. There wasn’t any humor involved in the theme, and the rest of the puzzle felt pretty dry.

Punny goodness with Yiddish words placed into English phrases. Yiddish is transliterated from the Hebrew alphabet; there are multiple possible spellings of many words. All I ask for is consistency, and this puzzle has that. 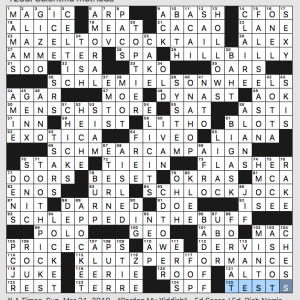 *The author’s attention has been called to a type of conflagration known as a three-alarmer. Pooh.

What I didn’t know before I did this puzzle: that CACAO beans are evergreen.

Spring is here! Of course, for most that conjures up images of flowers… for me it’s weeds. They’re already starting to come up in the garden. Exciting. Weeds stayed out of the WaPo this week, however.

THEME: Flowers are “picked” from the front of common phrases/names and placed at the end instead, creating wackiness.

The perfectly apt title very much gave away the theme for me. What else could “Late Bloomers” mean? While I do like the theme, and certainly enjoyed the puzzle as a whole, a couple of inconsistencies caused some pause. I had the most difficulty with DIS MOVIE ASTER. The altered phrase seems awfully forced, but the problem was that the three themers above it set the “rule” that the flower was the first word of a phrase being moved to the end. Here, ASTER is separated from DISASTER, which I didn’t think was “allowed.” So I left that entry blank for some time. When it happened again with ULTRAVIOLET, I understood that the flower need not be in front nor a stand-alone word (however separating ULTRA and VIOLET seems just fine, whereas separating DIS and ASTER doesn’t).

One other inconsistency with LILY-LIVERED becoming LIVE RED LILY, as it requires the solver to parse the “non-flower” part of the clue.

No nits about any of the fill. Fun, playful, clever. Took my mind off of overthinking any nits I had with the themers.

VIDEO GAME CLUES OF THE WEEK:

3.4 stars from me! Enjoy your Sunday!

A certain city in Arizona would dig this puzzle today.

THEME: The word MESA can be found backwards in three of the theme answers.

One of those puzzle types where the title is what makes it make sense. I usually prefer when a title like that is in the grid itself, but alas, THE TABLES HAVE TURNED is way too long.

All three of the themers landed solidly, DON’T TASE ME BRO being my favorite. GREASE MONKEYS took the longest since for some reason I wasn’t interpreting the word “mechanics” in the clue as people.

Fun stuff in the fill includes CHEST BUMP (that’s a big step up from a “high five”!), the angsty teen’s KEEP OUT! door sign, and YES INDEED!

I’ve never seen OH NOES before, but in the meme era, where the word THE is commonly spelled TEH, anything is possible.

Also… not all couples are CUTE. Ever see middle schoolers experimenting with awkwardly kissing between classes after they become a couple for a week? It’s very, very far from cute.

Did you forget about this?:

THEME: The letter D changes to N in common phrases, and results in wacky ones instead

With a classic theme-type like this, every themer should land… and the good news is they do! The only one I didn’t like as much as the others was PENNANT EARRINGS, probably because there is another N in the word being altered. But BOSS TWEEN, GRUNGE MATCH, and STUN MUFFIN were a lot of fun.

Lots of theme, but fill was fairly standard. Coulda done without DUHS as one of the more awkward plurals I’ve seen. Some clever cluing, such as [Not-so-big shot] for BBS made up for that.