That is by a long way (a full minute, I think) a record time for me, which is entirely an artifact of how easy it was to fill in the theme answers in AcrossLite. The theme is dead easy, although I wonder how really new solvers will feel about it, since it seems to break the rules. I suspect true newbies may find it a bit confounding.

We have three 15-letter theme answers. 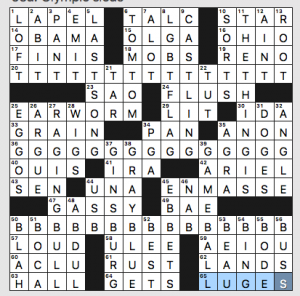 So all I had to do to fill in the theme answers was hold down one computer key, hence the ridiculously fast time. This puzzle reminds me of William Steig’s classic C D B, which was a childhood favorite in my house.

What I didn’t know before I did this puzzle: that I could do a NYT puzzle (even an easy one) in less than two minutes.

ADDED NOTE: I am a dolt. It’s an April Fool’s puzzle, so of course it’s a bit off-kilter. Kudos to Joel and Will for honoring the day and keeping Monday in its lane.

It’s April 1st, so that can only mean one thing… 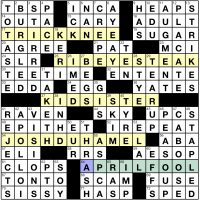 Cute! I’m not one who’s particularly fond of April Fools Day jokes, so I much prefer this streamlined theme of ideas/phrases starting with a synonym for fool: TRICK, RIB, KID, JOSH. I also beyond appreciate the “Love, Simon” reference in the JOSH DUHAMEL clue – I promise I’ll remember this puzzle simply for that moment where I felt included seeing a queer movie referenced so casually. Bravo!

Random thoughts:
– EDDA, the [Ancient Icelandic text] keeps popping up in crosswords for me these days and I don’t think I’d ever heard of it before. It turns out that there are actually two EDDAs, one poetic and one prose, that are well over 700 years old!
– 6D through 8D: NAN? CREPE? AYE AYE! : )
– Pleased to see SISSY Spacek and KERI Russell in the grid though, as always, I hope for more women in the puzzle.

Overall, an enjoyable solve and a bullet dodged for what I fear will be some tricky April Fools Day puzzles in other outlets.

Theme: Things that are DRIVEN (73a, [Like the answers to the starred clues]). 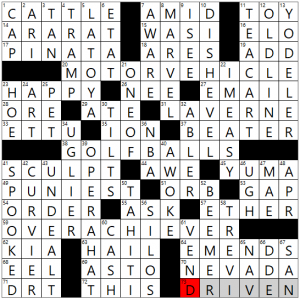 Necessarily, each meaning of the word DRIVEN is slightly different, although I can’t think of an instance in which anyone would talk about GOLF BALLS being DRIVEN in the past tense. Otherwise, it works fine.

Nice to see LAVERNE clued as [Shirley’s TV roommate], played by Penny Marshall who just passed away a few months ago. I also liked BEEMER, TAHITI, “I’M EASY,” and OPERA HAT. While there are a bevy of other 7s in the grid, they’re all of the standard variety (UNDEALT, TEA CART, e.g.).

And that’s all I have. A straight over the plate Monday. 3.3 stars. 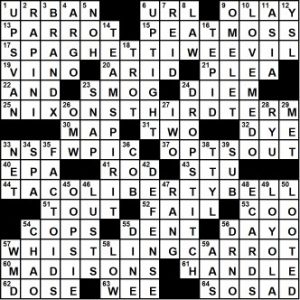 A totes apt theme for the day of its publication, plus some really nice non-themers:

I liked this theme a lot! In the non-theme arena, here is more that I liked:

P.S. – My April Fools joke is to omit putting brackets around the clues, which I forgot to do, actually, but now the review is over and it’d be a real pain to go back and insert them.

I love Liz Gorski’s puzzles. Her “Crossword Nation” series is worth the subscription cost – they’re easy puzzles and always fun and satisfying. This puzzle wasn’t much harder than a CN puzzle, and it was also fun and satisfying! No April Fools tricks here, just a light,up-to-date vibe. 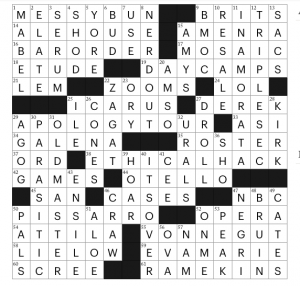 What I didn’t know before I did this puzzle: that there is such a thing as an ETHICAL HACK.

I leave you with the song stylings of 1d, cabaret legend MABEL Mercer.

I half-expected some sort of April Fools’ Day joke in this puzzle, preventing me from finishing it. Relieved that it was another remarkable themeless sans unnecessary trickery so I could get an unashamed write-up together.

The one part of the grid that bothered me was in the NE with LLBS and LBAR. Seems like there’s an endless array of crosswordy BARs out there named after letters, and most are likely to have a 90 degree bend… same goes for the bajillion different degrees earned in college. So that shared L caused me to kinda sorta run the alphabet.

HEBRAIC was new for me, but fairly crossed.

MUSIC CLUE OF THE WEEK:

It’s that time again! Every April 1st, Peter gives us one of Trip Payne’s bizarre constructions – and I say that with love. These puzzles are always fun. If the title’s not enough of a clue, Peter includes this note with the puzzle: IMPORTANT: In this puzzle, most of the answers are made-up words and phrases. For example, the clue “Stupid plane” would lead to the answer DUMBJET, and “Similar to cartoon character Fudd” to ELMERIC. Normal answers are clued in the regular way. There aren’t a whole lot of regular answers. 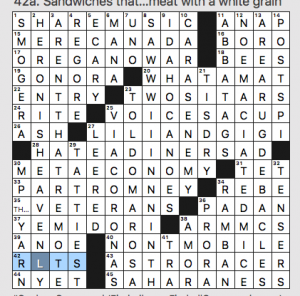 What I didn’t know before I did this puzzle: I didn’t know (or had forgotten) that MERE CANADA is the world’s second largest country.