Big thanks to Jim P. for covering the WSJ Contest while I was in Stamford, CT for the ACPT. I can’t recall if we’re planning an All-Fiend ACPT writeup, but I’ll share (for the maybe five people who read my posts who weren’t already at every ACPT meal with me) how I did: 139th out of 741 competitors! So, solidly in the ‘B’ division, where I’m happy to stay. I would’ve completely “clean” in crossword tournament lingo (i.e. no mistakes) save for a blank square in Puzzle #2 — I had advised fellow Fiend blogger and ACPT rookie Nate to turn his grids upside down to check for blank squares before flagging down a runner, but I had been so thrilled to see [SPOILER ALERT] my name in the grid on that one, and so convinced that it was an omen of good luck, that I neglected to follow my own advice. 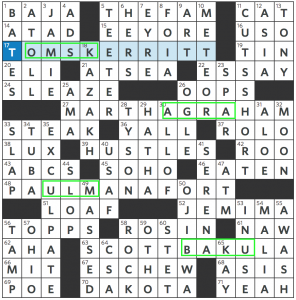 This week Matt challenges us to find a “famous actress whose first and last names total eight letters.” Let’s see what the long acrosses give us:

Four famous(ish) people; what makes them “City Folk”? Each name has the name of a city embedded in it:

Following the metasolving principle of “when you have a list of things, make another list of corresponding things,” let’s list the countries where these cities are located:

Take the first letter of each country, and you get RIGA, the capital of LATVIA. Here’s where I got a little messed up; I looked for a “famous actress whose first and last names total eight letters” that was suggested by the phrase RIGA LATVIA — so my first guess was GAL GADOT (from RIGA LATVIA). But nah — my solving buddies suggested I apply the same mechanism as used in the grid to just RIGA — and AHA!

The lovely and talented TERI GARR is our answer! (As an aside, I always reference this scene whenever anyone asks how I pronounce my name.)

I felt like this was a solid Week 2 on the Gaffney Scale (something we haven’t seen in a while on the second week of the month). There was a similar “embedded city” mechanism in a Fireball Contest last year; this one was a little more straightforward, and still plenty of fun.