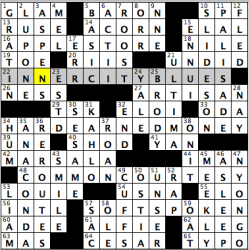 Hello there, everybody! Hope all is well with you as we begin April. Also hope you were not the butt end of an April Fool’s joke yesterday!

Today’s puzzle definitely hits at the core of…cores! Each of the theme entries is a multiple-word answer in which the first word can also come before the word “core.”

Can’t say that I can remember ever seeing OSTIA in a grid before, though, even if you were not up on your ancient Roman history, the entry would not have been too hard to suss out, though you might question yourself for a little bit if it looks right (50D: [Port of ancient Rome]). Got a little hungry fulling in GRATIN (1D: [Potatoes au _____ (creamy side dish]) and washing it down with some sweet MARSALA (42A: [Sicilian dessert wine]). Can’t tell you the number of times I watched YAN Can Cook on public television going back to when I was about five years old (41A: [Chinese-born TV chef]). Just found out that his show goes back to 1982, which is astounding! Am pretty sure I wasn’t aware enough back then to use any of his techniques in my cooking, but now might have to look up archived shows and see what I can incorporate!

“Sports will make you smarter” moment of the day: BARON (5A: [British nobleman]) – Former NBA player BARON Davis was a two-time NBA All-Star (2002, 2004) point guard who played mostly for the Charlotte/New Orleans Hornets, Golden State Warriors and Los Angeles Clippers. Davis, who went to college for two years at UCLA, is probably remembered most for being the star player on the 2007 Golden State Warriors team that, as a No. 8 seed in the NBA Playoffs, became just the second No. 8 seed to defeat a No. 1 seed in the first round of the NBA Playoffs, as the Dubs (Warriors, in Bay Area slang) defeated the top-seeded Dallas Mavericks in six games. 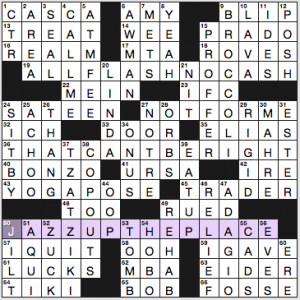 The latest in the occasional series of celebrity collabo puzzles brings together film and TV star Natasha Lyonne, whose work I’ve enjoyed since she made Slums of Beverly Hills as a teenager, and Deb Amlen, who was a crossword constructor before she began writing about the NYT crossword for the NYT. You can read their comments at Wordplay. (There’s also a Times Insider interview with the actress.)

Both are dryly funny human beings, so I was expecting to be amused by the puzzle. The theme riffs on the BOB/FOSSE movie All That Jazz via three phrases that begin with those title words:

The themers share a common casual vibe that makes them cohere, and they’re all lively entries unto themselves.

Highlights in the fill include “NOT FOR ME,” thanks; “Bedtime for BONZO,” which always amuses me; YOGA POSE; TZATZIKI sauce, which was famously misspelled on an NYC food cart as “twatziki,” and I will never forget my puzzler friend Jeff Schwartz relating that; and COPOUTS. I hate BROCCOLI, but I suppose it’s better in the grid than on my plate. ZUCK is fresh fill but I’m mad at Zuckerberg after reading a long Mother Jones article about how Facebook has chosen again and again to screw over real journalism (article might only be in the print magazine).

The clues had so much whimsy! For instance: 33a. [It might have golden locks], DOOR. (We’d settle for brass. My god, who has actual gold hardware?) And 6a. [Poehler vortex of funniness?], AMY, and 35a. [Howe he could invent!], ELIAS—just plain goofy. Some other nice clues:

4.25 stars from me. And this puzzle reminds me that I still need to watch Lyonne’s Netflix show, Russian Doll, just as soon as I finish Shrill on Hulu. 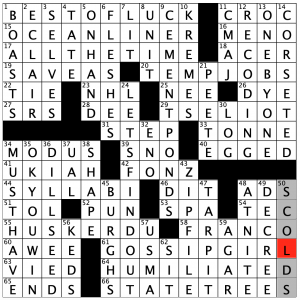 This is a 70-word themeless puzzle, but I got through it in well under 5 minutes! Perhaps that is a testament to being on Matt’s wavelength? (Can we get Matt to do an ACPT puzzle?!) Great puzzle, and I am still in awe of how Matt makes this look easy. Sure, there are a couple of fairly tough entries in here, as well as some obscure pop culture (because it wouldn’t be a Jonesin’ puzzle without it!), but there is very little crosswordese, and that is what you want. What people know and don’t know in a puzzle is highly subjective, but this was nothing but fun. 4.7 stars. 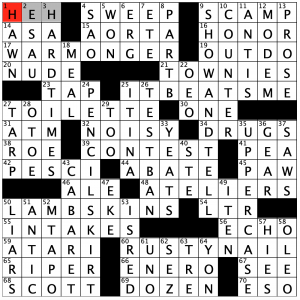 Yes, this puzzle took me over 11 minutes, but I solved it using Downs Only, and I wouldn’t necessarily say this was a speed solve. I think I will be solving most LAT puzzles for the foreseeable future using Downs Only. That may not work for the weekend puzzles, but this is one way to gain solving time, correct? I am ab0ut 15 minutes behind the best B solvers at the ACPT, which is about 2-4 minutes per puzzle. So we are in training mode!

This puzzle was a great one to solve and blog with Downs Only, since the theme is utilized in the Down answers:

We are all familiar with the phrases hard case, showcase, pencil case, and test case. Very well done, and also elegant with using the down format in this case, making the “case” truly “upper.” I like it a lot. Full disclosure: I usually show my actual solving grid image, but it was pretty bad. This one was surprisingly tough to solve Downs Only, even with the theme clues clearly given. I have been doing this more, and it usually doesn’t go as bad as this one did! But a fine puzzle nonetheless; a solid 4.5 stars from me.

Some highlights from my difficult Downs-Only solve (I still haven’t looked at any Across clues!):

More on the Downs Only solving as the year progresses! Have a wonderful Tuesday!

Anyone else humming “Bad, Bad, Leroy Brown” after that solve?

THEME: Fictional characters with Brown as a surname. 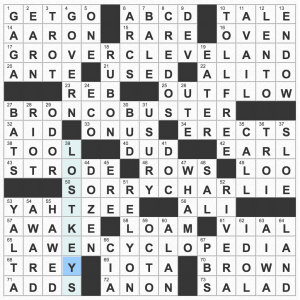 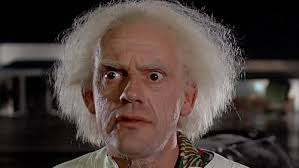 I never realized how many characters have Brown as a last name. The fact that they can be symmetrically placed with one additional word attached is a nice find.

LOST KEYS and TOLL FREE highlighted the overall clean fill (though I suppose most numbers are “toll free” nowadays with modern phone plans, no?).

Tight theme, and it made me fondly recall my obsession with Encyclopedia Brown books as a youngster.

I don’t predict many snickers about the mounds of great theme entries in today’s WSJ puzzle from Peter Gordon: 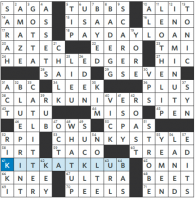 18A: PAYDAY LOAN [Usurious offering from a place with a “Checks Cashed” sign] – Did you know that these legal operations are allowed to charge up to 400% annual interest?!
24A: HEATH LEDGER [Oscar winner as the Joker]
38A: CLARK UNIVERSITY [School in Worcester, Massachusetts] – Likely as well known as gridmate RPI.
53A: CHUNKY STYLE [Like some salsas] – Especially on a delicious TACO.
61A: KIT KAT KLUB [“Cabaret” cabaret] – Do you think they sell CAT LITTER there, too? Is this technically a dupe?

Each themer starts with the name of a candy bar, which ties in nicely to the “How Sweet It Is” title. I’d never heard of a CHUNKY bar or a CLARK bar, so it looks like it’s time for me to raid my local candy shop! Otherwise, this was a solid, clear theme that made for a fun solve. What also helps is how wonderfully smooth the fill is – that certainly helped my solve time.

That said, I was thrown by the inclusion of Michael VICK, convicted dog fighter, in the puzzle. : ( Also, SARAH [Duchess of York] is the only woman who made it into the puzzle vs. at least seven men in the top third of the grid alone. That’s not so sweet.

Lastly, I’ve always wondered what the heck a BAS-relief is, so I finally looked it up! It is a type of sculpture that “has less depth to the faces and figures than they actually have, when measured proportionately (to scale).” Now I know!