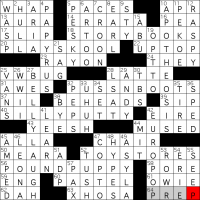 hello and welcome to episode #565 of matt gaffney’s weekly crossword contest, “Early Education”. this week, we have a guest puzzle from jeff chen, and the instructions tell us that This week’s contest answer is how an easy Week 5 meta might make you feel. easy week 5, you say? not to toot my own, but i’m currently riding a two-week streak of being unable to finish “week 2”. could be worse, i suppose—this is four consecutive “week 2” puzzles, none of which were week 2-easy.

well, anyway, on to this puzzle. what are the theme answers? there are six medium-to-long across answers:

(there are also two long downs, APOTHEOSIS and BELLY LAUGH, but i did not think those were necessarily thematic.) what to make of these theme answers? well, the first things that jumped out at me is that there are a lot of double letters, and a lot of similar words: BOOKS/BOOTS, PUSS/PUTTY/PUPPY, STORY/STORES. not having any idea what to do with either of those, and not having any further insights into the meta, i decided to look at the week 2 version. it’s mostly the same, with a few differences. one is that the six theme clues are *ed (and it turns out my instinct was right about which six were theme answers). there are a few differences in the clues, though:

a few other clues are different, but the most notable change is in the grid: in the lower right corner, where {Chop veggies, e.g.} PREP meets {Ooze} SEEP, the week 2 version has {Early education, for short} PRE-K crossing {Ferret out} SEEK. well, that’s interesting! i take it, then, that PRE-K is supposed to be a hint.

oh, i think i understand now. what if we look at only the letters in those theme answers that precede K in the alphabet? there aren’t that many of them, since there are so many O/P/S/T’s:

ok, so the answer is BABIED. that’s very nice, both as an answer to the meta instructions and as an appropriate phrase for a meta mechanism based on “pre-K”. neither the double letters nor the very similar words that i noticed had anything to do directly with the actual theme, although certainly the second and arguably the first were byproducts of the theme constraint. so i’m very glad i decided to take a look at the week 2 version, because i was not going to get this otherwise.

honestly, i’m not sure i would have gotten it if i had only looked at the week 2 version, since the thing that caught my eye was that there was a different letter in the grid between the week 2 and week 5 versions. i guess i still should have noticed the entry in the corner of the puzzle with the same clue as the puzzle title, and i certainly spent some time last week thinking (fruitlessly) about the phrase pre-K as a possible meta mechanism. still, this feels like a week 3 to me without some kind of explicit indicator that PRE-K is the key idea.

lovely puzzle, though. how’d you all like this one?