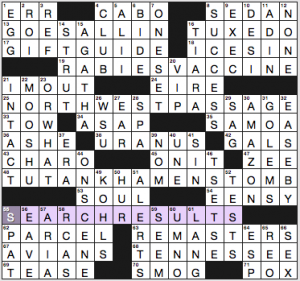 The theme revealer is SEARCH RESULTS, 55a. [Google returns … or the answers to the four starred clues]. The four theme answers are things discovered by the people in the clues:

There is, of course, a wealth of knowledge discovered by women and/or people of color. We learn via Wordplay that Ross Trudeau made this puzzle before people had pointed out to him just how many white men his puzzles featured, and he’s both trying to do better on that front and mentoring newbie constructors from underrepresented groups (women, POC, LGBTQ people). If you are reading this, you like crosswords, and you’re a member of those groups, I encourage you to try your hand at constructing! The Crossword Puzzle Collaboration Directory is a Facebook group where you can find a mentor to coach you through the process of making a publishable crossword, and they’ll patiently answer your questions and encourage you. Go for it!

I’ll ding the puzzle a bit for fill like ZEE, plural RCAS, ALII, WSU, AD IN, TSETSE, and [Vintage car inits.] REO, but the longer fill had some sparkle to it. 3.5 stars. 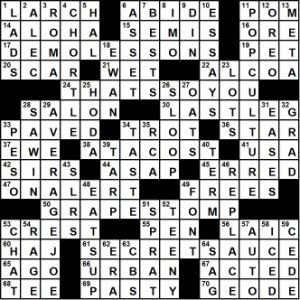 A clever, 5-unit, all-horizontal theme of 11-10-7-10-11?! Nice, on the one hand. OTOH, it doesn’t leave much space for other noteworthy entries, especially Across ones. There’s AT A COST and ON ALERT, common prepositional phrases. Then, in the Down arena, we find two show-off anchors in POP CULTURE and AVERAGE JOE leading an unremarkable cast of totally competent fill. Enjoyable! 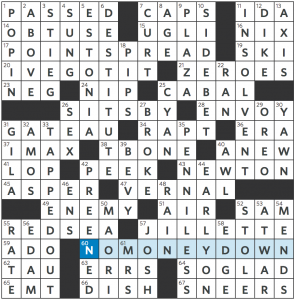 Laura here, in for Jim P., who is on vacation at a Land of some kind down in Anaheim. I think there are mice there? So what’ve we got in this here puzzle? A bunch of down entries are clued in reference to 60-Across, like so:

Nice! I like it when the theme makes use of grid construction, such that synonyms for poor or having no money are the marquee down entries. Not having direct clues for that much down-entry grid space was a little tough going (good luck to anyone solving this one downs-only!) but fairly clues, and I was able to get everything on the crosses.

Fave clue: [47a: Springy?]: VERNAL. April is truly the cruellest month in northern New England; we still have piles of snow in all the north-facing parts of our yard. Spare me your flowery Insta posts! Our dead land won’t breed any lilacs for at least five weeks. Second fave clue: [7a: THIS CLUE HAS NINETEEN]: CAPS. Nineteen what? Spaces? Letters? Ah, ok.

Wow this is a very masculine grid. Not a single clue or entry with anything womany in it; even IDA is astronomical — [11a: Asteroid with a moon] — instead of [Activist ___ B. Wells] or some such. There’s the “girl” in [3d: “The Girl Who Played With Fire” author Larsson]: STIEG‘s clue. And — oh UGH — [61d: Title bestowed in a ceremony]: MRS. I just noticed that since I must’ve gotten it on the crosses. Those of us who chose not to change our names in the marriage ceremony, are we still Mrs.? (My usual reply if someone asks “are you Miss or Mrs.?” is “I’m Dr.”) Maybe we should go back to Mistress, like the Puritans. 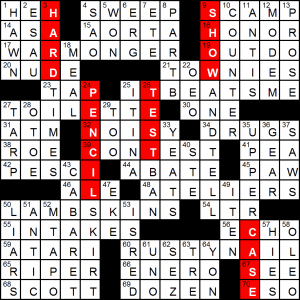 Today features a typical version of a “words that go with” theme. In this case, the word is CASE. It also features a not uncommon wrinkle that the answers are vertical, hinted at by the revealer, UPPERCASE. The four “hidden” words are: HARD(CASE), PENCIL(CASE), TEST(CASE) and SHOW(CASE). Of the theme entries themselves, most are fairly prosaic, with PENCILSKIRT being my favourite.