The next Fireball puzzle will appear next week. 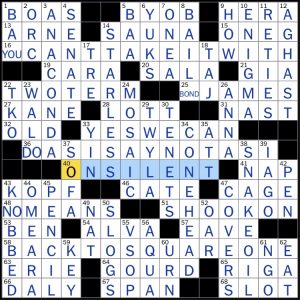 It took me a second to realize going on with this Thursday’s NYT from Lewis Rothlein:

I had cracked that 36A was DO AS I SAY, NOT AS I DO, but couldn’t figure out why it wasn’t fitting in the grid as-is, or why I couldn’t find other entries with multiple DO squares.  Once I realized that YOU CAN’T TAKE IT WITH YOU had the same problem, GO BACK TO SQUARE ONE revealed itself and helped BOND, JAMES BOND and NO MEANS NO slot into place.  This is cleverly executed, with BA(YOU), BAIL (BOND), WAL(DO), and K(NO)BBED taking advantage of the rebus squares on the down fill.

Have a great Thursday, all!  Say no to fascists, especially when your fill doesn’t need them!

Common phrases with an O have that O doubled.

The theme boils down to “adding an O” which isn’t exactly the groundbreaking stuff we hope to see on a Thursday. It would be different if these were knee-slappingly funny or even humorous, but these didn’t do much for me. And the “hot pants” base phrase coupled with 1a OGLES, clued innocently as [Longing looks], were turn-offs for me.

Further, there were some other irksome features such as these:

The difficulty no doubt lies in the fact that we have a 13-letter central revealer which tends to result in either short, choppy corners or challenging-to-fill wide open ones. This grid features the latter variety which are mostly filled satisfactorily, but with some notable exceptions that I mentioned above.

One quick fix I can see right now: A “cheater” square would be helpful at the S in VENOMS. Not only would it make that word singular, but also the crossing NOGS. On the other side of the grid, AFLAME would become FLAME and A PAT would just become PAT. That’s an improvement all-around in my book.

I did like seeing LEBLANC (though I would understand if some people didn’t), LOOSEN UP, NOD OFF, and the Disney-referenced duo of MERMAN [Triton, e.g.] and BALOO [“The Bare Necessities” singer in a Disney film]. I was just at Disneyland earlier today, and my daughter was in a Jungle Book musical last month, so these felt apropos to me.

I didn’t get much joy from this puzzle, but maybe others liked it better. Three stars from me.

I’m being told that this puzzle is by Roland Huget based on what it says in the AcrossLite version… but online, this puzzle is called “Three     and it’s by Five%22. Looks like part of the title got caught up in the byline. Weird.

THEME: Three-word-phrases that make use of only one vowel. 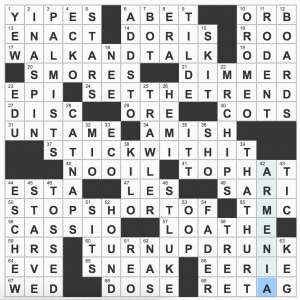 The vowels are used in A-E-I-O-U order. I’m guessing that’s the “Five” part of the title?

Solid consistency with each themer being three words and utilizing only one vowel in each of the words- probably not a heckuva lot of phrases you can do that with. WALK AND TALK, STICK WITH IT, and SET THE TREND are solidly in-language. STOP SHORT OF feels weird with the preposition tacked on (STOP SHORT is more familiar). TURN UP DRUNK is certainly a way people can arrive at a party, but it doesn’t feel like a stand alone phrase to me.

Also a rough start for me when I entered EGADS for 1-Across and accepted it as the without-a-doubt correct answer. So that corner turned into a temporary mess. 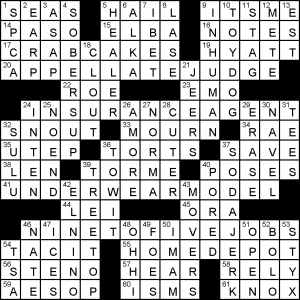 Many apologies, it seems yesterday everything got totally mixed up… Today is another day though.

A very creative, unusual theme: the three NINETOFIVEJOBS listed are all 9/5: APPELLATEJUDGE, INSURANCEAGENT and UNDERWEARMODEL, the third being something of a plot twist.

Four 14’s is not a common arrangement, and does present significant design challenges. Oddly, the constructor has gone for only 72 words, which is more typical of a themeless. That does make space for longer entries like SODAJERK (a non-9-to-5 job), HOMEDEPOT and CRABCAKES. Speaking of which, those of us who belong to LearnedLeague must have shaken our fists at the clue for 17A – [Dungeness delicacies], a recent question asked for Dungeness in relation to its crabs. This South African had no hope.

[Nickname of golfer Sergio García, who turned pro at age 19], ELNINO. This is quite a golf deep cut, but the end of the clue nudges you in the right direction, implying the nickname relates to youth. 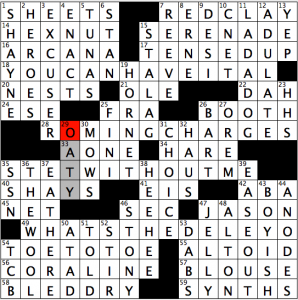 Liked the idea, but some of the puns went over my head. Liked seeing RED CLAY, HEX NUT, SYNTHS, CORALINE, and BLED DRY in the fill. Enjoyed seeing the modern clue for STAN [Be an overzealous fan], as well as the Roz Chast quote about ERNEs: [“I also saw an egret, an emu, and an ___ who was building an aerie.” (Roz Chast on crosswords)].

That’s all from me today. Until next week!