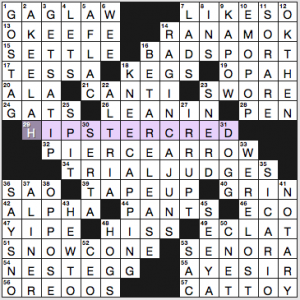 It’s been a long day/week/season and this 66-worder annoyed me. The big open center of the grid is pretty, but the clunkier bits of fill overpowered that advantage. OPAH YIPE ECLAT SNERD SORARE, all so meh. I did like BAD SPORT, HIPSTER CRED, SNOWCONE, GO STAG, RAGIN’ CAJUNS, and SICARIO. But there was a violent vibe with GAG LAW, GATS, the sharply weaponized name of the old PIERCE ARROW car, KNEECAPPING, ALTRIA‘s tobacco, KAPOW, RAN AMOK, and the denials of SAYS NO and OPPOSE. 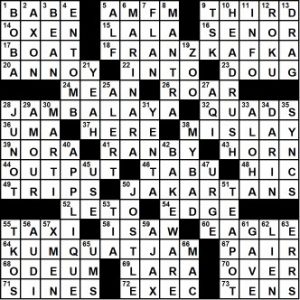 Sorry, Ian, Will, and Dave. This one didn’t do much for me. So, the title is “Holding Hands,” and we have theme answers with lots of A’s, K’s, Q’s and J’s. Five in each. Poker hands.

Maybe, I’m missing something, but it just all seems kind of random. That said, there are two 2-word items and two single-word items, so we’ve got balance. But they are not particularly interesting other than having all those letters that one might characterize as representing playing cards–and, granted, card game analysts do use these notations as shorthand. Elsewhere, … : 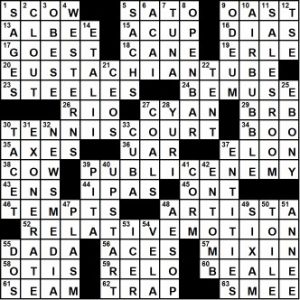 Start with the reveal:

Good fill. Theme I’d never have thought of and have never seen before! Kudos!
3.7 stars. 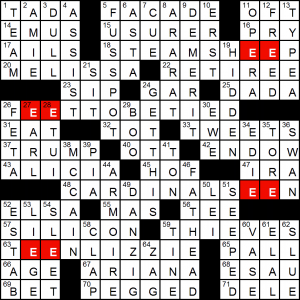 A wrinkle in the wacky Friday LA Times trope today – letter/sound substitution – I becomes EE in four entries. They are: STEAMSH(I/EE)P; F(I/EE)TOBETIED; my favourite, CARDINALS(I/EE)N and T(I/EE)NLIZZIE. Booked my first pelagic trip for three weeks from now. Hoping to see some albatrosses and petrels; a cardinal would be tres unlikely! Side note, the ‘i’ and ‘ɪ’ sounds become very similar in some accents. I am still unsure if John Holt is comparing himself to a wandering ship or a wandering sheep…

Not too many tricky spots today, despite nearing the end of the week: 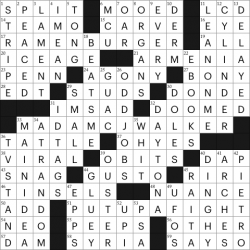 Hello there, everybody! I hope all is well with you as you speed into the weekend!

So what could be better than getting ready to start the weekend with some nice weather in store? How about more themeless crosswords from The New Yorker! That’s exactly what we have, starting today, as the publication, probably realizing how many crossword lovers adore the weekly Monday puzzles that are available online, have added to the puzzle goodness by introducing a Friday themeless crossword to its bag of goodies. Bi-weekly themeless crossword goodness? Let’s do this!

So let’s talk a little about today’s crossword, constructed by Mr. Agard. As per usual, so much fun fill, even if I had never heard of a RAMEN BURGER before and, more than likely, would not want to try it upon reading its clue (17A: [Entrée with a noodle bun]). It was a pleasure working with Erik, Derek Allen from DoaCF, et al., on the Black History Year puzzle pack that currently is available for purchase on the New York Times Crossword app, and, during my time working on it, found out so much more about MADAM C.J. WALKER that reinforces my belief that she’s indeed the first lady of beauty (33A: [Beauty mogul whose former mansion may soon house an institute for female entrepreneurs of color]). The cluing was amazing from Erik, as always, and I particularly liked the clues for NUANCE (48A: [What many hot takes lack]) and DONDE (Spanish for “where”), the latter being welcomed because of my five years of taking Spanish in high school and college (30A: [Partner of quién, qué, cuándo, por qué, and cómo]).

I wasn’t thrown too much when I first put down MCU, even though I had never seen Marvel Cinematic Universe be abbreviated before (6D: [“Iron Man” and “Avengers: Endgame” belong to it, for short]). Once I figured that the “M” had to stand for “Marvel,” that was all I needed to know to be assured of the answer. For those in New York, you may know that MCU is also the name of a bank, Municipal Credit Union, that happens to be the bank that my mom and oldest brother belong to.

Probably my favorite fill in the grid was ODD JOBS, as I can relate to having a number of the them — including a couple current ones I’m doing at the moment — to make ends meet (26D: [Sporadic opportunities for extra cash]). And a shoutout to our Asian/Middle East area friends in ARMENIA (21A: [Neighbor of Turkey]) and SYRIA, and I continue to pray for all in Syria for the needless violence and death to end in hopes of ushering in understanding, healing, peace that is so necessary there (58A: [Aleppo’s nation]).

“Sports will make you smarter” moment of the day: BONY (27A: [Skeletal]) – Though my love in international soccer happens to be the Nigerian national soccer team, I guess I can make some room to give some props to the Ivory Coast. Maybe. Current professional soccer player Wilfried BONY is a member of the Ivorian national team and, in 2015, was named on the African Cup of Nations Team of the Tournament (the top 11 standout players of the tournament) as Ivory Coast won the title. In 2013, Bony led the Dutch top flight soccer league, the Eredivisie, in goals with 31 while playing for Vitesse Arnhem.

Thank you so much for the time, everybody! Have a wonderful weekend!