I didn’t understand the theme until I put in the last letter (the N in 3d LENITY). Grokking it sooner probably would have helped my dismal time but c’est la vie.

WRINKLE IN TIME is our theme (70a, [With “A,” classic science fantasy novel, and a feature of the theme answers]). (See also 27a AVA [DuVernay who directed a 2018 adaptation of 70-Across]). I was thinking this meant that we were looking for the letters TIME, but scrambled. Or else we would be looking for units of time (seconds, minutes, etc.) modified somehow. Neither of those turned out to be the case.

What it actually is is that Mr. Trudeau found phrases that have the four-letter string TIME and then “wrinkled” that string with the use of a block, either making the letters go up or down as needed.

Whew! This had to have been a bear to construct what with the sheer amount of theme material and with some of the letters triple-checked. And it’s very elegant to have the second part of each themer be a legitimate crossword entry in its own right. I’ve never heard the terms MULTI-MEMBER or QUANTIMETER, but maybe I suspect those are just gaps in my knowledge base.

With a theme this big and tricky there are inevitably going to be some compromises to be had. These can be found in the likes of dupes “THAT’S WHAT” and TRUE THAT as well as NO IRON and NOS, uncommon words LENITY, POMMELED, OLEATE, and OTOMI, and the heavy crossing of proper names in the SE (KINER, PETER I, EVARISTE, ERNST, TURNER, SEGAR, and TERI GARR, with SUHARTO crossing KESHA and KERI nearby for good measure). That whole section was rough for me, but I managed to bull my way through.

But there are a lot of great entries, too, like RIPOSTES, DJANGO, BIO LAB, the aforementioned TERI GARR (answer to last week’s contest crossword, btw), “POOR ME” countered by “I’M FINE,” EUROSTAR, OIL TANKS, DANCE MOVE, ANT TRAPS, WAR DEBT (though that was hard to parse), LUMMOX and FANFIC.

With a tricky theme like that and the difficulties inherent in the construction as well as the fun fill, I’m happy to overlook some of those trouble spots in the grid. 3.8 stars. 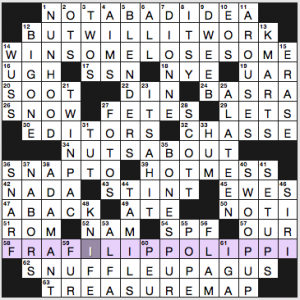 I enjoyed the top three rows of this puzzle, which tell a story. One person proposes something a little off the beaten path. Another replies, “NOT A BAD IDEA. BUT WILL IT WORK?” They try some things, adjust the technique a bit … to no avail. “WIN SOME, LOSE SOME.”

Now, the fourth row hits you with UGH SSN NYE UAR, not so entertaining, and assorted other short and medium fill was blah. SETUPS beside the weird SWOOP UP (to me, [Quickly grab] would be SCOOP UP) duplicates UP too close together.

Other crunchy entries: NUTS ABOUT, HOT MESS, SNUFFLEUPAGUS, the seismic BIG ONE, and BONE SPUR (I would rather have the fake ones than real ones).

Did poetry throw you off on 58a. [Renaissance artist who’s famous for his “Coronation of the Virgin”], FRA FILIPPO LIPPI? There’s a Robert Browning poem called “Fra Lippo Lippi,” and our class read (the much shorter) “My Last Duchess” instead of the long “F.L.L.” so I don’t think I learned that Lippo was short for Filippo. The 59d. [Trim option] clue for FUR stumped me, since I was thinking of car interiors and not fancy parkas. 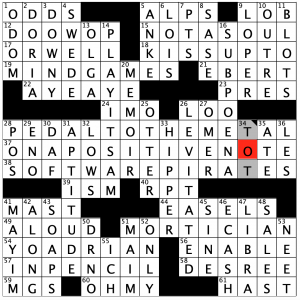 I did NOT solve this Downs Only; not confident enough yet to do a Saturday puzzle like that. Or maybe I am just scared! Or maybe I am most fearful of how long it will take, and being in accounting, this time of year is a little hectic. I may try one soon, though: my understanding is this is one of the best ways to improve solving skills for these tournaments. Maybe next Saturday!

At any rate, a great puzzle this week. A great triple 15 stack in the middle is certainly the highlight here with three great entries, including ON A POSITIVE NOTE and SOFTWARE PIRATES. Lots of great stuff in the grid as well: 18A [Act sycophantically with] KISS UP TO might be one of the better clue/entry combos in the grid. Can you tell I found a lot to like? A solid 4.7 stars from me.

I will stop there. There’s basketball to watch today! 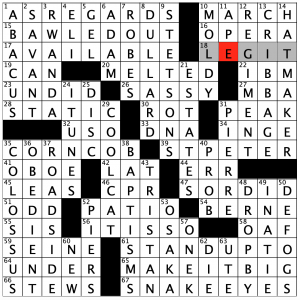 Almost under 10 minutes! I still think I have only solved one or two of these in under 10 minutes. I was rolling on this one, and, as usual, bogged down in a corner, in this case the upper right. I don’t remember what I had incorrect in the grid, but something slowed me down and caused some issues. Stan (“Lester”) still knows how to make a puzzle. A solid 4.6 stars for this one.

Great puzzle, and I could go on, but it’s the weekend! Everyone enjoy their Saturday activities!

I’m probably the wrong person to be reviewing this puzzle. My sports star knowledge is quite limited.

THEME: Athletes whose retired numbers match the clue number for which they are the answer.

WHITEY HERZOG vaguely rings a bell for me (so does DON DRYSDALE, although I initially had the name DAN in DON‘s place). Although this puzzle was by no means in my wheelhouse, names were fairly crossed for the most part. RIO LOBO was tough to see crossing DON. I suppose FRIEDAN might be a cause of a Natick for some as well.

Admirable that Jason was able to ensure the grid maintained those numbers for the theme answers- that can get tricky toying around with fill and black square placement. I’m assuming that’s why the theme answers have an unusual placement with the first two being against the west wall and the last two against the east (rather than staggered).

I SAY A is a partial I could’ve done without, but what else fits the I??Y? pattern that was needed as the entry crosses two themers?