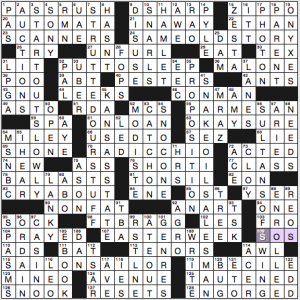 The theme revealer is a little one: 109a. [Critical message that’s a hint to the six longest entries in this puzzle], SOS. Those six themers have S.O.S. initials: SAME OLD STORY, “SAIL ON, SAILOR” (which I’ve never heard of—whadaya know, it didn’t even crack the Top 40 in 1973, there’s no reason you should know it unless you’re a hardcore Beach Boys fan), START OUT SLOWLY, STRUTTED OUR STUFF (with that OUR stuck in there arbitrarily, just to make it fit the theme), SNAKE OIL SALESMAN, and “SULTANS OF SWING.” That’s two Sundays in a row of NYT themes that aren’t funny or particularly clever, just sort of … there.

Here’s a puzzle that’s after my heart! Beer on the house!

THEME: Varieties of beer are literally placed over different types of houses.

My pre-Broadway show “go to” spot.

This is one of those puzzles that, once the solver determines the theme, it is helpful in figuring out the rest of the grid. I like that sort of fill/theme synergy. While there is no need to clue any of the theme entries wackily (they’re mostly straightforward), there’s plenty to like in this puzzle. I mean, c’mon… THE DECIDER was a great throwback alone. The only themer I didn’t like all that much was STOUTHEARTED, primarily because I’m unfamiliar with the term, but also because STOUT isn’t buried within the word like most of the others (see also DISLODGE).

If I were blogging this at night, I’d definitely have a brew in hand. But alas, it’s still coffee o’clock. Enjoy your Sunday! 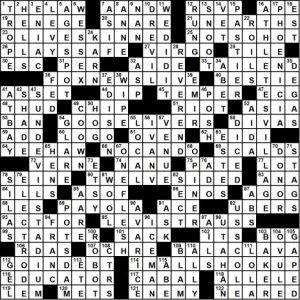 What Ed has done with the King here is–well, let’s watch it happen. First, the reveal:

With this reasonable amount of theme, it’s expected that there will be lots of other good fill. And Ed does not disappoint:

21a [Digs up] UNEARTHS
25a [Meh] NOT SO HOT
26a [Doesn’t take a chance] PLAYS SAFE–Used twice before, this one still bugs me a tad. I think the true ILSA is PLAYS IT SAFE. But …, it’s just a crossword. And, with two priors, it cannot be called green paint (that’s a rule–not!).
33a [Concluding period] TAIL-END
66a [“Impossible for me!”] NO CAN DO
109a [Snowboarder’s headgear] BALACLAVA
112a [Spend too much] GO IN DEBT
116a [Booker T. Washington, for one EDUCATOR
5d [Mark related to sun damage] AGE SPOT
11d [Collective celebratory cry] WE DID IT
17d [Ancient Mediterranean sea power] PHOENICIA
67d [Marriage blend] ONE FLESH–Only one prior usage of this term (watch out for the green paint!).
92d [Destroyer in 2000 news] USS COLE

An unusually difficult daily from Universal today (for me, anyway!). But I like the concept.

THEME: The first three letters of each theme answer are synonyms for a male.

I had no idea that the II part of BOYZ II MEN utilized Roman numerals. It’s already such a funky looking grid entry and being fairly confident with BOYZI?MEN, I still had trouble filling in the second I. Doh! (In retrospect, I absolutely knew the spelling- just forgot during solve.)

My only nit with the theme itself is that it seems to suggest the first three letters should be synonyms for grown men. LAD and SON aren’t synonymous in my book. They both seem to suggest there’s still some growing to be had.

EMPLACE, JOGTROT, EGGAR, RIO DE ORO and GUYANESE were all hard for me to see as well. Also, I can’t imagine calling anyone a BARMAID without expecting said BARMAID to spit in my drink.

Love the clues for RIOT ACT [Babysitter’s reading material?] and CANNOT [Pessimistic word, even when “no” is removed].

We have yummy tasty puns for dessert today. No calories! Groan at as many as you like! 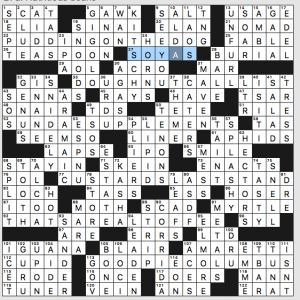 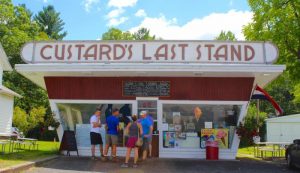 In Long Lake, NY, and only the first of pages of them on Google.

Except for my mental block on 92a, I enjoyed all of these.

What I didn’t know before I did this puzzle: that ESPNU has a show called “College Football Live.”