Submissions for the meta on Rebecca Falcon’s AVCX puzzle “Lost Soul” have closed.  Let’s dive into what was hidden in the grid 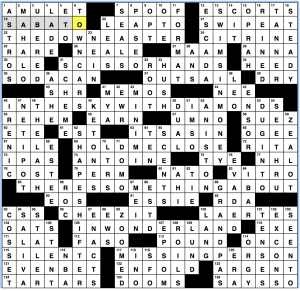 Oh boy, did I overthink the meta on this one.  I blame the larger-than-usual size for giving me an adequate amount of space to go searching the white squares of the grid for something that wasn’t hidden there in the exact way I expected.  More on that in a sec, but let’s walk through the theme of the puzzle before we crack the meta.

Each of this puzzle’s theme answers has a MISSING PERSON – the Billy Joel song is THE DOWNEASTER ALEXA, Winona Ryder was in EDWARD SCISSORHANDS, LUCY IN THE SKY WITH DIAMONDS, IRIS (HOLD ME CLOSE) is the U2 song (it’s off that album that got downloaded to everyone’s iPhone without consent), THERE’S SOMETHING ABOUT MARY is the Farrelly brothers film, and ALICE IN WONDERLAND is the well-known story.

Here is where I completely missed something obvious in pursuit of the meta answer.

Given our expanded grid size, and the mention in the flavortext to “Follow some leads in the puzzle solution to find who got lost”, I proceeded to interpret that as instructions to find those names hidden in the grid, where they’d presumably have extra letters or otherwise point to the final meta answer, another name.  This was completely incorrect.

There are numbers at the end of each theme clue!  They’re unique values from 1-6!  Taking the lead letters of the theme answers (A, E, L, I, M, A) and putting them in numerical order gives you AMELIA, a name!  Wow, I overthought what this grid was doing.

Given the non-grid heavy nature of this theme, the fill was pretty clean to support this – some lovely things like CITRINE, SODA CAN, ANTOIN, CHEEZ-IT, LAERTES, TARTARS, SWIMS IN MONEY, SHAPE SHIFTER, and SALIVA in the grid.  I don’t love SHR for an abbrev. for share, and things like UM NO and I’M SO don’t really do it for me, but overall this was pretty nice.  Nicely done, Rebecca!

What did you think?

This entry was posted in Contests and tagged Rebecca Falcon. Bookmark the permalink.