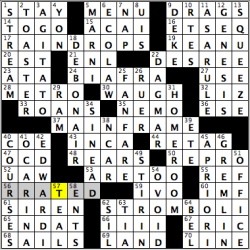 Good day, everybody! Here is hoping that you’re doing well today and that the weather is cooperating in kind, as we just experienced temperatures well above 70 here in Nueva York on Monday! Of course, I misplaced my sunglasses during the winter, so the search for them continues in earnest once this blog is over.

There’s some wonderful framing in this puzzle because, well, actual framing is what’s being done in the grid. Each of the answers on the perimeter of the grid is a word that can also come after the word “main.” The entry smack dab in the middle of the grid, MAINFRAME, acts as the theme’s reveal (37A: [Powerful computer…or a hint to figuring out the “edgy” puzzle theme]).

The grid definitely hit on something that’s close to my heart, given my Nigerian heritage and the occurrences of the BIAFRAN War back in the 1960s, a conflict that gets lost in talks about civil conflicts and other noteworthy/tragic wars throughout history (24A: [Nigerian secessionist state of the 1960s]). If I remember correctly (and I can ask my mother once more for confirmation), both my parents, who grew up in Lagos and away from the Southern part of Nigeria in which Biafra is contained, came to American right before that war escalated to what it became in the late 1960s.

Here is hoping you brushed up on your Latin, with both A PRIORI (45D: [Derived by logic]) and ET SEQ. in the grid (16A: [And the following (Lat.)]). Have to admit that I had not ever heard of MARNI before today, and it was so interesting reading about how she was the actual singing voice in a few movies in which famous actresses who played leading roles had singing parts, including for Deborah Kerr in The King and I and for Natalie Wood in West Side Story (5D: [Movie singer Nixon]). I’m pretty sure that was Rita Moreno’s actual voice in her singing parts to West Side Story, right?!? (Checking now……..and………….yes and no! For “America,” it was Moreno, but Betty Wand’s voice was lent to “A Boy Like That.” Now I want to watch the musical all over again!)

“Sports will make you smarter” moment of the day: NAP (7D: [Snooze]) – Did you know that, from 1903 to 1914, the current professional baseball franchise in Cleveland was called the Cleveland Naps, eponymously named after one of the team’s greatest ever players, NAP Lajoie? Lajoie, whose fill first name was Napoleon, led the American League in batting average five times (1901-1904, 1910), hit for the Triple Crown in 1901 and was elected into the Baseball Hall of Fame in 1937. Lajoie’s managerial career ended after the 1914 season and, when he was sold back to the Philadelphia Athletics after that year, the team had to come up with a new nickname, which is the insensitive/racist/callous mascot that it has in the present day. 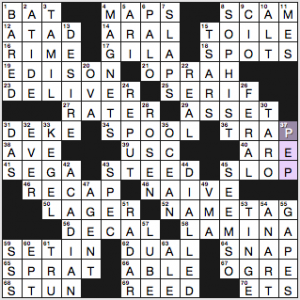 Boy, I don’t know what this theme is doing in a Tuesday puzzle. Does it not feel more like an easy Thursday trick than a Tuesday/Wednesday themed puzzle? Each Across answer has a pair of clues, one cluing the word forward and one cluing the word that appears backwards. For example, 21a. [Entertainer Marx / Entertainer Winfrey] for HARPO back, OPRAH forward. If there is some order here—which ones list the forward word first vs the backwards word instead—it escapes me. All the Down answers are regular, though PEP and RADAR are palindromes and that feels weird in this puzzle.

GATEMAN/NAME TAG and REVILED/DELIVER are familiar palindrome pairs to wordplay aficionados. The shorter ones are less interesting, less showy.

I’m leaning 3.3 stars here, unless there is some elegance to the ordering of the clue pairs that I have missed.

With a title like “Capiche?”, I wonder what we’re getting ourselves into: 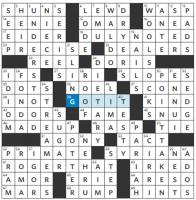 Meh. This unfortunately isn’t my type of puzzle. I prefer something with a bit of wordplay or at least a common beginning/ending, but this just feels like a list of similar things. I also wonder if GOT IT was originally supposed to be a 5th themer (in the form of a statement), since it’s synonymous with the actual themers. It could have very easily been that UNDERSTOOD? was the “revealer” and the other four were themers. I’m sure this puzzle will work for some folks, but it didn’t excite me as much as some recent WSJ offerings have. 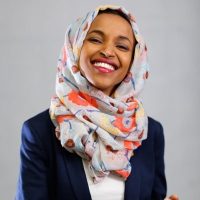 I very much liked seeing Congresswoman Ilhan OMAR in the grid and I enjoyed the clever clue for EIDER [Duck down]. [A foot has five] for NAILS felt gross to me for some reason, and I wasn’t a fan of the imperialist cluing for LIMA [Capital founded by Pizarro]. What about the people who were there before him, even if it wasn’t called LIMA at the time? Other than that, it was a pretty smooth grid! 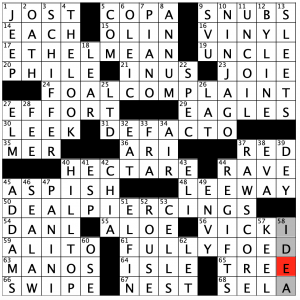 I almost didn’t get this theme, but you have to read the title as “No ‘RM’ Core” for this to make sense. The theme answers all have the letters RM removed from the middle of a six letter word. Puns ensue!

The reason I had trouble understanding the theme, since I thought 17A was a play on Ethel Mertz, not Ethel Merman. Perhaps the clue should have referenced Ethel Merman instead of the neighbor from the I Love Lucy show. Anyway, I spent too long trying to figure out how to change MEAN to MERTZ, but when the theme did hit me, my “a-ha!” moment was a long “Ooooooooooh!”, and that was satisfying. Again, it took awhile, and I was a little delayed because I had to stay up and watch the NCAA men’s final, which went to OT (of course!), so Tuesday will be a looong day with little sleep. And that is not good, since the Jeopardy! test is later tonight!! Anyway, thanks for some more fun wordplay, Matt. 4.3 stars for this one. 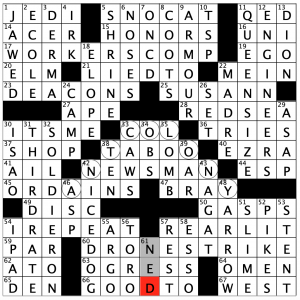 I am continuing my Downs Only crusade, but I will post the image from the regular Across Lite file, since my DO version didn’t have the circles! I must say, this puzzle made almost no sense until I saw that there were supposed to be circles. I hear mixed views on whether circles are good or shouldn’t be allowed in crosswords, but in this sense, I think it totally enhances the puzzle and has a fresh idea. Let me explain the what is going on with the starred clues:

Again, I didn’t see the circled entry in my computer-altered version of the puzzle, and I am not fast enough to pick up on all the “ant” references! I think I am familiar enough with a worker ant, a drone, the queen, and a soldier ant, and these are all preferable to fire ants! I am not a fan of insects in general but the constructor actually sent a pic to use, and I still didn’t put two and two together! 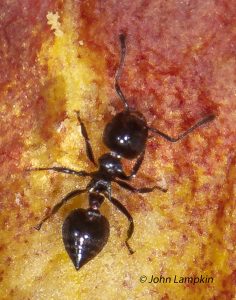 This picture was accompanied by an explanation: “The Crematogaster genus of ants has a cute heart-shaped gaster which gives it one of its common names, the Saint Valentine’s Ant.” Very nice, but I still would stomp it if I saw this in my bedroom! 4.5 stars today!

More fun stuff, from the Downs, of course!

Ah! Spring is in the air! And the birds have come out to play in today’s Universal.

THEME: Birds and their various positions. 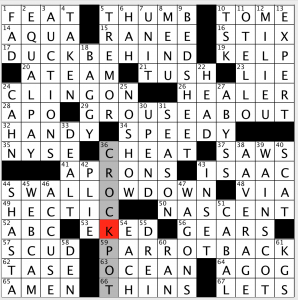 A very consistent set of themers in that none of the entries originally have anything to do with actual birds at all and each ends with location in a sense. Are there any others that would fit this formula?

The theme doesn’t strain the grid either, so there’s plenty of room for great fill which Greg clearly took advantage of with longer downs like EQUAL PAY, BED SHEET, NO SHOW, A AVERAGE, CROCKPOT and WAINSCOT (which is new to me).

Snag for me was writing in a C for KLINGON/KAHN and I had to scan the puzzle several times before I found my error, which is obvious in retrospect.