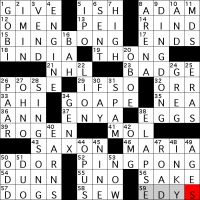 hello and welcome to episode #566 of matt gaffney’s weekly crossword contest, “The Big Picture”. this is week 1 of gentle april. i usually try week 1 puzzles without the instructions, so i’ll be doing that all month. this puzzle was small (only 13×13) and there are four theme answers arranged in pinwheel fashion:

right, so what’s the meta answer? this seems like the kind of theme where the meta answer is a more famous example that would make a good extra theme answer, and the title (which has no obvious relationship to the theme) is another nudge in that direction. i had to run about half the alphabet before landing on KING KONG, which fits the title very well and is conspicuously absent from the theme—although it’s pretty cute that {Actress Wray of old Hollywood} FAY is crossing {Flip out} GO APE in the exact center of the grid. not a coincidence, i’m sure!

with only four 8-letter theme answers plus the easter egg, this puzzle is light on thematic content, which is likely why matt chose to downsize to a 13×13 canvas for it. good choice, i think, because it would have felt weird to have a full-sized 15×15 grid with so little theme material.

clue that caught my eye: {Expression that becomes a U.S. state with one letter changed} OH NO. can you think of any others? i came up with some partials like I OWE, but not a fully formed expression. (well, there’s UH NO, but let’s say it has to be another state.)

that’s all i’ve got this week. fun puzzle!