This week’s AVCX puzzle is another meta, this time from Francis Heaney!  We’ll have the solution once the submission period has closed on Monday.

GRAIN ELEVATOR is our revealer today at 18d [Agrarian structure, and a hint to the circled letters]. The three other long Down entries contain a named crop going in the up direction. But couldn’t things go Down as well since we’re talking about an elevator? No matter, in this case, they all go up. (The WSJ only recently implemented circles, so it’s nice to see them employed, even if I didn’t use them during the solve.)

A nicely-implemented theme with a solid set of interesting entries. My first thought upon getting the first entry was to notice the circled TAO, so the revealer (and/or the title) were necessary to get us looking in the right direction.

And how about the fill today! I’m liking ALAN ALDA getting the full-name treatment as well as “CLUE ME IN,” GO GREEN, OIL TANK, ANTIGONE, Britishy FLAVOUR clued cutely as [Taste of Worcestershire?], MINARET, TAXI RIDE, and TRADED IN. MAZOLA, IN LOVE, and the statue of DAVID are good, too. That is a strong set of fill!

Is it just me or does TEA BALLS sound really icky? Also, KIA RIOS looks wonky in the grid, but I guess it checks out. And I don’t think I’ve ever heard of TAG SALE [One way to declutter] used synonymously with “yard sale” or “garage sale.” This website says it’s more of a northeastern term.

All in all, a superbly executed theme with sparkly fill throughout. Four stars. 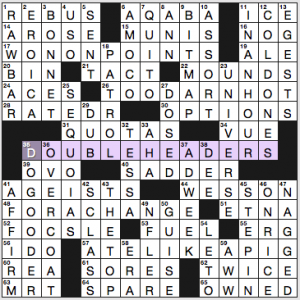 It took me a minute to figure out the theme here. DOUBLE-HEADERS is clued 35a. [Baseball rarities nowadays … or a phonetic hint to the starts of 17-, 26-, 48- and 57-Across], and those four answers are WON ON POINTS (not a familiar phrase to me), the song “TOO DARN HOT” (entirely unknown to me), FOR A CHANGE, and ATE LIKE A PIG. WON, TOO, FOR, EIGHT sounds like 1, 2, 4, 8, a series in which each number is double the one before it. I’d appreciate the theme a lot more if the phrases were zippier. Won by a landslide is a lovely 15, won my heart is 10, won his (or her) heart is 11, won the jackpot is 13. Too big to fail, 12. Would take some work to massage the others into a symmetrical theme set, but I’d have appreciated a more familiar theme set. Plus, boxing, ugh. Never gonna love a theme that starts out punching people in the head.

Another debit: COLD ONES repeats the implied “one” in 17a. Aside from that, COLD ONES is good fill, as are DO-GOODER and SEQUOIAS. Overall, I wasn’t digging the fill that much. MUNIS ERG NOG ETNA EGESTS, meh. 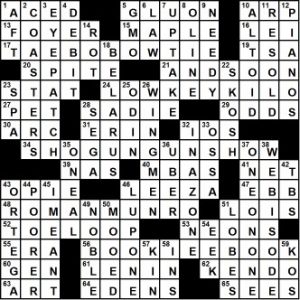 Jeff’s flipping of sides consists of five punny answers, of four syllables each, in which there is a reversal of exact, or virtually exact, sounds:

Very clever. with a supporting cast that includes 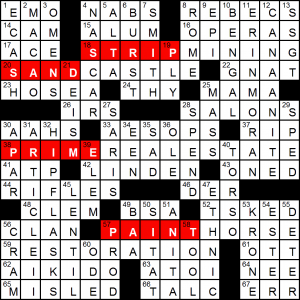 The stages of a DIY RESTORATION are found in consecutive answers: STRIP, SAND, PRIME and PAINT. They make a very natural-sounding set, none of which seemed to have the difficulty of having few natural phrases to choose from in creating a workable set.

The grid has stacked themers on the top and bottom; it’s flashy, but it’s hard to tell whether it aided or harmed the overall grid quality. We do get paired non-theme 9’s crossing two theme entries as well, including full-name ERINMORAN, but at the cost of several forced short answers: AAHS/APAR/ONED and rarely-seen REBECS.

Those bugged me lest than the opening EMO/MACAO/ECASH corner, which I can’t believe cannot be improved upon… Only ECASH is truly horrendous in isolation, but a 5×3 stack should have near limitless possibilities.