I liked the title and first theme entry in this one, so I’m inclined to give it a positive review, even though it’s a rather simple theme for a Thursday. In each theme answer the AI bigram in the base phrase is reversed to become IA. 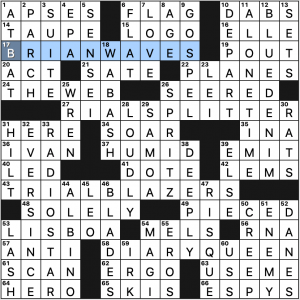 Like I said, the first one was cute, the rest seemed more utilitarian.

I would have found it more interesting if some angle had been found to explain the change, perhaps something related to Artificial Intelligence in Iowa?

In the fill, I loved ALONE TIME [Harried parent’s need] and RADIO STAR [Whom “Video Killed,” according to a Buggles song]. Also good: BLUE DENIM, SENSEI, SPRITZ, RISQUE, and LISBOA.

Cluing must have been on the easier side for a Thursday which might account for my relatively speedy time. Looking over the grid, there seem to be fewer trivia-related or just plain tricky clues. There are a few to note however:

Not the brain-busting workout we sometimes see on a Thursday, but a nice puzzle nonetheless. 3.5 stars.

This is the hardest Fireball themeless I’ve done in a long time. If I’d remembered to turn the timer on, I suspect it would have been over ten minutes. The SW corner gave me fits.

It started smoothly enough in the NE, although I really don’t care for BIOGS. [Nonfiction books about people, for short] are BIOS. 5a made up for it with the very clever [Back track] for B-SIDE. 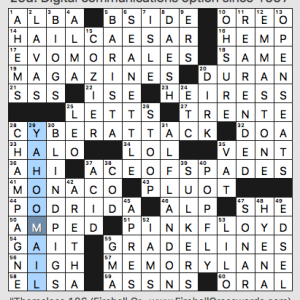 People who don’t like proper names in puzzles will not be happy. I stumbled on EVO MORALES, since I’m not up on my Bolivian politicians, and I didn’t know ALMA was a character in “Brokeback Mountain.” I couldn’t remember Tracy LETTS, which is embarrassing, because I’ve seen and enjoyed “August: Osage County.” I was on firmer ground with boxer Roberto DURAN, Presidential candidate ALF LANDON, actor EMMA STONE and rock group PINK FLOYD.

That SW corner. Oy. I have never heard the term BLIND PIGS, which shows up at 30d as [Illegal saloons, informally]. Peter didn’t include this in the tidbits of information he lists in the answer sheet, either. Google tells me that “Blind Pig” is now a popular name for bars and restaurants. One such establishment, located in Asheville, has this explanation on their website:

I dropped in CHINA PIGS for some reason (makes as much sense as anything) and that made the whole corner impossible. 28a [What a Trojan horse might be used to carry out] should have been SNEAK ATTACK but clearly wasn’t; turns out Peter is thinking of the tech version and the answer is CYBER ATTACK. I have also never heard of  PODRIDA, which is clued as [Rotten, in Spanish]. Once I figured that out, the rest fell into place. Phew.

This is a tough but fair puzzle. I’m proud to have wrestled it to the ground.

What I didn’t know before I did this puzzle: see the laundry list above. I also didn’t know that YAHOO MAIL has been available since 1997, nor that LEO is one of the fixed signs of astrology. 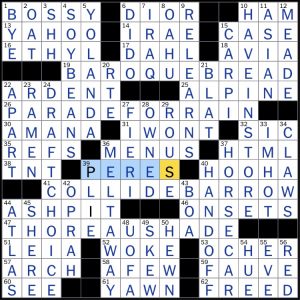 It feels like we already got our “Thursday” off-the-wall puzzle on Tuesday this week, so it seems only fair that this week’s Thursday is more standard, which just a phonetic sort of theme going on:

This was fun, but I had trouble parsing what all the source phrases were here.  BROKE BREAD becomes BAROQUE BREAD, obviously, and THROW SHADE changes to THOREAU SHADE.  It was a bit harder to mentally turn PRAYED FOR RAIN into PARADE FOR RAIN, and I wasn’t able to reverse COLLIDE BARROW into CLYDE BARROW until I started typing this sentence out.

At last, the age old question is answered. And in a crossword puzzle, nonetheless.

THEME: Chicken or the egg? One appears “first” in theme answers, the other appears “last.”

I’ll start off by saying that I had no idea until now that NIT, a word I use semi-regularly, actually refers to the tiny eggs of lice. I’m so grossed out. In a good way (“the more you know” sort of way). I find it ironic that we consider NITpicking to be griping at minor things- if I were actually picking NITs out of my hair, I’d consider the problem quite major. I guess when you see the colloquial version of that word so often in a crossword, and never see it clued as an egg (cuz it’s yucky), you don’t question the etymology all that much.

Anyway. Fun theme. Maybe some minor inconsistencies as to whether or not the bird/egg part of the answer is actually referring to a bird/egg, but I’m not going to pick ni…. errr…. quibble. FERTILIZED OVUM is not really in-language as a stand alone phrase to me, but it Googles well enough in quotes.

Ross seems pretty confident that it’s the chicken that comes first, and not the egg. Anyone disagree? 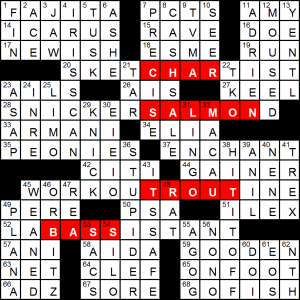 Today’s hidden word theme is a bit more subtle, and has a tad more variety than the usual. I had no idea what was going on until I finished the puzzle, especially as the revealer, GOFISH, is right at the bottom. Afterwards, I landed a CHAR in SKET(CHAR)TIST, a SALMON in SNICKER(SALMON)D, a TROUT in WORKOU(TROUT)INE, and a BASS in LA(BASS)ISTANT. The answers are quite river-fish heavy it must be said. 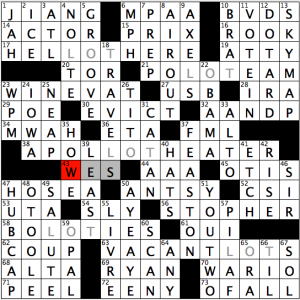 A challenging solve today, for reasons that will soon become obvious. Even though the title gives quite a lot away, I still had a hard time pinning down exactly what the theme was until I got to the revealer at 63a, VACANT LOTS [You can build on them, and a hint to this puzzle’s theme]. Each of the theme answers contains the letters LOT; going across, you read the LOT, but going down, you ignore the LOT (it becomes “vacant”). Like so:

That theme took me forever to write about — as you can see, there’s a ton of theme material in this puzzle. A really fantastic concept, executed to perfection, with the punchline of having two-letter answers clued in the bottom right of the puzzle.

The rest of the fill is pretty solid, especially given how much the theme constrains it. Liked seeing DOTARD, SKY MAP, HUBCAP, O’TOOLE, and the evocative “STOP HER!”. The one place I had trouble was at the seemingly innocuous crossing of HOWE and WES because their clues were unusually tough/obscure: HOWE was clued as [Yes guitarist Steve], and WES was clued as [Contestant Bergman of “The Challenge: War of the Worlds]. (This, by the way, should have been a double-n Bergmann, not that many solvers will have noticed or been affected in any way).

I thought this was a very fun and challenging puzzle. Until next week!