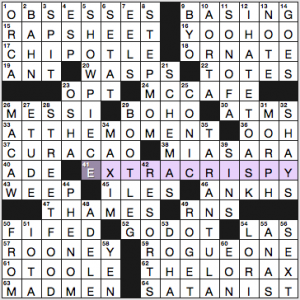 Oh, hey! I enjoyed Howard’s themeless. It’s pretty well packed with fill I like: “YOO HOO!”, CHIPOTLE, McCAFE, the soccer pair of Lionel MESSI and Wayne ROONEY (the one from the Americas plays in Europe, and the European one plays in the US, go figure), ROGUE ONE, GODOT, THE LORAX, SATANIST, STREET FOOD, SHOWPIECE, BOOTLEG, STEPMOM, TARANTULA, and “I HATE TO ASK…”. Wait! I skipped right over the middle, with AT THE MOMENT, CURAÇAO, and EXTRA CRISPY chicken. People of my generation also may have a soft spot for actress MIA SARA, who hasn’t had many prominent roles since Ferris Bueller, but hey.

It’s late (I had fused glass class tonight!) and I’ve got an early morning tomorrow, so three quick things: 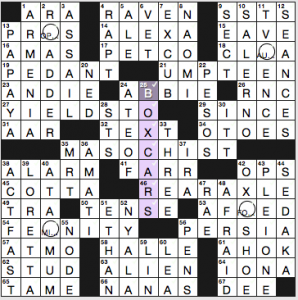 The theme revealer’s in a sort of unusual spot—the middle Down entry. The BOXCARS clue is 25d. [Freight train lineup, and a clue to four squares in this puzzle], and there are four rebus squares containing 4-letter auto makes. I bollixed up the BOXCARS early on by seeing that 13a PR{OPEL}S and 2d R{OPE L}ADDER both had ROPE in them, and I entered these as two entries having one-way {ROPE} rebus squares. The next rebus square I filled in was FORD in the opposite corner (AF{FORD}ED, OX{FORD} SHOE), and I was expecting to find another nearby FORD there as I had not yet filled in the middle with the BOXCARS reveal. Oops. The other two corners have a MINI (FE{MINI}NITY, AT A {MINI}MUM) and an AUDI (CL{AUDI}A, TV {AUDI}ENCE). I’m going to ding the theme for some car name words being too similar to what’s in the rebus entries. Audi takes its name from the Latin for “to hear,” and AUDIENCE relates to that too. See also: MINI and AT A MINIMUM.

Felt like a tough puzzle, no? Maybe not so tough if you cottoned to the OPEL rebus right off the bat, unlike me.

Did not know: 43d. [Greek sea nymph and star who bore seven daughters found in a nearby star cluster], PLEIONE. Her offspring the Pleiades, sure, but PLEIONE, no. (No etymological connection to the crossing entry IONA!)

The fill was kinda rough, with those stacks of 6s and 7s in the corners tightening things up. ARA AAR OTOES SSTS AHOK ATMO, eh.

3.4 stars from me. I like a good rebus puzzle, but I also want smooth fill. 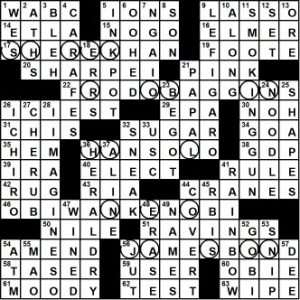 Okay, so we have movie characters spelled within the names of other movie characters. And these need introducing through clues that range from just plain clever to a tad convoluted:

I guess this is pretty clever, though I found myself looking for some relationship between or among …. Seems to be nothing more than the first paragraph describes. I’m sure it took some time to develop.

Other stuff: LE FIGARO, SMOKING GUN, I IMAGINE SO.
3.5 stars. 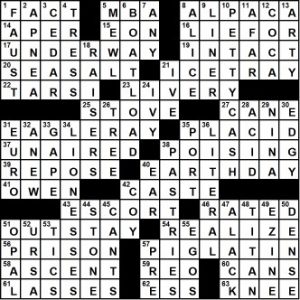 Though not in dictionaries, pork tongue is apparently something that people in FACT cook–on a STOVE or elsewhere–and eat, with or without SEA SALT, according to lots of Google hits.  And, in quotes with initial caps, it turns out to be a pretty good title.

57a [“Language” in which the starred answers make sense phonetically] PIG LATIN–Also known as pork tongue.
17a [*Want to know] UNDERWAY–Aka wonder.
21a [*Moment] ICE TRAY—Trice.
31a [*Fit for a king] EAGLE RAY—Regal. I’d not heard of this bottom-dweller, but it is in the book.
40a [*Scarcity] EARTH DAY—Dearth.
51a [*Rotund] OUTSTAY–Stout.

Hmm, I think of Pig Latin themes as pretty mundane. I guess the draw here is that the five primary theme answers are ILSA’s in their own right, in addition to just making sense phonetically. But there’s little excitement … and no humor, which is a fairly common element in Pig Latin, no?

Other items of note include BOATLOAD and PETTY CASH.

Could have done without POISING, LIONESSES, and RAISERS. 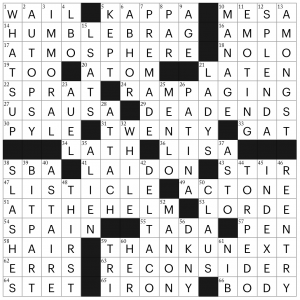 I’m so happy we have two New Yorker puzzles a week, y’all, and an easy themeless, it turns out, is a lovely way to welcome the weekend.  Lots to love in Aimee Lucido’s debut for this venue:

LORDE, featured in this week’s grid and the featured fill by the New Yorker

Another excellent puzzle after last week’s surprise announcement we were getting two New Yorker puzzles a week! 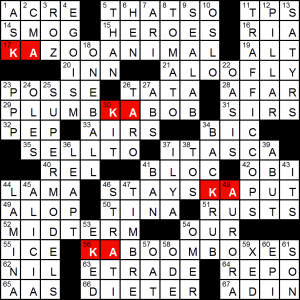 We’re back to letter addition this Friday. Today it’s the digram KA, which has as an advantage the fact that KA words have an exotic, spicy sound to them. was my favourite, despite the gratuitous plural; STAYS(KA)PUT and (KA)ZOOANIMAL are solid enough. PLUMB(KA)BOB though had to be tortured too much to make even a somewhat comprehensible clue.