This week’s Fireball puzzle is a contest. We’ll post a review after the contest deadline.

Pretty sure I’ve seen this type of theme before in which the final word is flipped around to create crossword wackiness. 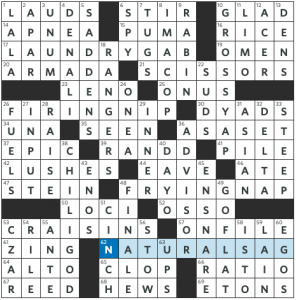 I like the wordplay, but none of these gave me a chuckle. Most of them just sounded awkward. And I would have found it more interesting if the flipped words were longer (five or six letters each, say). Still, some wordplay is (usually) better than no wordplay at all.

Since two of the themers are in the Down direction, there isn’t much space for flashy fill. CRAISINS is the best of the lot followed by SCISSORS and GO FLAT although I’m not sure about the clue for the latter. I would argue that [What helium balloons inevitably do] is a good clue for DEFLATE whereas an open can of soda would eventually GO FLAT.

I could do without LOCI clued as [Spots], OSSO [Bone, in Bologna], and DYADS [Doublets], but it’s Thursday, so we should expect more challenging vocabulary. I’M A COP [Friday’s introduction] is a very dated reference to Dragnet. And then there are the usual suspects: IS TO, DAY O, ONE A, A PAR, UNUM, UNA, ENOS, ETONS. Altogether, and with little ZING in the long fill and theme, I got a lackluster feeling.

In the end I’ll mark this one down around 3.25 stars. I like the fact that there’s wordplay going on, but I’d like to see it with a little more oomph. 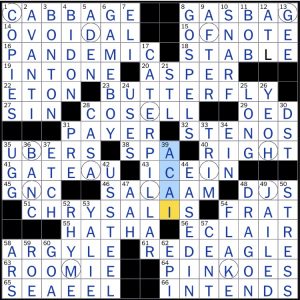 This week’s Thursday NYT theme is a little more tricky to write about – there’s circled letters throughout the grid, but none of them are really theme entries.  There are only 3 of those:

Once you get the grid filled in on the a 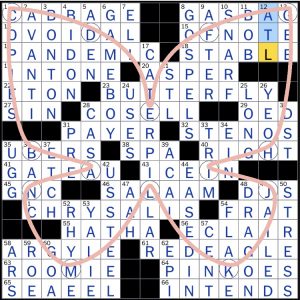 On the whole, it’s a little underwhelming for the Thursday puzzle theme – it’s a nice demo of what the NYT app can do, and a nice welcome to spring finally being here, but as an entire experience it left me a little underwhelmed.

Such a sad puzzle.

THEME: Phrases that begin with a synonym for “tearing up” 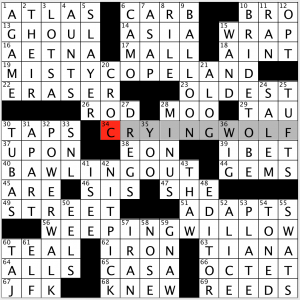 A breezy puzzle with a simple concept and a clean grid. BAWLING OUT is a new term for me, which I appreciate. BRIDE TO BE and POWER WALK make for excellent fill entries.

Happy to see NITPICK after recently learning what an actual NIT was last week .

If I were to NITPICK, I’d say that CRYING, BAWLING, and WEEPING are verbs (as well as “Tearing” in the title) and MISTY is an adjective. But they all work in the sentence “He/She is _______.” So who cares.

Thanks, e.a. Fun as always. 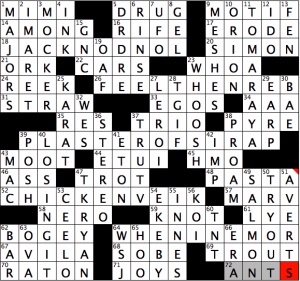 I thought I’d try something a little different this week. As many of you know, I do a fair amount of my solving using only the down clues for an added challenge. I thought I’d try that with the BEQ puzzle this week and see how things went.

Overall, the solve went fairly smoothly! I’ll talk about some of my difficulties below, but first let’s talk about the theme. Obviously, I didn’t see the theme clues while solving, but it was fairly evident that BEQ has taken phrases ending in world capitals and reversed the capitals. Let’s have a look and see how he justified that in the clues, shall we?

Not what I was expecting! The title of the puzzle, “Round Trips,” does all the work here: the places you could take a trip have been turned around.

My general constructing philosophy is very permissive of proper names so long as they’re crossed by familiar words. Of course, when you’re solving downs-only, you don’t have the luxury of looking at those crossing clues. So, entries like TK RYAN [“Tumbleweeds” cartoonist] or TOM ARAYA [Slayer’s lead singer] or even WES clued as [Rapper Sheck] become that much more difficult. Thankfully, I am familiar with the work of Sheck Wes and have at least seen Tom Araya’s name before, but solving this puzzle downs-only would be exponentially more difficult without that knowledge.

As you can see in the grid image, I had an error at 51d. The clue there is [Turns the other way]. It turns out there are two words ending in -VERTS that work for the clue: AVERTS, the correct answer, and EVERTS, which was the first thing I thought of. Both happen to make words going across (PASTA versus PASTE), so I never spotted the error.

The cluing (both across and down) was fairly straightforward in this one, probably because the theme was challenging. The only “?” clue in this one, which I really liked, was 62d, BAR [Old fashioned room?].

If you enjoyed that downs-only analysis of the puzzle, you can watch Joon and I occasionally (~once every two weeks) co-solve some challenging themeless puzzles together on his Twitch channel. 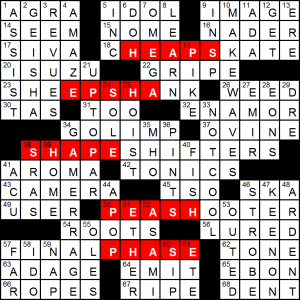 I’ve said it before. This type of theme always feels like a cop out. Oh well, Rene Auberjonois hopefully found the shout-out… SHAPESHIFTERS is the central revealer; anagramming shape like that only yields PHASE and HEAPS to build words from, however. So the letters are instead hidden somewhere in the entries, lessening the impact.

Here, we get a mix of the two, with the last entry being solely in the second part, and the other spanning the two-part phrases. I guess the apt of FINALPHASE as the last entry was too good to pass up, despite the sudden change in the theme’s pattern. Of the other entries, [Knot used to take up slack], SHEEPSHANK may be tough for many of us, barring former scouts and mariners, of course.

The puzzle was pretty low on contrived and awkward fill. A few difficult entries like MHO aren’t irksome if they’re spaced out. We also get GAMERRAGE and NOTCOOL in the longer fill, giving the puzzle a pep injection.