The Chronicle of Higher Education is now on its summer schedule with puzzles every two weeks.

I don’t think I’ve ever done a Friday puzzle in under five minutes. I usually do them first thing Friday morning – maybe that’s it. Or I’m channeling Amy, since this is her usual blogging slot. Or maybe this is a easier-than-usual Friday, and I had a head start because I know what epistaxis means. Whatever the reason, I really liked this puzzle. 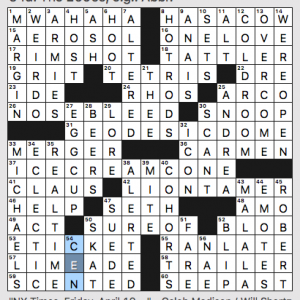 What I didn’t know before I did this puzzle: that Al MICHAELS was inducted into the Television Hall of Fame in 2013. This is the one I remember:

and this is the other Al Michaels clip even non-sports fans have seen. 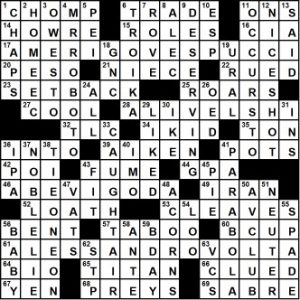 Evan, aka E.K. for present purposes, offers up a group of starred people for an  apt student org.: A.V. CLUB:

With more than a fair amount of theme matter, Evan delivers on non-theme matter as well:

Lots of nice ILSA’s there.

Not an earth-shaking theme, but a nice one. And with nothing troubling in the fill, I’m giving this one 4 stars. 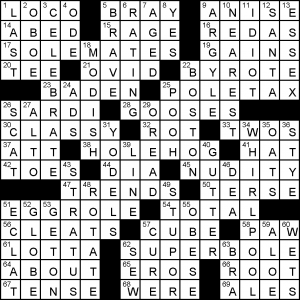 Today’s wacky Friday features homophones. The sound in question is “əʊl” with all the “to” forms being spelt “ole”. The set of five answers are shorter than many, but I found some to create strong images, my favourite being a selfish bunny as a (HOLE)HOG. The rest of the set are (SOLE)MATES, (POLE)TAX, EGG(ROLE) and SUPER(BOLE).

The strangest clue/answer pair was REDAS as a [Trio in the logo…] – RED A’S. I hate partials at the best of times, but “red as” a beet is considerably less bizarre than that. Actually, I don’t get [Energizes], GOOSES either. Goose as a verb to me involves stimulation that I wouldn’t typically describe as “energizing”. On the other hand, I enjoyed the pedantry in the ROOT clue: [Carrot (always) or stick (sometimes)]. A third clue of note for me was [Product of Bali], BRA. New BRA clues are rare; I’m guessing that this is an American brand? [Paging our fiendish bra guru…]