Taking the title literally, the bigram IN is moved from one phrase to another. 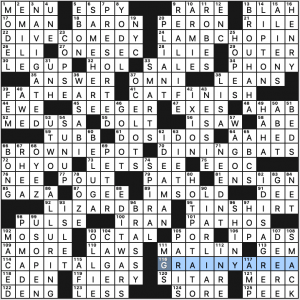 A pretty good set though I could pick nits here and there. For example, I’ve heard “faint of heart” far more than “faint heart.” “Brownie point” is more often seen in the plural. “Lizard-brain” doesn’t feel that in-the-language.

Still, I like the structure of the theme with the IN-less phrases on the left and their partners on the right. Very nicely consistent. And I do like that first pair, each with classical elements as well as crosswordese wackery. On the whole, the consistent structure and wordplay won me over enough to look past the nits.

Plenty of fun fill to enjoy, especially BROUHAHA (though it’s very near to HAHA), OCELOTS, REAL LIFE, WASABI, PATHOS, BELUGA, HOT POTATO, and “LIAR LIAR.” Quite a few fun spoken phrases too: “SAME HERE,” “LET’S SEE,” “ONE SEC,” “I DISAGREE,” and “I’M SOLD” keep things lively. I’ve never heard of EDIT WARS [Wikipedia conflicts] so that was tough to parse out, but I imagine it’s a real thing. (Yup, sure is.)

Oh, I missed DO-SI-DOS [Square dance moves]. I don’t know exactly what the square dance move is, but I do know the peanut-buttery Girl Scout cookie. Oh and whaddyaknow. Do-si-do is a strain of cannabis flower named after said cookie, though it’s described as more minty than peanut-buttery. Happy 420, folks (did I already say that?)!

Not so keen on IDEAMAN. Constructors, just strike that one from your lists. It sounds so dated and sexist that you’d be better off without it.

Beyond that there isn’t much to gripe about beside a smattering of crosswordese (OGEE, ILIE, etc.). 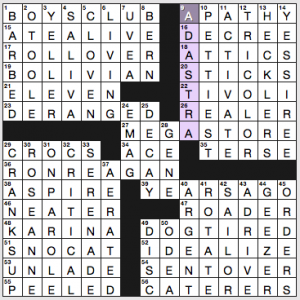 So this is essentially four 8×6 crosswords welded together. I struggled to find a foothold in puzzle 1, but got through puzzles 2, 3, and 4 in a easyish-Saturday amount of time. That first corner took the longest.

Fave fill: The dreaded BOYS’ CLUB, ATE ALIVE, RON REAGAN, DOG-TIRED (this whole week, man!), CRANKS UP, the French TRICOLOR (though the echo of “colored” in the UVEA clue bugged me), and HECKLERS.

Least fave fill: EMAG (nobody really uses this), blah ODEA, A DRIVE, archaic UNLADE, and AD ASTRA clued as [Start of Kansas’ state motto] rather than as the Brad Pitt sci-fi movie that opens in 5 weeks. The fill’s surprisingly low on the “roll-your-own” sort of entries, though, despite the low word count of 60. ROADER clued as a FITB, YELLER not clued as an “Old ___” FITB, maybe REALER—those are really the worst in this category. 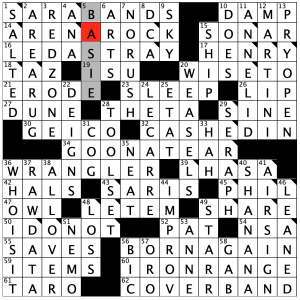 This Downs Only thing is really hard! I got it done in under 15 minutes, but it was a struggle. The solve would have gone much smoother with the Across clues visible (obviously!), but especially these two:

These are two terms I am unfamiliar with. I have been up to the Soo Locks in the Upper Peninsula and watched the ships come in and get raised up to head into Lake Superior, and I think they are hauling iron ore, but the term IRON RANGE is new to me. Other than that, an appropriate challenge this week and another gem from my buddy Kyle, who I haven’t seen in a while now. According to his FB page, he has the NYT on the 26th, so we have that to look forward to. 4.6 stars for this one.

Some highlights (from the Downs, of course!) 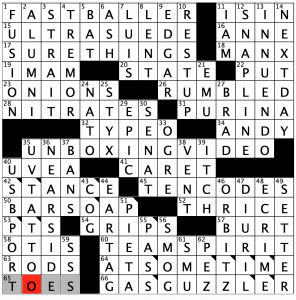 Whoops. I started this puzzle and paused it, but I never stopped the timer. I have no idea what my time was, but it felt like around 20 minutes. This one gave me fits, as you can see by all of the error marks in the grid. I jammed through the top part of this, but the entire bottom third was not on my wavelength at all. I am not sure why, because looking at the puzzle as a whole, it looks like a great puzzle. That’s why they call it a Stumper, I suppose! I have done several of Greg’s puzzles now, but evidently I need to head to his web page and do some more! Hope you liked this newest edition of “joyful agony” from Stan this week: 4.5 stars from me.

Tougher one today from Universal. One of those themes where the solver might see it in retrospect rather than during the solve.

THEME: The latter portion of two state names are combined to make a familiar word. 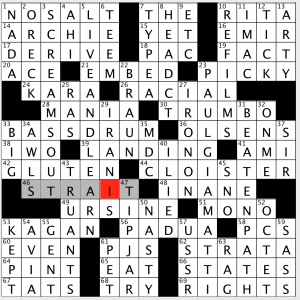 I solved this as a themeless since the theme answers are clued straightforwardly. I found it easier to figure them out with the clue than by trying to determine the connection between the state abbreviations. The AHA moment came about a minute after the solve by seeing the connection in MANIA (I was thrown off with MS + KY as PICKY ends with the actual state abbreviation). Lots of M states in this puzzle too!

The brevity of the theme answers led to some great fill, although if one were looking at the grid alone, it’s likely he/she would think that 3-, 5-, 23-, and 31-D were the actual theme answers. All of those were solid entries (SCREAMS OUT, LIVE AND LEARN, PAUL GIAMATTI, and BEATEN PATH), and they were more lively than the entries around which the puzzle was built. BASS DRUM fits in that category as well.

Had trouble with HEAD CT (appreciate the anagram clue!) and am unfamiliar with TRUMBO, so that area played somewhat harder. Also, the clue for 35D being [CD + CD + CD + CD] gave pause as it kinda sorta looked like a theme clue. 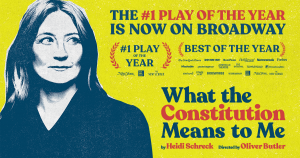 On a side note, there’s a fantastic play on Broadway right now called “What the Constitution Means to Me.” It was recently featured on This American Life and in a season full of outstanding straight plays that opened, NY Times is calling it the best of the bunch. Not sure I agree with that part, but it’s really, really good.

Anyway, I like the concept here and the fun revealer, but I wish solving were more dependent on understanding the theme.