Note from Amy: I won’t have a chance to do the Sunday NYT till after dinner, but in the meantime, I wanted to tell you about a puzzle venture from Eric Berlin. Eric has reworked his Puzzle Your Kids project (“It became clear early on that I only thought I was making puzzles for kids. It turned out I was making puzzles for anyone interested in clever, varied puzzles that use a straightforward and everyday vocabulary”) into Puzzlesnacks, not-too-hard variety puzzles for kids and adults alike. (Variety puzzles, if you don’t know, take all sorts of forms, with a handful seen in the picture above.) The more Puzzlesnacks supporters sign up through Kickstarter, the more Eric can continue making his puzzles available to children for free. A pledge of $3 a month gets you a weekly variety puzzle via email, plus a couple dozen bonus puzzles. Eric does great work and he’s experienced at making puzzles that your friends and family who don’t speak crosswordese can tackle. Click through to the Kickstarter page for more info.

The theme here is nested movie titles that form goofy phrases clued accordingly. The revealer in this 22×21 grid is PICTURE IN PICTURE, or 70a. [Small screen superimposed on a large screen … or a hint to this puzzle’s shaded squares].

It’s a nice touch when the pair of movies are in the same genre, but since it doesn’t work out most of the time, it would’ve been better to avoid the genre pairs. Some of the theme answers work pretty well, but others do not.

Overall I didn’t enjoy the fill. The two-pronged overlap of 133a. [Slobbery kiss], WET ONE with both 47a. [Moist towelette], WET WIPE (yes, there is a brand of wet wipes called Wet Ones) and clunky 98d. [Agenda topper], ITEM ONE? Gonna pass on that. See also: Partial I EVER, DO I DARE, I SAID NO, nobody-has-really-said-this-in-decades I DIG, and HERE I AM?

Least expected entry: 120a. [Broad Australian accent, informally], STRINE. Basically what it sounds like to non-Aussies when Aussies say “Australian” out loud.

It’s time to watch last Sunday’s Game of Thrones, so I’ll sign off now with a rating of 3.25 stars. 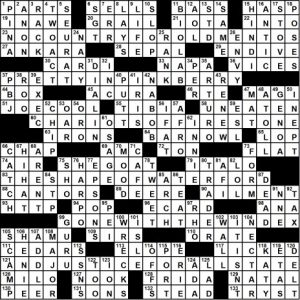 Before-and-after, with a movie and a brand name joined together for each themer. Clever. Enjoyable.

Three different theme types in one puzzle! Sounds too loose and confusing, right? Not at all. This week’s WaPo is super tight and equally as clever.

While none of these theme types is new to crosswords, this puzzle is extra fresh in the way they’re presented. And adding to the tightness of the theme are the entries themselves, all of which are things that can be reduced (JUNK, SCRAP, TRASH), reused (CAN, JAR, TIN), and recycled (SODA BOTTLE, D BATTERIES, and COUPONS). I can’t imagine any other way to get mixed themes like this into coherent puzzle that is this tight and fun.

One mistake that I nev 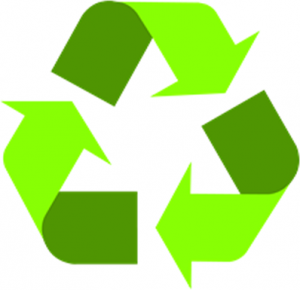 er corrected was my initial answer to 23A  [High-kicking performers (reused food container)]. I wrote in CAN CAN DANgERS. I figured it was a punny take on DANCERS and being the first theme answer I filled in, it seemed perfectly appropriate. When I eventually determined the proper theme, I never corrected it since I was unfamiliar with the crossing down (DECARLO) and it hadn’t crossed my mind at the time that I could possibly be wrong with the theme entry. So it wasn’t on my radar of things I might need to revisit later.

Much appreciated was the clue for 22D [Officials’ trips (Hint: The first syllable rhymes with 54 Down)] JUNKETS. That clue is difficult without the hint, and the rebus square for JUNK is somewhat ambiguous in the theme answer itself.

I had the most difficulty in the TINTINNABULAR section of the puzzle since- although being familiar with the word due to Poe’s The Bells– I was at a loss as to how to spell the latter half. I was inexplicably tripped up by the clue for CASTLE [House of the lord?] and wanted INNATE instead of INBRED for [Natural to a creature]. I suppose there’s no better way to clue INBRED– but it’s one of those words whose connotative meaning is much different in real life.

One thing I want to continue to point out is Evan’s fresh cluing style, even for the oldest of crossword fill. There are far too many examples of this to mention, and it may go largely unappreciated by a casual solver, but it always makes for a good time.

Not that this puzzle’s theme needed any help. That was awesome.

Apologies for the late post! Let’s get to it.

THEME: Phrases that end with types of berries.

I just realized I have no idea what a gooseberry tastes like. They look delicious! Like a stylish grape. Perhaps I’ve had one and didn’t know? I’ll be on the lookout for one in the future.

Standard fare for a puzzle. I confidently entered DUCK DUCK GOOSE with no help at all and the others barely needed much help either. Despite a hangup in the SE (SOFT CAP instead of SOFT TOP and CIAO instead of TATA), the only resistance was solving with the web app. It seems like it’s always behind my typing speed and since the settings are different than my Across Lite settings, I have to backspace quite often to fix errors. Not that it’s anyone’s fault. Just sayin’.

Enjoy the rest of your Easter!

It’s an ordinary word, a word you use every day….actually, it’s a string of ordinary words that, when said out loud, sound like the name of a game show. At least sort of. There’s no trickery in the cluing, but if you solve this with other people in the room they may think you’re a bit daft. I had to say each one out loud to figure it out. 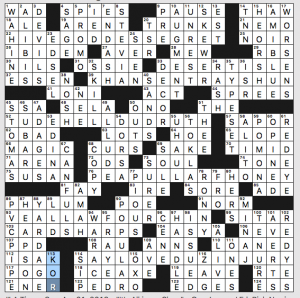 I enjoyed this theme. It wasn’t particularly challenging but it was fun to figure out.

What I didn’t know before I did this puzzle: that AM I BLUE was written and originally recorded in 1929. This is the version I remember: