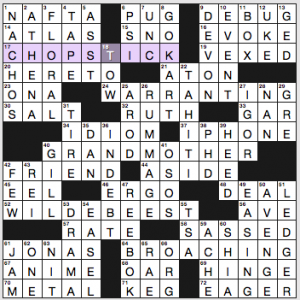 Clever theme! The revealer is 9a. [Remove programming errors … and a hint to this puzzle’s theme], DEBUG, and you have to delete the name of a bug from the themers to get the answers that are clued.

The constructors met at Carleton College, which is my alma mater. Yay, Carls!

The fill is pretty smooth overall, and the theme was light and fun. Four stars from me.

Filling in for Amy again and disproving my theory that Fridays are easier if I do them on Thursday night. Last week was a fluke. This puzzle has a combination of things I didn’t know offhand, somewhat tricky cluing, and answers I don’t expect to see in the NYT puzzle. That last sentence should be heard in an admiring tone – I appreciate a challenge. 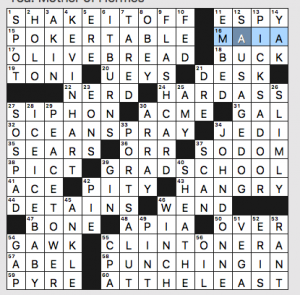 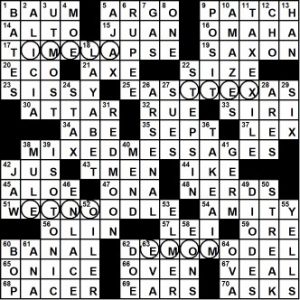 With such a title, I suspect anagramming is afoot. Actually, with the title “Scrambled Communication,” the reveal feels superfluous, but … we’ll start with it anyway:

With so much horizontal theme, it’s no surprise that there are no further attention-grabbing Across entries. In the Down assortment, we find:

Andrew Roth’s The Chronicle of Higher Education crossword, “Are We Theirs Yet”–Judge Vic’s write-up. 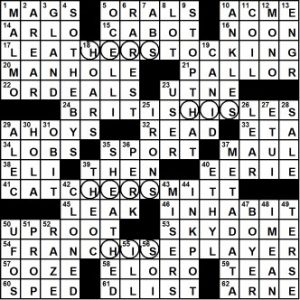 Andrew Roth’s The Chronicle of Higher Education crossword, “Are We Theirs Yet?” – April 26, 2019 – solution

I like this puzzle. It’s cute. It’s quirky. And there’s a lot going on, starting with the subtle, unexpected punniness of Theirs appearing in the title where we’d ordinarily expect There to be.

That said, a second nice aspect of this puzzle is its lack of a reveal. None is necessary. I cannot imagine one that would not detract from both the affect and effect of this gem!

Thirdly …, the clues! Oh my! There are marvelous clues throughout.

But let’s get to the execution of the theme, via four stellar ILSA’s that have nothing in common other than as hereinafter noted.

And so you see HIS/HERS alternating through the theme.

I don’t know whether Brad or Andrew is responsible for the cluing, but it’s fabulous! I am going to include both clues and answers of the other stuff I liked:

The only minor downsides were AREAR, ENGR, ETUI–small price to pay. 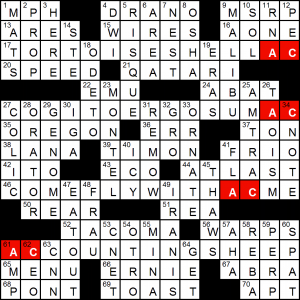 It’s letter addition Friday time! Today’s letters are AC, and there is no punchline. The answers go wide though; all four are 15’s. COMEFLYWITH(AC)ME is my favourite, in part the strong visual element of [Ad offer Wile E. Coyote really regrets accepting?], evoking the coyote on rocket-powered roller-skates or any of a number of similar gags. (AC)COUNTINGSHEEP and TORTOISESHELL(AC) are sensical, but don’t change things too drastically. COGITOERGOSUM(AC) was definitely the most ambitious, but I’m not sure it quite lands; it doesn’t make to much sense, and I’m not sure what the clue, [Cashew family shrub’s observation?], is doing either.

The downside of four spanning answers is there really is no breathing space in the grid. ABAT is as contrived a partial as you can find. REMOW is pretty ugly and not an in-use word. We’ve also had the conversation about IRANIS being not the correct demonym; that’s IRANIANS.