Will Nediger’s Wall Street Journal crossword, “The Long and Short of It” — Jim P’s review

It feels like we’ve been seeing the same names over and over again in the WSJ bylines, so I was happy to see a name I don’t recall seeing in this publication before. But Will’s no stranger to the biz. He runs his own puzzle website, has numerous published puzzles in other venues, and I want to say he’s involved in the running of a puzzle tournament (but I could be wrong about that).

Anyway, he brings us an aptly titled grid today which is the old standard vowel run, but with a twist. The theme entries on the left side end in a word following the form B*TS where the * is a long vowel. The entries on the right have the short-vowel version of that word. 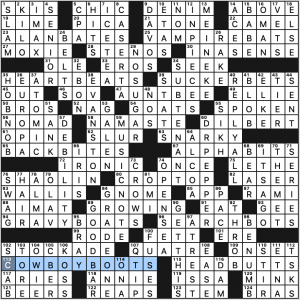 My nit about the long u aside, I think it’s incredibly impressive that, first of all, Will found a letter pattern (B*TS) that could take all ten vowel constructions, and then found common-enough phrases with those words at the ends, and then managed to get them all to fit symmetrically and just so in the grid. Nice job!

Further, with a full ten theme answers, the grid gets loaded up with constraints, but amazingly, Will still brings the fun fill. Consider AUNT BEE, NAMASTE, DILBERT, CROP TOP, STOCKADE, IN PIECES, MEINEKE, EVANSTON, SUBTENANT, REPLY ALL, DR PEPPER, OPEN SEA, Mr. GOODBAR, and “GET THIS.” Very, very nice. I also like SHAOLIN [Kung fu style developed by Chinese monks] and WALLIS [Simpson for whom Edward VIII abdicated], but that was a tough pair to have stacked atop each other.

Cluing felt very fresh throughout. In fact, I might even say it outshone the fun fill. This is why my time was higher than I’d like because I was just not on the right wavelength with the clues. But everything was legit, so no complaints here. Consider these:

That’s some fine cluing there that kept me on my toes from start to finish.

Nice theme, beautiful fill, clever cluing. What more could you ask for? 4.25 stars from me. 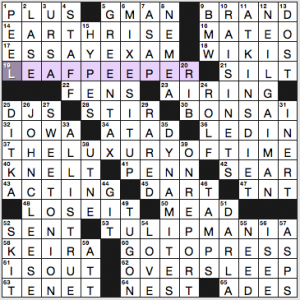 Lots of nice stuff in this 70-worder, and a few unfamiliar things. Prettiest fill: EARTHRISE, LEAF PEEPER, THE LUXURY OF TIME, TULIP MANIA. Also crisp: OVERSLEEP (so much better than undersleeping, if you ask me), JOHN CLEESE, ATKINS DIET (totally not for me), NEIL GAIMAN, DYNAMITES. Overall, the fill is pretty smooth.

And another couple things: 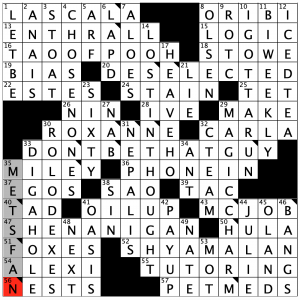 I try to be as authentic as possible when describing my solving experience. That is why there are so many error marks in the grid. I have noticed that on the live Twitch streams that they NEVER check to see if a square is correct. I am not that confident yet. Some of these entries, going across, really gave me fits (I’ll include the clues that I never saw until later!):

But I will take my time of under 14 minutes. This is getting a little easier, but there is no way I will tackle a Stumper this way; my appreciation for the elite solvers grows even more when I realize I cannot do what they do. Before I forget, Joe Deeney has a great puzzle here, too! This grid has only 66 words! This is one of the better LAT themeless puzzles I have seen in a while. 4.8 stars for this one. (I didn’t realize until early Saturday that Joe Deeney has the NYT Saturday puzzle too!)

Some clue highlights (from the Downs, of course!):

It’s supposed to snow here today! I am going to move … 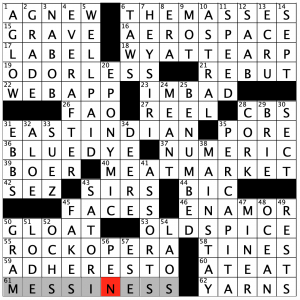 Not bad! I got a Longo puzzle done in under 15 minutes! I got smart this time: I waited until my house was empty and I had some quiet time to solve this. And it worked! This is a really hard puzzle, but this felt like a very methodical stripping away of layers until the puzzle was solved. I don’t always describe a Longo Stumper as enjoyable, but I enjoyed this one. A lot. 4.7 stars for this 70-worder.

If Evan Kalish’s byline is new to you, take note. It probably won’t be so new to you this time next year. He has quite a few in the pipe at several publications, and rightfully so.

THEME: Phrases that end with types of “tips” 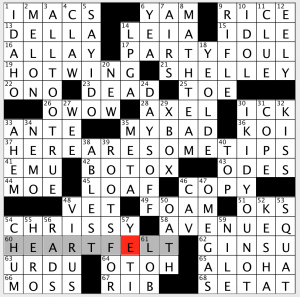 I love the revealer because it’s so blatant. Yes. Indeed. Here are some tips.

Not sure about the clue for 58A since AVENUE Q is no longer on Broadway (it’s Off-Broadway right now, and set to close next month). In my opinion, it should be clued just as a musical without the Broadway qualifier or be clued with a date [2004 Tony winner with puppets].

Evan takes a lot of pride in creating the cleanest, snappiest grid he possibly can. That’s evident here with fill like ALL TOO TRUE, I KID YOU NOT, MATH TEAM, ROOTS FOR, and DAYS OFF. Although most of those answers are longer than two of the themers themselves, they’re all in down positions, so it’s not distracting.

Coulda done without OWOW and RADS, but if that’s the price of admission for the rest of the grid, it’s well worth it.

This entry was posted in Daily Puzzles and tagged Evan Kalish, Frank Longo, Joe Deeney, Will Nediger. Bookmark the permalink.