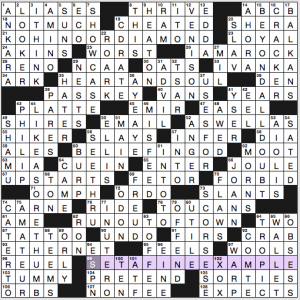 Various phrases that take the form “__ words” are reinterpreted as demanding that the all-caps word in the blank space be expanded as if it were an acronym.

The theme is a bit spotty, and it felt wildly random till I realized that all (well, most) of the clues are familiar “__ words” phrases.

Did not know: 50d. [Colonial merchant Samuel after whom a famous island is named], ELLIS.

It was fun to try to figure out the theme answers with as little fill as possible- I was able to pull off DOMINO’S LITTLE CAESARS and VICTORIA’S SECRET SHELL with only a couple letters. The cluing style strikes me as very Birnholzian with its so-ridiculous-it-works manner. Oddly enough, my favorite clue of the bunch was [U-boat, e.g.?] because of its brevity (and the resulting spot-on answer). 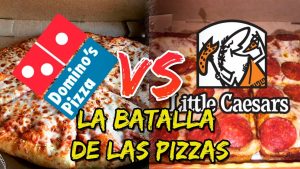 Overall, however, the theme came off as completely… normal. Evan consistently sets the bar so high with inventive and fresh concepts (see last week’s multi-layered and multi-themed puzzle), that when he does issue the occasional “normal” puzzle, it feels like a sorta kinda bummer. I kept wondering what else the themers had in common other than being corporate names. Four of them start with food chains… but the others don’t. One of them features two chains selling the same product… but the others don’t. Four start with peoples’ names in the possessive sense, but one of those was changed to create a verb phrase (WENDY’S). In other words, the theme seems so much looser than what I’m used to seeing in a WaPo.

I don’t want this to read as a complaint, because it’s not. It’s an observation. It was a joyful solve with plenty to like and a super smooth grid. But more often than not, I say to myself “I never would’ve thought of that!” or “I can’t imagine there’s any other theme answers that would’ve worked…” after filling in a WaPo grid. This wasn’t the case here, but it should also be noted that this is a perfect crossword for a newer solver (it even introduces that numbers can occasionally be used in place of letters!).

So rating this with stars becomes tough- I hate this part. 3.8 stars were I solving it in some other publications? 4.5 stars were I new to crosswords? But 2.4 stars in comparison with Evan’s other work? I dunno. It was fine. I think I’m going to forego leaving a star rating for the WaPo in the future. Seems unfair to rate one person week after week against himself.

P.S. Enjoy this classic that I had playing in the background whilst blogging! 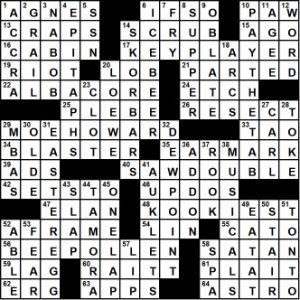 Flinchbaugh and Agard in da house! This looks like a debut for Anne, so a big congratulations- especially with it being such a tight theme and fun puzzle.

THEME: Words that start with DE in a base phrase are changed to DA (the) + homophone.

That’s a great set of theme answers. I wonder if the theme idea spawned from the DA NILE answer since that’s a familiar pun- but the others are all solid as well, especially given the constriction that they all use homophones after DA.

I was unfamiliar with CLOAKING DEVICE in the base phrase, but I’ve never watched Star Trek. It seems to be some sort of invisibility shield. Makes sense.

Great debut work from Anne Flinchbaugh! Looking forward to seeing her name in a byline again.

It’s vowel-substitution time! As the title suggests, we put OO in place of I. Wackiness results. 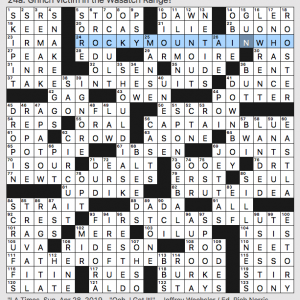 Once I dropped my objection to WHO/HIGH, I decided this was a solid and successful theme. 56a and 111a really tickled me.

What I didn’t know before I did this puzzle: that Judd APATOW directed a movie called “Trainwreck.”