There are circles in the theme entires. It’s more accurate to say that the circles are the theme entries, since each set of circles spans three answers and two rows. The words in the circles have something in common. 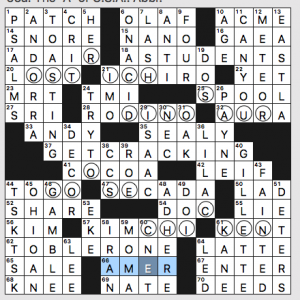 What’s the common thread? 37a tells us. [Hop to it … or what to do to the various eggs in this puzzle’s circled squares?] is GET CRACKING. I would say “what was done” because each theme answer is “cracked,” but that’s a tiny quibble. Overall this is a fun theme for a Monday.

What I didn’t know before I did this puzzle: that there’s a character named OLAF in the Lemony Snicket books. My kid didn’t read those. 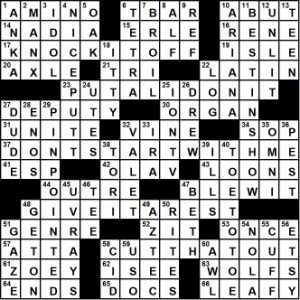 Good job, Tom and David! I like this puzzle. I like this kind of theme:  Familiar idiomatic phrases interpreted literally to create humorous clues:

I still like the puzzle. Other stuff of note includes: 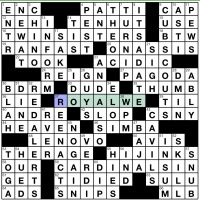 So, each themer’s first word is the singular form of a baseball team (Twins, Royals, Cardinals, Cubs, and Reds), but I’m lost other than that. The revealer of MLB does nothing for me. It was clear from the cluing that they were all MLB teams, but how does each of these teams being from a Central division make them “central” players? And the themers are all teams, not individual players. I know the dual meaning of central wants to happen here, but MLB isn’t a revealer that involves central at all, nor are any of these teams the most important (or central) teams of the MLB. And is “central player/team” even a baseball term in the first place? I hate to say it, but this theme struck out for me.

Loved: The inclusion of women like PATTI Lupone, Ann Landers and Dear Abby, and Jackie ONASSIS.
Didn’t quite love: ENC, NEHI, TENHUT, BDRM, CSNY, ENTR, DMIN, ELOI, WPM, RVER, CAVILS. The fill might have suffered from too much theme fill.

FORESAW is the central revealer with the clue [Knew in advance, and a hint to parts of 17- and 61-Across and 10- and 35-Down]. Each of those entries starts with a word that can precede “saw”. 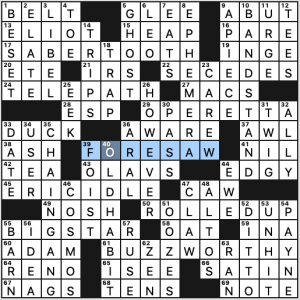 Ok, those of you who are still with me, thank you for sticking with it, though I don’t have much else to say about this clean and smooth Monday grid.

The theme is an old standard type which I think works just fine. The grid, with the theme answers in a pinwheel pattern, still has room for some shiny fill: TELEPATH, OPERETTA, ERIC IDLE, ROLLED UP, EPHEMERA, OLD HABIT. I also enjoyed seeing COSMOS and FOIST, with the former crossing BIG STAR [2003 Kenny Chesney song]. I don’t know the song but maybe country music aficionados do.

A tough, but satisfying BEQ puzzle today. Had to step away multiple times (solved most while overseeing a study hall at school, so I wasn’t fully focused on the puzzle… that’s my excuse and I’m sticking to it). 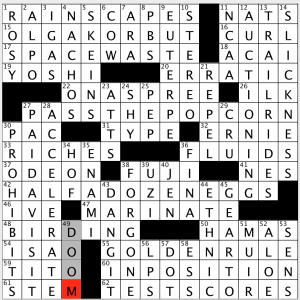 OTHER ENTRIES OF NOTE:

I like puzzles that are “a little too hard” for me. This one fell in that category today. 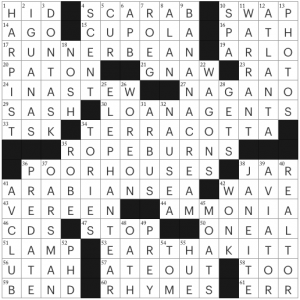