More of a recap than a review today because I did a lot of cooking this weekend, and boy are my arms tired. 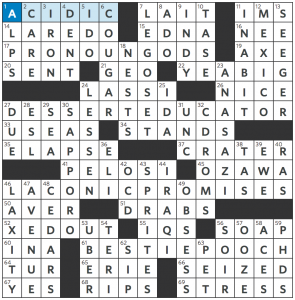 This week we’re looking for “the two grid entries that would complete this puzzle’s theme.” We have some nonsense-y theme entries:

And, a mucho grande hint:

We know from Metasolving 101 that nonsense entries are a big hint that the mechanism is orthographic instead of referential (i.e. something to do with spelling or letter patterns rather than meaning) and 12-Down suggests that some knowledge of Spanish is key. And given that the title is “Closing Numbers,” I started looking for numbers — and found them in the “closings” of each word of the entries:

There we have the numbers one through eight in Spanish, so we’re looking for entries that will have NUEVE and DIEZ anagrammed within them — and there we have them:

I thought this was a perfect 2 Metaweeks on the Gaffney Scale. Your thoughts?

Here’s [13d: Pete of folk]: SEEGER (who was my dad’s camp counselor at Camp Woodland in the Catskills in the 1950s) singing in Spanish: