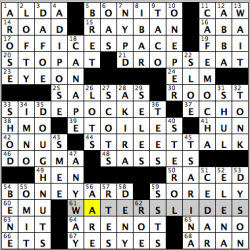 Good day, everybody! Hope all of you will get to enjoy the May flowers, a lot which are already in bloom. (I know this to be true, because I’ve seen so many pictures on social media of cherry blossoms and other flora that are in bloom right now.)

Today’s crossword is a double feature, if you will, as each of the six theme entries, all going across, is either a two-word phrase or two-syllable word in which each of the words/parts in the phrase can also be used after the word “back.”

Can’t say that I had heard of a BONITO before solving today’s grid, and that was the only entry I was not too sure about when filling in that entry (5A: [Fish of the tuna family]). Loved the paralleling foodie long fill of DOUGHNUTS (35D: [Hole-some snacks]) and CAFE MOCHA (11D: [Jesse Cook song named for a chocolate-y drink]). Interesting that the grid also went all biochemical on us, with STEROL (40D: [Waxy organic compound]) and ADIPOSE, a word I probably have not come across since high school human anatomy class (4D: [Containing fat, as tissue]). There were so many different ways I could have gone with the “sports…smarter” segment, from tennis great SELES (39D: [Tennis champion Monica]) to the “YES! YES!” chants that New York Islanders fans engage in after their team scores a goal, inspired by World Wrestling Entertainment performer Daniel Bryan (67A: [Repeated affirmative]). Our first runner-up happens to be a certain former dean of Harvard Law School who happened to be in the same place as my photographer (Yusuf Abdullah) and I when we both covered a Harvard-Georgetown men’s basketball game last month… 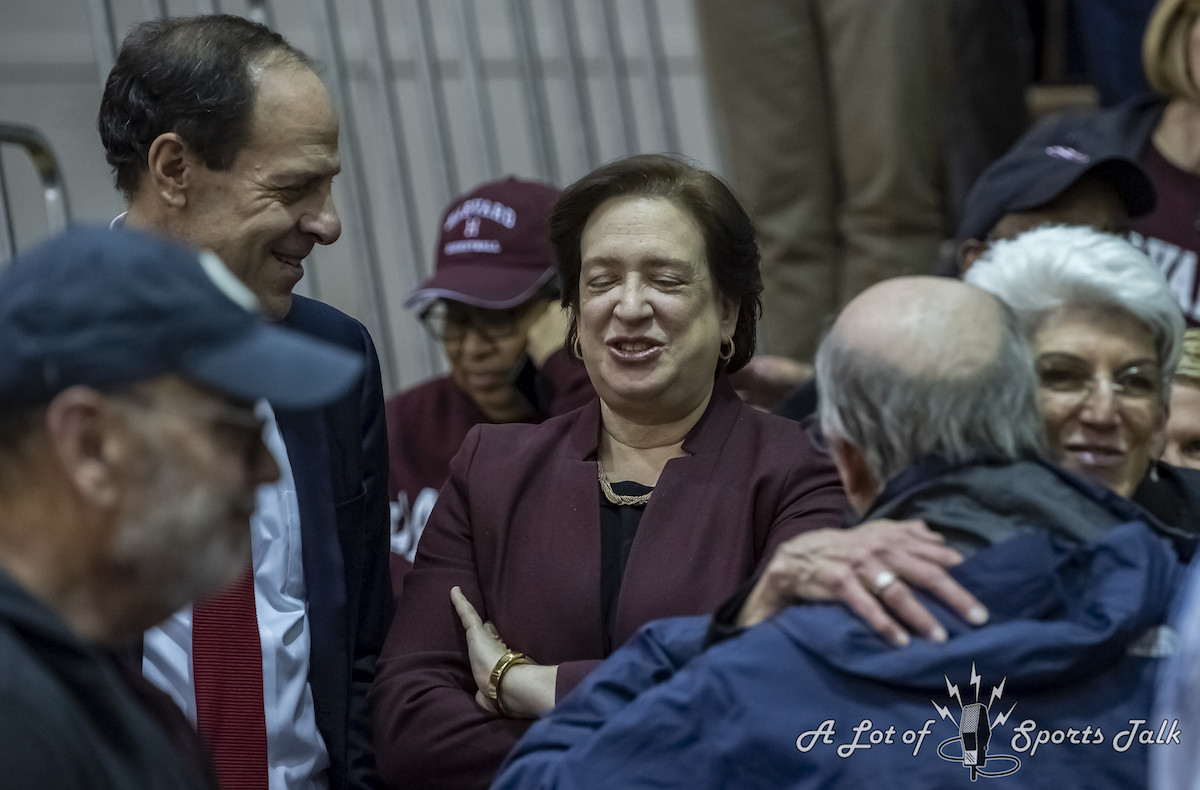 But our winner today is someone who might end up making you drool. Literally.

“Sports will make you smarter” moment of the day: ROE (62D: [Colorful sushi roll topping]) – How did Major League pitcher Preacher ROE, a five-time Major League All-Star, become one of the top pitchers in the latter part of the 1940s and early 1950s? Well, according to him, it’s because he became a master at throwing an illegal pitch: the spitball. Roe, who pitched mainly for the Pittsburgh Pirates and Brooklyn Dodgers, made the All-Star team in 1945 while playing for the Pirates but then had a couple of miserable seasons afterward. It was in 1948, upon joining the Dodgers, when Roe “discovered” his strikeout-inducing saliva special, and he started his Dodger career with six consecutive winning seasons. Roe was also the winning pitcher in the Dodgers’ only win (Game 2) over the New York Yankees during the 1949 World Series, a series the Yankees won in five games. 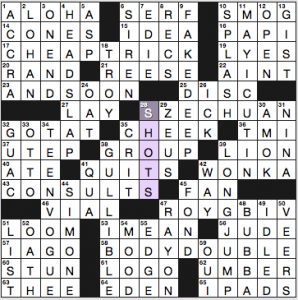 I didn’t figure out the theme till well after I finished the puzzle. The two-part revealer is 38a. [With 28-Down, multisubject photos … or a hint to the answers to the four starred clues], GROUP / SHOTS. The starred answers are two-word phrases in which each word can precede SHOTS:

3.9 stars from me. Migraine time, over and out. 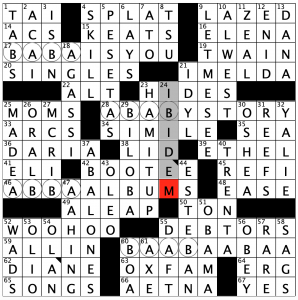 The flavortext states “same two, different order,” and that explains our theme quite easily: the letters A and B are each used twice at the start of each them answer, and all in a different order:

Straightforward theme, yet interesting brainstorming to come up with these theme answers, I would imagine. I have never heard of Baba Is You, but it is on Steam, so maybe I will be spending $15 soon! It looks like a great puzzle game, which is usually the kind of game that would be up a crossword person’s alley. (For the record, I LOVED The Witness!) And why do I get the sneaky feeling that this game title was the seed entry for this puzzle theme? 4.4 stars today. 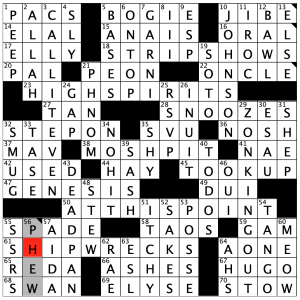 Getting faster!! This is one of my better Downs Only solves yet for a Tuesday NYT. The key with these is to try and figure out what is going on with the theme as quickly as possible, and I didn’t figure it out until I had 61A, but I was working in roundabout fashion, so that helped get a lot of the other answers. I will list here, and I am seeing them for the first time myself here!

I am a little surprised there are no circles in this grid to indicate the letters in SHIP in each entry. I have shown them in red above. It took me a minute to see them, even after the revealer. Perhaps circles would make this Monday easy instead of Tuesday? Still a fairly easy puzzle. I have been doing all LAT puzzles in Downs Only fashion for practice, and it does seem to be helping my solving. We will see how the ACPT goes next year! 4.4 stars for this smooth sailing puzzle!

Some interesting things (at least to me!) in the Downs, of course:

Have a great Tuesday!

The weather’s uncharacteristically gloomy in LA today, so I’m in the mood for some “Sad Songs.” Let’s see what the constructor has in store for us today: 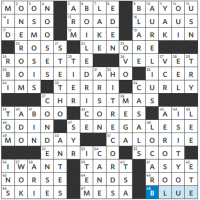 References the theme but isn’t part of it?
32D: HIT RECORDS [Seven answers in this puzzle]

So, the theme is six songs that start with the word BLUE. Aside from the fact that the themers are placed symmetrically, this seems like a weak puzzle/theme. Only 38 squares contain theme-related fill (with 40-50 being a much more standard range of theme squares per 15×15) and there’s seemingly no reason for the theme. It’s just a list of songs that start with BLUE. There’s no reveal that tells the solver why the themers are placed where they are, or why the word BLUE was removed from each one, or anything other than that it’s a list of songs. To be honest, this puzzle feels like it might have been written in 1996 alongside the LeAnn Rimes song and is just now being published. Very little in the cluing would date the puzzle any more recent than that (aside from TSA and updated clues referencing Spike LEE‘s Oscar, ARI Melber, and Argo), so it’s a miss for me.

The other reason this puzzle doesn’t work for me is NOOSES. With the significant historical legacy in our country of how those [Gallows loops] were used an primarily on whom, this seems possibly insensitive to include in a puzzle. In no way am I saying that the constructor meant for the word to be interpreted this way or have that specific meaning, but I myself can’t see that word without its attached historical significance and would encourage others to take it out of their word lists or think twice before using it.

[Theater lighting, maybe?] for ARSON also felt like too cute a clue for such a dangerous act, especially considering all the predominantly black churches in the South that continue to be victims of ARSON.

One thing I did like was the mini cake baker theme: ROSETTE, VELVET, and ICER.

Paul Coulter is keeping it in the family today with some wacky parsings of everyday words.

THEME: Everyday words parsed to be a family member + something else, clued wackily.

Oddly enough, I didn’t notice the family members until after the puzzle- which was obviously the whole point of the theme. I just thought it was imagining any phrases out of words. Derp. My bad. Probably shoulda noted title before starting.

Sure, some of these are awkwardly forced to fit the theme (especially NAN O’ SECONDS), but there’s something charming about the absurdity of the result. What do you call a temporary bed in a Scottish mother’s inn by the way? Why, MA’S COT of course!

I don’t really understand the clue for LION [Mane thing to avoid in Africa?]. Isn’t it a maned thing? Also, what if you are actively seeking a lion like that American dentist from a few years back? (R.I.P. Cecil)

I don’t really consider a TOTE a big bag either (after all, it should be easy to TOTE around), but I guess that’s relative.

Overall, a good time had. Even with a lot of POP CORN [Dad jokes?] in the themers!