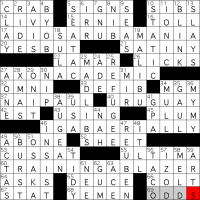 hello and welcome to episode #569 of matt gaffney’s weekly crossword contest, “Weird Neighbors”. this is week 4 of gentle april, so as usual, i tackled this one without using the instructions. what have we got for theme answers? there are four long wacky phrases:

in addition, three countries are in the grid clued only as {COUNTRY}: URUGUAY, YEMEN, and USA. what’s going on? well, the title is certainly a hint that we’re dealing with bordering nations, and all three of those countries have exactly two neighbors: brazil and argentina for URUGUAY, oman and saudi arabia for YEMEN, and mexico and canada for USA. and look, the names of those two neighbors can be anagrammed to form one of the theme answers:

that leaves I GAB AERIALLY, which anagrams to LIBYA + ALGERIA, the two neighbors of tunisia. this certainly seems like a meta that’s asking which other country should have been in the grid, so that pretty much has to be the theme answer. indeed, the instructions say: This puzzle grid contains three countries. What fourth country, whose name has seven letters, should also be in the grid but isn’t?

this felt like perhaps the easiest puzzle of gentle april, or at least the easiest one to do without the instructions, since it was always fairly clear what was going on. i guess your mileage may vary if you’re not big into geography, although everything relevant was laid out clearly enough that it seems it would have been straightforward to look up.

not a theme answer: {Rome controlled it for half a millennium} GAUL. i guess it’s far from clear what its bordering “countries” would have been.

that’s all i’ve got. i enjoyed gentle april quite a bit, but i’m also looking forward to the tougher metas that will come our way at the end of may. how about you?