When you see Alex Eaton-Salners’s byline, you know you’re often in for something with a twist. This one’s a little more straightforward than some of his other offerings, but it’s entertaining nonetheless.

Let’s see what he brought us. 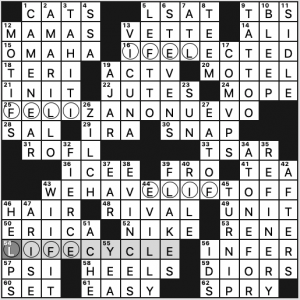 LIFE CYCLE serves as both revealer and final theme entry. Each of the theme entries has the letters of LIFE circled but not in the same order. However, they are each in a specific order as the letters cycle around. For example, looking at the L, it starts off in the fourth position, then moves to the third, second, and finally back to the first position where it belongs in LIFE. This specific ordering makes finding valid theme entries harder for the constructor, but Alex has managed to gather a fun set, in my opinion.

I don’t know if this was intentional, but the entire grid also gives the feeling of a wheel rotating around a central axis, further emphasizing the CYCLE aspect. I expect it was planned. Nice touch.

Moving on to the fill, there’s not a whole lot of flashiness. The longest entries are CAME NEAR, AMARILLO, ATONE FOR, and REFINERY. These feel more utilitarian than anything else. And entries like LEFT TO and EVINCES feel bland. With only four theme entries, I’d expect to find more interesting fare in the gird. But I did like seeing TAHITI, MOTIFS, and WII FIT. 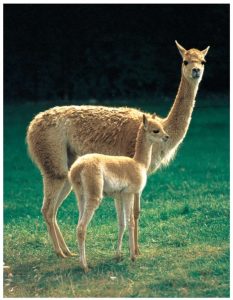 I like VICUNA as well, even though I didn’t remember it as being a type of animal [Llama’s cousin]. Looks more like the name of a drug. CO-MVPS [Harvey Martin and Randy White, in Super Bowl XII] also looks weird in the grid, and JUTES [Early invaders of Britain] are probably not in most solvers’ knowledgebase. A Germanic people, they invaded Britain in the 4th century alongside the Angles and the Saxons.

Nice theme and puzzle but I wonder if the grid design compromised some of the fill. 3.6 stars. 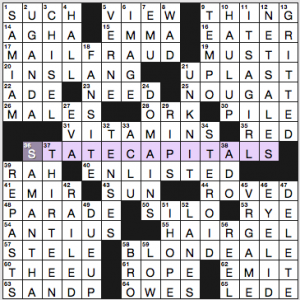 So I’ve long been a fan of geography themes, and of anagram themes. And yet, this puzzle just felt like such a dry iteration of both. 36a. [What the answers to the starred clues are each anagrams of] clues STATE CAPITALS, and those starred answers are of varying lengths, with the longest Across answers other than 36a not being anagrammed capitals.

What I liked best in this puzzle was the longer non-theme fill. MAIL FRAUD, with the topical clue 17a. [Matter for the Postal Inspection Service]—they played a role in cracking the “rich folks bribing their kids’ way into elite universities” scandal. VITAMINS. BLONDE ALE. 36d. [Killer Bee?] SAMANTHA—check your on-demand service for her “Not the White House Correspondents Dinner” special from a few days ago.

Unlikes: AGHA + EMIR; crosswordese STELE; ampersand-deprived S AND P; DUE UP repeating part of themer UP LAST and, worse still, HAUL UP crossing UP LAST; I HOPE/MUST I dupe; awkward UNKNIT. 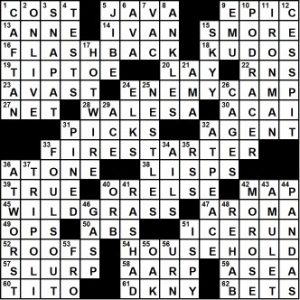 So, what we have here is a word-that-can-go-before-thus-and-such theme, with each of two words in the theme entries playing the role. To wit:

33a [Flammable material, or a clue to both parts of 16-, 24-, 45- and 54-Across] FIRE STARTER
16a [Scene from an earlier time] FLASHBACK–Flash fire. Backfire.
24a [Foes’ home base] ENEMY CAMP–Enemy fire. Campfire.
45a [Uncultivated landscape feature] WILD GRASS–Wildfire. Grass fire.
54a [Menage, in English] HOUSEHOLD–House fire. Hold fire? The latter one I’m not feeling the love on. Hold seems verby here to me, whereas all the other fire leaders are, or can be, adjectives. Plus the verb phrases I hear are “Hold your fire” and, possibly, “hold one’s fire.” Quick research shows that there is an argument to be made for “hold fire”–as a verb phrase–but that same research shows a YouTube video titled “How to hold fire without getting burned,” a green-paint usage pure and simple.

Other stuff of note includes 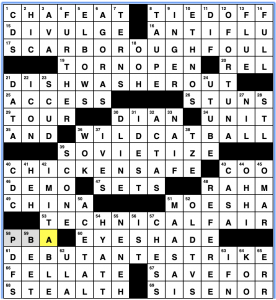 A second 4.5/5 difficulty AVCX in a row!  Spring has sprung, and that means a baseball theme is back in play.  Given that I tend to not be on Byron Walden’s wavelength AND didn’t catch the baseball connection in this puzzle for a while, this was a longer solve than usual for me.  Let’s peek under the hood at the theme:

All of the umpire calls in this puzzle are mixed up – the more common phrases are SCARBOROUGH FAIR, DISHWASHER SAFE, WILDCAT STRIKE, CHICKEN OUT, TECHNICAL FOUL, and DEBUTANTE BALL.  WILDCAT BALL threw me for a loop in its cluing – I had no idea that prospectors were referred to as wildcats, but it checks out.

Elsewhere in the fill, there wasn’t much to CHAFE AT – there was a nice blend of pop culture (MOESHA), high culture (O FORTUNA), and some solid 7-letter fill in each corner – TIED OFF, DIVULGE, ANTI-FLU, FELLATE, SAVE FOR, STEALTH, and SI SENOR.

Fun fact: NENEH Cherry’s “Buffalo Stance” was derived from the bones of a remix of Morgan McVey’s “Looking Good Diving”.  Spot her in the back of the video! 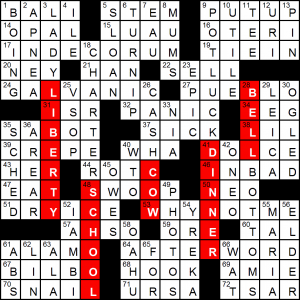 It’s a “words with” theme, only vertical and with slightly longer than typical “with words”. The hook is BELLBOTTOMS, and sure enough the bottoms of four entry can be bottomed by BELL to make LIBERTY, SCHOOL, COW (I’ve got a fever…) and DINNER BELLS. These are found in LADYLIBERTY, CHARTERSCHOOL, CASHCOW and POTLUCKDINNER respectively.