If you don’t like foreign-language words in your puzzle, this one isn’t for you. But as the title suggests, the French words contained herein are mostly basic vocabulary that many people know and that all crossworders should know.

The “Beginning” in the title has a second meaning as well. It’s indicating that each theme answer has a beginning part, which is in French, with a remainder in English. The base word from which each theme entry is taken is a standard English word or one that has been subsumed into English.

Also, there’s a nice hint at what’s to come at 1a [Hybrid language] PIDGIN. Adding that into the grid is a nice touch. 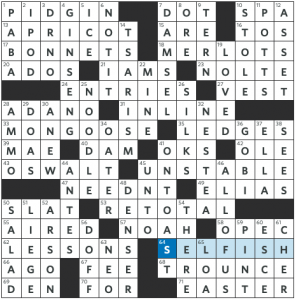 I enjoyed this. I don’t think I’ve ever seen a theme like it, so I definitely appreciate its novelty. Perhaps those of you who know French or are sticklers for linguistic purity might enjoy it less, but as someone who grew up in a house where Chamorro and English were often mashed together, I quite liked the concept. And the title is perfectly apt with its double meaning.

I didn’t enjoy those little sections in the West and East with ADANO and DOAS (clued [“CSI” extras]) and the crossing proper names ELLA [“Boo’d Up” singer ___ Mai] and ELIAS [Pettersson of the Vancouver Canucks]. If ever there was a need for a “cheater” square, this is it. Place one at the first A in ADANO and change it to NANO. MAE can become ODE and you’d have MOO and NODS in the Down direction. In the East, the cheater square would replace the S in ELIAS which you could change to ELSE leaving GOBS and ELLE in the Down direction. Pretty easy fix for a marked improvement in fill (IMO).

But aside from that, the fill is good with GINSENG, NOODLE, ON TOAST, and ALL OF US  [Sitcom of the 2000s co-created by Will and Jada Pinkett Smith]. I don’t remember the show, but I like the entry.

The puzzle took just over five minutes. It took me at least that long to suss out the theme once I had the grid filled in.

All the theme answers have the first letter of a base phrase moved to the end to create something wacky, which is then clued accordingly. They all go down, so they are standing on their heads, as per the title. 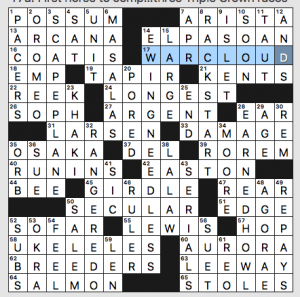 The nonsense phrases are worthy of a Cuckoo Crossword, the base phrases are all in the language, and the “aha!” moment was gratifying. I liked it. 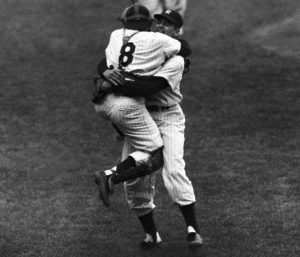 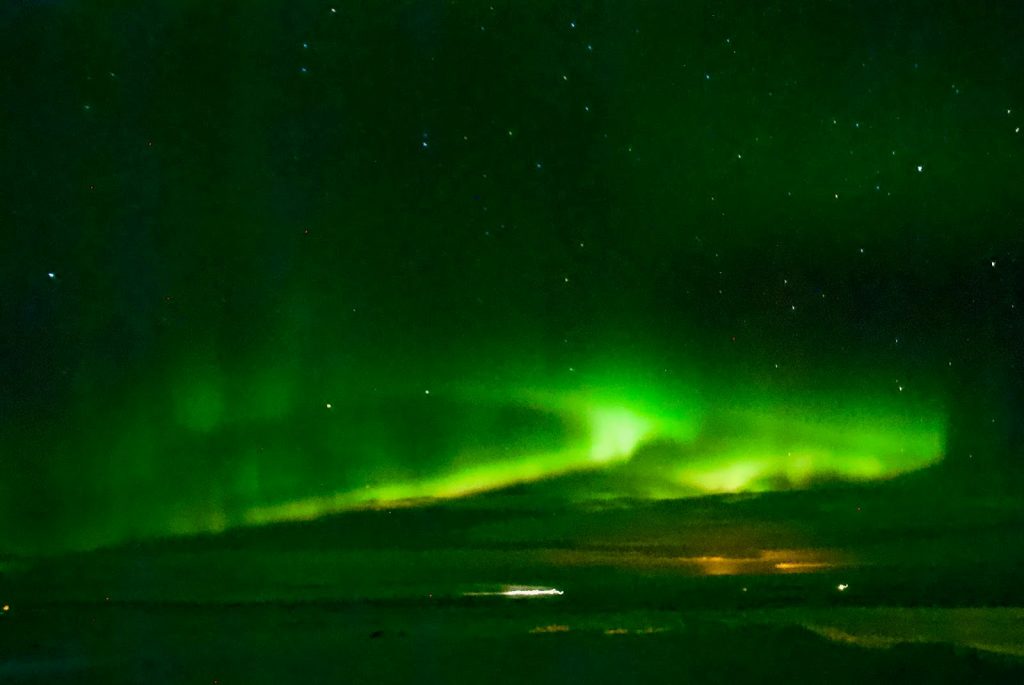 What I didn’t know before I did this puzzle: that WAR CLOUD was the first horse to compete in all three Triple Crown races. 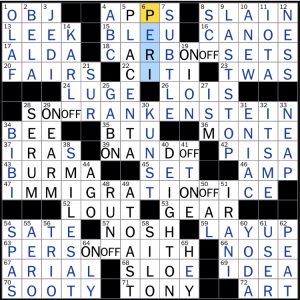 It took me forever and a half to figure out what was going on with this week’s puzzle – I could have used something in the clues to point me to what felt like the revealer here:

39A definitely feels like a revealer, given that it breaks the pattern of (ON) squares and (OFF) squares next to one another, but I could have used a little nudge to get me thinking in that direction.  I had PARISHONER instead of PERSON OF FAITH for a while, and knew that 18A was pointing towards some sort of CARBON OFFSET or tax, but couldn’t put two and two together. 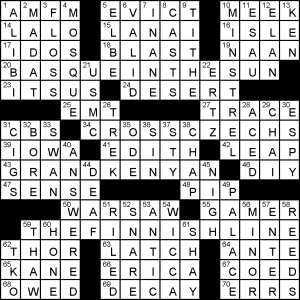 This puzzle theme is all over the place, in more ways than one. It features demonyms, more or less. Three are more or less homophonic: BASQUE/BASK, CZECHS/CHECKS, FINNISH/FINISH, but KENYAN/CANYON have clearly different sounds. CZECHS is randomly pluralised. FINNISH is an adjective unlike the other pun formations, which are nouns. And BASQUE is not associated with an independent nation, unlike all the others. When each of the answers is different in some way to the other three, that’s a pretty big flaw…

Not really much going on outside of the theme. The longest pair outside of the theme are ANSWERED and MINSTREL. A couple of oddball shorter answers: [Doorbell ringers’ response], ITSUS; pretty arbitrary.
[Tight end Zach who scored the go-ahead touchdown in the Eagles’ only Super Bowl victory (2018)], ERTZ; what a ridiculously precise clue that! 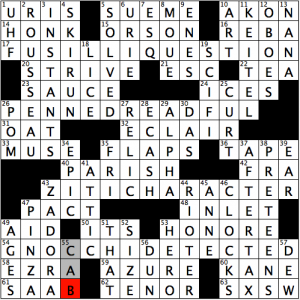 After last week’s off-the-wall BEQ Thursday puzzle, it was nice to have a return to normalcy. Fairly straightforward Italian cuisine puns today:

Plus, a rotini tiny bit of a bonus answer at 23a, SAUCE [Covering for this theme’s answers].

A nice breezy solve for me, and I thought all the puns were funny.

Answer of the day: 9d, ENES [Portland Trail Blazers star Kanter]. If you haven’t seen the way Portland eliminated the Oklahoma City Thunder (Kanter’s onetime squad) in Round 1 of this year’s NBA Playoffs, well… you’re in for a treat.