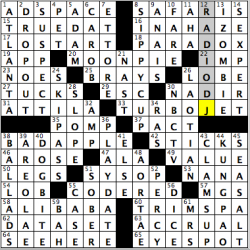 Good day, everybody! Here’s hoping you do not mind a pinch-hitting appearance from me (Ade) for today’s puzzle, brought to us by Mr. Trenton Charlson. This was a fun and fairly straightforward solve, though I do have one slight bone to pick and it deals with the entry that had the word “bones” in it, DICE (56A: [“Bones”]). Depending on where/when you grew up, “bones” probably either refers to dice or dominoes, and the second I saw the clue, my mind immediately went to dominoes since I grew up playing that and hearing the specific jargon in question! Seeing just those four squares for the entry totally threw me off since I had not heard that slang (“bones”) for dice until today. Or, at the very least, I don’t remember ever hearing that before. I’m pretty certain both those game-playing instruments were made from animal bones at some point. Anyone else thought along the lines of dominoes as well when first seeing the clue?

Though I don’t remember hearing “bones” used as slang for dice, I’m more well-versed in the “Give me and RC Cola and a MOON PIE” (20A: [Dessert traditionally served with an RC Cola in the South]) line, as a friend of mine who was originally from Kentucky used that line from time-to-time when I worked as a RADIO DJ for the ClearChannel station(s) in Salisbury, Maryland (12D: [Record holder]). Though, while a DJ, I definitely did not actually hold a record (e.g. vinyl record, CD, etc.) in my hand when playing the Top 40 music of the day. All those “records” are just keyboard strokes away on a computer now. Le sigh!

Our constructor must be a Clue aficionado, with both SUSPECT (3D: [Any character with a token in Clue]) and MRS. in the grid referring to the board game (61D: [___ Peacock]). My favorite clue/entry combo was probably the one for DROPOUT (2D: [One with no class?]). Wasn’t too much of a fan of both AREOLAE (39D: [Biological rings]) and AORTAE plurals in the grid (48D: [Blood lines]). Actually, PLAYDATE had a pretty slick clue as well (36D: [Recess appointment?]).

“Sports will make you smarter” moment of the day: ETTORE (7D: [Automaker Bigatti who reportedly said “I make my cars to go, not to stop”]) – First off, love the quote! Second, I’m going steer away from cars (pun not intended) and mention ETTORE Messina, who currently is an assistant coach for the San Antonio Spurs of the National Basketball Association and, before his time in the NBA, established himself as one of the greatest head coaches in the history of professional basketball in Europe. Messina won four EuroLeague championships, two while coaching Italian side Virtus Bologna (1998, 2001) and two at Russian giant CSKA Moscow (2006, 2008), while his career record in EuroLeague competition was an astounding 279-98 (.740)

(For those who don’t follow basketball in Europe, let alone basketball in general, the EuroLeague is a season- club competition/tournament involving top-ranked teams in multiple European leagues across the continent, akin to the UEFA Champions League in soccer. I’m sure that comparison to soccer I just made did nothing for a lot of people here in terms of understanding the tournament any better. ¡Lo siento, mis amigos!)

Thank you so much for the time, everyone! Have a great weekend and be well! 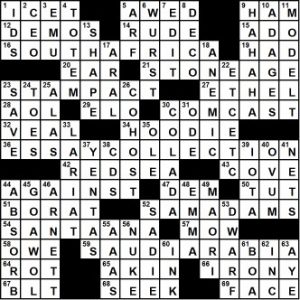 Evan’s ESSAY COLLECTION consists of two-word ILSA’s with the pattern S* A*. And it winds up with a ton of theme squares involved. In addition to the 15-letter item above, we have

Do the math, and you will conclude that this totals up to approximately a ton of theme squares. Other stuff of note (inclusive of some from the Across pool) are:

Happy Friday! I’m happy to celebrate the end of a week on call with Natan’s great puzzle. The New Yorker schedules harder crosswords on Monday and easier ones on Friday. This is one of the most pleasing not-very-hard puzzles I’ve done in a long time.

The fun for me started at 9a with [Fixture of many a dorm room]: BONG. I also liked the NW corner, which included 13a [Delivery that doesn’t require a driver], HOME BIRTH, and [Free from blame] at 17a, which turns out to be a verb, not an adjective: EXONERATE. We also get two Q’s without U’s: Shaq ATTAQ at 7d and QATARIS at 35d.

35a is my early favorite for Clue of the Year. [Butler did it] references Judith Butler, and the answer is QUEER THEORY. I love seeing this in a puzzle and I love seeing Butler given the credit that is due her. 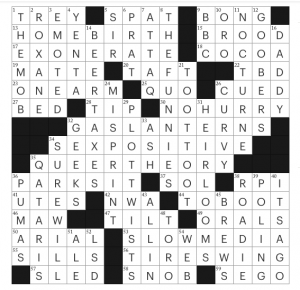 What I didn’t know before I did this puzzle: that Jeff Goldblum and Idris Elba are slangily called DADDY. A bit of searching explained that this means “an attractive man of an older age” and I don’t really want to think about that any more than I have to. 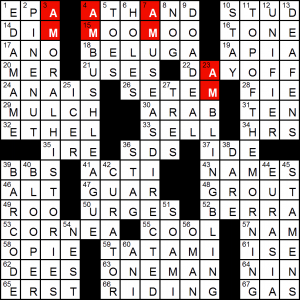 This busy letter addition theme has four long themers, all with +AM, as well as a full-length revealing answer – TOPOFTHEMORNING. It is clued as a “supposedly” Irish greeting, a rough way of saying that the use is largely historical. 69 theme squares is very high, I think part of the reason was to put the AMs not only at the top of the entries, but at the top of the columns, as well as to have at least four altered entries plus a revealer.

With all that theme, most of the rest of the puzzle is damage control. I did enjoy the edible EDAMAME/PINENUT opening, though hold the MULCH.