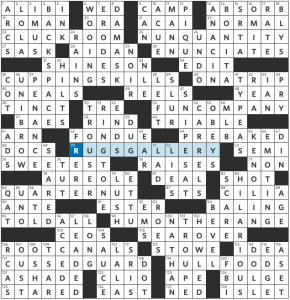 Some of these aren’t bad, but nothing about this gets me excited, and the ones that are off bring the rest down.

I’m further bothered by kludgy bits in the fill like TRIABLE (60a, [Worthy of judicial review]), SEA ROVER (105A [Pirate]), ONEALS, ARN, BLYS, EMS, ROES, SRIS, and singular TROUSER (though it’s rescued somewhat by its clue, singular [Pant], which I found amusing).

But while the nits don’t outnumber the stand-outs, they do sap their strength. In a 21x grid, which can easily turn into a slog, I feel it’s better to comb through that fill and make it as squeaky clean as possible.

Some good wordplay here and definitely some good fill, but for me, I felt some theme entries needed tweaking and some of the fill could’ve been cleaned up. 3.4 stars.

And now…you asked for it, so here it is. Manilow singing Copacabana. (Best Youtube comment: “Willy Wonka got a good career after leaving the chocolate factory.”) Enjoy! 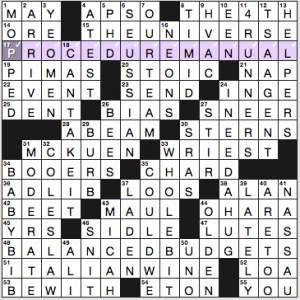 Yeah, so I hate this puzzle and its theme on principle, the principle being that (a) nobody really says “May the 4th” for the date, and (b) this “Star Wars Day” nonsense has crapped all over what used to be a perfectly lovely date for one’s wedding anniversary (28 years!). We’ve got a 3/6/6/3 mini-theme spelling out MAY / THE 4TH / BE WITH / YOU. Each of them is clued as a stand-alone entry, but BE WITH is a terrible entry unto itself, and MAY is gratingly clued as [Could] when 35d is COULD WE. And if you’re going to have THE 4TH as a themer, maybe don’t plunk THE UNIVERSE right below it in the grid, as the extra THE jumps out.

Top fill: CAN’T TAKE IT, ITALIAN WINE, BALANCED BUDGETS (although that clue is a lie, [Goals for fiscal conservatives]—the Trump administration has been moving further away from a balanced budget, and now it’s the Blue Dog Democrats pushing for a Balanced Budget Amendment that is likely to again go nowhere), COLESLAW in its entirety, “I NEED A HUG,” TSA AGENT, SEUSSIAN. Toyota 4-RUNNERS are legit but I’m sure that numbered square vexed a ton of solvers not expecting to find a numeral in the grid outside of a Thursday puzzle.

Not keen on: BABY BIB (redundant, as any bib is for babies unless it is otherwise described, like a lobster bib), ABEAM, ETON clued as [Radley rival] (why on earth would any of us know that?), A-TEST, plural abbrev SRAS.

Two stars from me because of the dreaded “theme” and some clunky fill/clues. Ardent defenses of “Star Wars Day” will be met with distinct dismay from me, so proceed with caution, commenters. 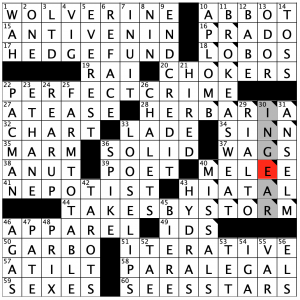 I think these Downs Only stones are still tough, but I wouldn’t call it agony. Tough one here, especially with no theme to figure out. There are some awesome Across entries in here (WOLVERINE!), although some of them are hard to get without the clues. Most of the issues, as you can see by the error marks, are on the eastern seaboard. Pawel makes good puzzles; please make more of them! A firm 4.5 stars for this one.

Some of the best (Downs Only, of course!):

That’s all for now! Have a great weekend! 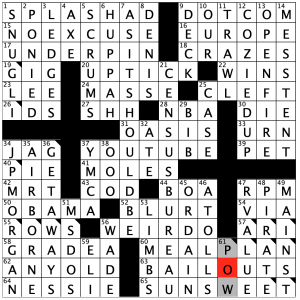 Lester Ruff’s puzzles (Stan’s!) are usually “less rough,” but this one gave me fits. Well over 20 minutes on this solve, and that hasn’t happened to me in a while. Either I am stressed out, or this was a tougher Stan edition than normal. Curious to know what others thought. 4.3 stars, but this one left bruises.

Ironically, some stuff I liked:

Off to see the Avengers movie later this Saturday. At an IMAX!

For some reason, I now have the song “Do You See What I See?” stuck in my head. Great. I don’t even like that song at the appropriate time of the year.

THEME: Homophones with words beginning with C then S.

I like that, rather than giving us a simple arbitrary homophone pair, Daniel put himself under stricter construction rules dealing strictly with the C/S sound. Answers themselves all work for sure.

CEILING SEALING would work much better as a verb phrase (the way it’s clued now, it sounds like the answer should be CEILING SEAL as no one calls a cover a SEALING), but that would be inconsistent with the rest of the themers. It’s also broken up across two answers though. I don’t mind it, but the puzzle wouldn’t have suffered without it either.

I’m also a bit confused as to why the CELLAR SELLER is clued as a wine merchant. I get that wine is stored in cellars, but “storage area” is already in the clue. I think it would’ve been more fun/ridiculous if it were someone actually trying to sell cellars.

Solid grid. Favorite non-themer was CUT IN LINE both as a colorful phrase and as clued [Act like a rude waiter?].