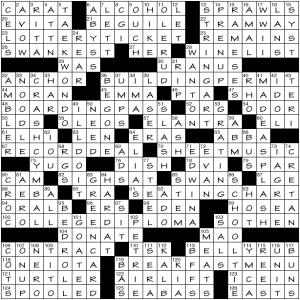 These are genuinely very clever, and I’m impressed.

A few clues strongly stood out during the solve, so I’ll highlight them first.

On the flip side, here are the clues and/or entries that felt strained:

Overall, I really liked the execution of the theme, despite it not being an out-there or flashy foray. 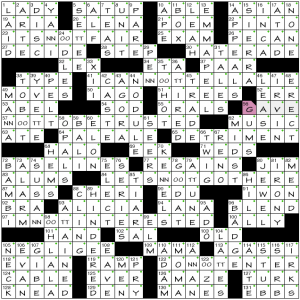 Before we get to the nut of this crossword: the version furnished to me had an error, which I’m presuming will have been fixed by the time it is printed/goes live. The answer key wanted a G in the square with number 56, but the clues most definitely want an S: 56a [Preserve, as in Word] SAVE, 56d [Combining results] SUMS. [edit: see Evan’s note in the comments]

Moving on. The theme plays on the title—aptly enough—twofold. First, the letter sequence N-O-T, not, has the letters doubled in the themed across entries. The doubled letters comport properly with the crossing entries, which require the doubles. Second, the phrases in the themers are clued opposite from the way they are normally expressed. Hence, the letters are literally doubled and the double negatives negate the senses of the sentiments. And that’s why the clues have question marks.

Imaginative theme and execution. I enjoyed it. Noticed a preponderance of ATT* entries among the relevant downs, and half of the six themed acrosses were expressed as quotes, which seemed a little odd. Those are minor nits. 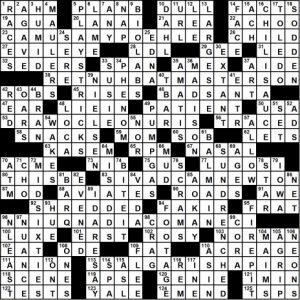 Brilliant work by Pete here! We have certain 3-, 4-, and 5-letter patterns that form one name left-to-right and another right-to-left. From this we discover 2-unit names of well-known people, two per theme entry, one in each direction:

And there are many other fine entries in this puzzle, as well:

Marion, Miss.–Jim is on the road (though, so am I), so I subbed in on short notice. I’m squeezing this review in on a Sunday morning as I teach a 6-year-old how to make a quarter disappear, watch a 4-year-old build a tower with cardboard bricks, and discuss the administrative law implications of yesterday’s Kentucky Derby results with my niece and nephew-in-law. 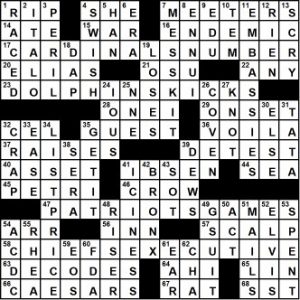 This grid also contains some “not so much” entries: MEETERS,  ONE I, SST, ENNUI, RIEN, SCRY, DAP, DEWS, ICINESS.