This is one of Peter’s easier puzzles. The theme is straightforward and revealed with two answers at the bottom of the puzzle. 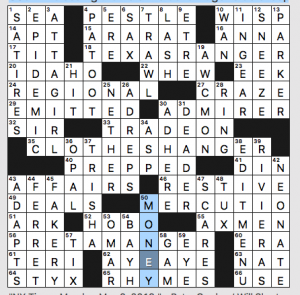 And the revealers: 59d [With 65-Across, what the last words of 18-, 35- and 56-Across are to each other] is EYE RHYMES. I’ve seen “sight rhymes” more often, but that’s a minor quibble. It’s a perfectly adequate Monday theme which didn’t add anything to my enjoyment of the puzzle. On the other hand, it didn’t subtract anything, either.

What I didn’t know before I did this puzzle: I’d never heard the quote at 50d [“A blessing that is of no advantage to us excepting when we part with it,” according to Ambrose Bierce]. That’s a Patented Peter Gordon Very Long Clue for MONEY.

It’s always nice to see a new byline! Ali Gascoigne’s American debut ran in the NYT in February, but he makes his WSJ debut today. Congratulations! He’s a London-based crossword “setter” as they’re called across the pond, but it looks like he’s branching out to give us Yanks a bit of what for.

Judging by the title I was right to expect two-word phrases with the initials P.G., but I thought there might be 13 of them, which would probably be impossible to pull off. Instead, there are…four of them. I’m not getting what the 13 is referring to yet. Maybe it’ll come to me. But each is clued with a fun bit of wordplay. 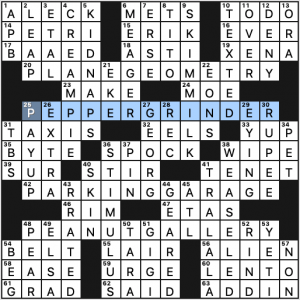 It just dawned on me what the 13 is referring to here. Each of the above entries is 13 letters long. Thirteen-letter entries are typically not fun to deal with as a constructor, especially as your first and last entries in the grid. They can’t go in the 3rd/13th rows because the blocks on the end(s) would force two-letter words in the Down direction, and that’s a no-no. Instead, everything gets squished into the middle of the grid, causing extra constraints for the constructor.

But it’s handled well here. I especially like the layout of the four themers; the centered design makes it visually appealing. And the fill coming into and out of the center, as well as what’s in the center, is all strong stuff. CREAM PIE, KIDNAPS, SKIM MILK, WEASELED, STIMULUS, and TRA LA LA (in its entirety) are all solid.

Good on Ali for picking up American sayings like R-RATED and spelling things like MEAGER “correctly.” Plus there’s quite a bit of American pop culture in the clues as well.

Seeing ALECK [“Smart” guy] was an eye-opening way to start the grid, though. I think I’ve only ever seen it spelled ALEC. And sorting out whether 33a [“Sure thing”] was YES, YEP, or YUP took some doing. Aside from those little trouble spots, everything else felt smooth.

A nice debut. I look forward to seeing more from Mr. Gascoigne in the future. 3.7 stars. 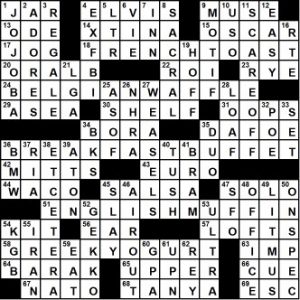 THEME
Clever title. Familiar theme. That the theme has been done before does not take away from its legitimacy. It does, however, make it familiar. We have here

It’s clever,  and there’s nothing wrong with it. It’s simply a theme that comes around a lot, sometimes with a new angle.

All of the above is horizontal. And, at 11-13-15-13-11, you know what that bodes for the balance. This grid has 28 three-letter answers, not counting the TON in A TON, among them quite a few abbreviations and initialisms. Two 8-letter ILSAs* squeeze into the Down answers–ET CETERA and SCARE OFF. They are joined by JOJOBA, EX-FBI, AIR OUT, and ON SPEC, all of which are kinda nice. 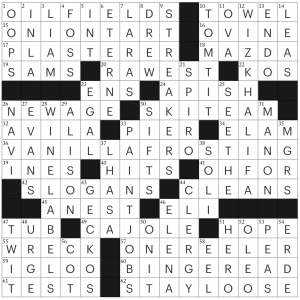 Today’s New Yorker was a comparatively breezy solve for me – just over six and a half minutes.  Let’s dig in:

This felt a bit more slight than some other recent Monday New Yorkers, but was enjoyable nevertheless.

Today’s LAT puzzle is brought to you by the Wheel of Fortune bonus round: P_LL 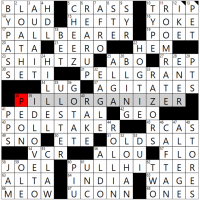 Strong, consistent early week theme. My only slight ding is that all but one have the format of P_LL ____ER, where the second word indicates an action. PELL GRANT breaks this trend, but I can’t think of anything else that could have been used for PELL. Maybe one of the other ones could have been changed so that the rest didn’t adhere to such a consistent pattern? Either way, a fun solve that I was able to pick up on quickly. I also enjoyed that there were some scrabbly (but gettable!) words in this grid, which is only a Q and an X away from being a pangram.

Other random thoughts:
– The clue for INDIA – [Where to find Delhi sandwiches] – feels too cute by half, since sandwiches aren’t an Indian dish. I understand wanting a good pun, but it should at least make sense, given the context.
– There’s a slight dupe between TYPE and [Blood-typing letters] for ABO.
– The shade of having LOHAN next to DUI, though!

A snazzy pangram from BEQ today! Difficult, though. I was legitimately surprised when Mr. Happy Pencil appeared telling me I didn’t screw up.

Lots of bite today! I liked it.