Last week I referenced a possibly apocryphal Metasolving 101, and enough people thought it was or wanted it to be a real thing that we* are for real working on it, and your patience is graciously requested until it is finished.

*we = Team Fiend, plus whichever of my usual Metasolving buddies whom I can rope into contributing by plying them with beer and hints 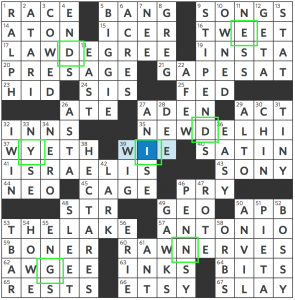 This week we are being asked to find a motion. Ohh … kay … that seems rather specific. There doesn’t seem to be much going on in the grid, theme-wise, so, as we shall learn soon from Metasolving 101 (see what I did there), it’s likely that we need to find something orthographic, i.e. having to do with the letter placement in the grid (that’s how I’m defining orthographic today).

There’s a big hint right there in the center:

such that the letters N, E, S, and W, the initials of the four cardinal directions (north, east, south, and west), form a circle, proceeding clockwise, around the letter I. This seemed like a breakthrough but I had a little bit of a cognitive burp at this point; I nosed around the grid for a bit until I noticed that there are six other instances of the four cardinal directions extant in the grid (hence, I assume, the title “Going in All Directions”). If you take the center letters of each of the “compasses” in the grid, you spell out the word EDDYING, which indeed is a motion, and this week’s contest answer.

I thought this was nicely done! Had the title been “Going Around in Circles,” I wonder if it would’ve been easier? A couple folks in the solving group had to check in the ol’ dictionary to see if EDDYING, spelt thus, was truly a word. It is somewhat unusual, but familiar to me due to an interesting quick of geography, in that there is a town in upstate New York called, and spelt interestingly, Fishs Eddy (and the namesake for a Manhattan housewares shop), that we used to drive by on our way to the Finger Lakes, and it sounded so weird that I happened to have once done a little research on the word eddy and also, it inspired the variant plural fishs to become somewhat of a running joke in our household. (“What’s for dinner, Laura?” “Fishs.” “What sort of fishs?” “Salmon, with creamed spinachs on the side.”)

I second a motion.