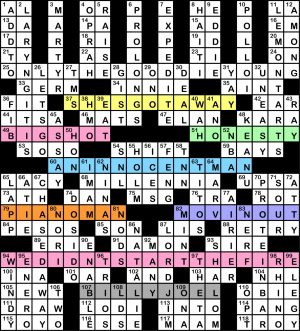 Good day, everybody! Here is hoping all of you are doing well. If a constructor is going to go away from standard operating procedure in terms of constructing norms (e.g. every entry being at least three letters long), then a grid like the one Ms. Gorski has produced today is definitely one to emulate and appreciate! The grid is a tribute to one of the iconic musicians of our generation, BILLY JOEL (107A: [Born 5/9/1949, the iconic performer of the asterisked songs]), as he gets ready to perform on his born day at The World’s Most Famous Arena, MSG (75A: [On 5/9/2019 (his 70th birthday), 107-Across will play his 110th concert at this NYC venue]). The reason for the two-letter across entries and the stand-alone down clues above is to form the keys to the piano keyboard that’s on display, which is just amazing!

The execution of the grid and what it tried to convey is what should be the focus, and it is hard for me to try and single out other parts of the grid because of the sum of all the parts. At first, I thought something might be up going across the stand-alone down entries, but no dice. The OBIE Awards are this month, and it reminded me of a couple of wonderful off-Broadway plays that I got a chance to write about/cover and now wish I could do that a little more (110A: [Theater award]). I personally know one wonderful director, Layon Gray, who had a couple of well-reviewed off-Broadway plays that I covered, including Black Angels of Tuskegee. Definitely hope you look it up and that there’s an opportunity to see a recording of it online. I’m in Boston at a basketball game at the moment and I’m sharing the same breathing air as MARV (64D: [Sportscaster Albert]), who is here for TNT broadcasting this Milwaukee Bucks-Boston Celtics NBA playoff game (52D: [Hoops org.]).  OK, we start the blog with Billy Joel and we’ll end it with him…sort of.

“Sports will make you smarter” moment of the day: WE DIDN’T START THE FIRE (94A: [*Hit song with the lyric “Einstein, James Dean, Brooklyn’s got a winning team”]) – What’s being referenced in the “Brooklyn’s got a winning team” part of the song is, almost certainly, the 1955 Brooklyn Dodgers baseball team that finally won the World Series over the hated New York Yankees after the Yankees had defeated the Dodgers in the Fall Classic five different times over a 15-year span prior to that (1941, 1947, 1949, 1952, 1953). The series victory in seven games over the Yankees was the only World Series the Dodgers won as a franchise while in Brooklyn before moving to Los Angeles in 1958. Since then, the Dodgers have won five more World Series titles, but all while located in the shadows of Hollywood (1959, 1963, 1965, 1981, 1988). 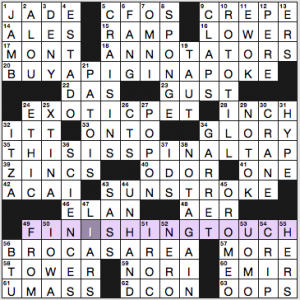 Long day, plus an early day tomorrow, so let’s be quick. Revealer: 49a. [Icing on the cake … or a hint to 20-, 24-, 35- and 43-Across], FINISHING TOUCH. The other four themers end with words that, in other contexts, are also a type of touch: BUY A PIG IN A POKE, EXOTIC PET, THIS IS SPINAL TAP, SUNSTROKE (less common than generic heatstroke, no?).

39a. [Anti-rust coatings], ZINCS. Why clue this, weirdly, as a plural noun when it’s also a verb? 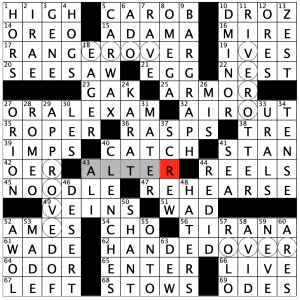 The flavortext says we are “cycling through,” and in a literal sense. All the them answers have the iterations of the word OVER if you keep moving a letter to the end. So we have OVER, VERO, EROV, and ROVE represented in sequence in the theme answers:

I was thinking it would be nice to have a revealer, but there is no way to do that cleanly and not repeat a word. TURNOVER quickly came to mind, but that may have actually made the puzzle worse. There are circles and a title, and in this case that seems to suffice, whereas in NYT or LAT puzzles that generally have no titles during the week, things are a little different. Fun puzzle this week, and not too hard either. 4.3 stars today.

Some high points for me: 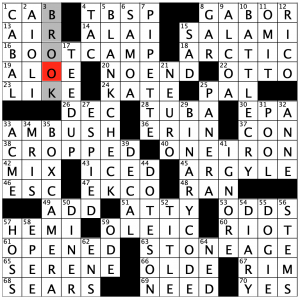 Even though I was solving Downs Only, I had an idea of what the theme was fairly early on, especially since most of the theme answers are in the downs. The revealer appears to be in the clue for 63A, but that also seemed evident while solving. Here are the themers:

So all of the theme answers have the initials “B.C.”, like the famous comic strip that has been around for years. (According to Wikipedia, it has been around since 1958, although the original cartoonist passed away over ten years ago.) Not too complicated, but then it shouldn’t be on a Tuesday. Nice puzzle, Mark! 4.4 stars for this one.

Some highlights for me (from the Downs Only, of course!):

P.S. Why is “post script” a thing, but not “pre-script”? I consider this my pre-script right now, but I don’t know how to abbreviate it.

THEME: The letters PS are added to the ends of base phrases to create wacky ones.

Cute add-some-letters theme with PS aptly at the end of each of the themers. BUMBLE BEEPS and USE THE FORCEPS both landed strongly for me. With only three theme answers (not including the revealer), I would’ve liked the third to be equally as strong and entertaining. However, MARGARET CHOPS uses MARGARET CHO as the base phrase, then simply clues a different Margaret (the others feel like they undergo more of a change).

I liked the clue for CHEETOS [They stain your fingers orange] because it is totally accurate. I don’t know of anyone who has successfully polished of a bag of CHEETOS without some funky looking fingertips afterwards. Takis have the same effect. Just red instead. 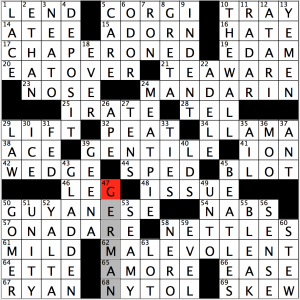 Gary Larson wrote last Thursday’s puzzle, took Friday off, wrote the big 21×21 puzzle for Saturday, had a nice long weekend, and now he’s back with the Tuesday. That’s some Mike Shenk-level prolificness right there!

Meanwhile, as far as I can tell, the last time a woman constructor wrote the WSJ puzzle was March 26th. (April 10th if you count the wonderful women of the JASA Crossword Class.) I’d love to hear from the WSJ team, as well as any women constructors who do or don’t submit there, about why this might be the case. Comments section is open, and so is my inbox.

Onto the puzzle. The starts of five answers is where the boys are:

I thought this gimmick seemed familiar, so I searched Crossword Tracker and found this puzzle from exactly a month ago (same GUYANESE clue, even!). The duplication didn’t detract from my solving experience at all. I like the revealer and the sequential nature of that version; I love how smooth the fill is in this one. Only SEAMY and a smattering of proper nouns (never heard of NYTOL or THE WALL; only know YALTA from puzzles) felt a bit tough for an early-week puzzle. There’s not a lot of flashy long answers, but it’s so well-crafted that I don’t need those.

Thanks to Larson et al. for the workout!