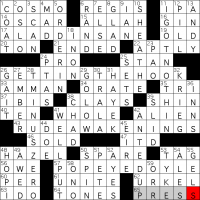 hello and welcome to episode #570 of matt gaffney’s weekly crossword contest, “Funny Guy”. as usual for a week 1 puzzle, i tackled this one without using the instructions. what have we got for theme answers?

i was pretty sure i had this one from the title and the first two theme answers, as robin williams was a funny guy who starred in both aladdin (1992) and hook (1991). the other two actually didn’t help me at all, as i was unfamiliar with both awakenings (1990) and the popeye movie musical (1980), but a post-solve google confirmed that they also starred robin williams. so there you have it.

this is a simple meta, certainly straightforward enough to be a week 1, but i wonder if there aren’t a lot of people who really wouldn’t be able to do it without google. that feels less satisfying, i think. certainly the ALADDIN in the first theme answer plus the parenthetical 1992 suggests robin williams; while there are other actors from that film, probably only gilbert gottfried (who voiced iago) qualifies as a “funny guy”, and he is considerably less famous than williams. can you name either the actor who voiced aladdin’s speaking role or the one who provided his singing voice? if so, you might be a hard-core disneyphile, because i certainly couldn’t. i know lea salonga provided jasmine’s singing voice; i couldn’t have told you who did her speaking voice.

anyway, while aladdin is certainly very famous, and hook is a well-known movie that famously starred robin williams also, i am less sanguine about the other two. i think i’d heard of awakenings, but didn’t know anything about it (including who was in it), and i had really no idea about the 1980 popeye (apparently williams’s first starring role). from the point of view of the meta, i guess it makes sense to stick to one-word movie titles (you can’t really disguise GOOD MORNING VIETNAM or DEAD POETS SOCIETY or MRS. DOUBTFIRE in a theme answer!), but then your options are basically just these four movies. i guess JUMANJI is another one-word title, but it’s not part of any longer theme answer. so while the meta is basically fine, it was not really sparkling from my point of view.

in the fill, {“Just tell me the answer!”} I GOT NOTHIN’ was terrific; many an elusive meta has resulted in me saying that either out loud or on this blog. i also found {Make crude personal attacks against someone} GO LOW to be fresh and intriguing.
{Response to hearing a nice turn of phrase} WELL PUT, if you will.

that’s all i’ve got this week. how’d you like it?