Another WSJ debut, and it’s another goodie. 53a is clued [“Instant” instructions, and how to complete this puzzle’s starred clues] and is answered with JUST ADD WATER. Said starred clues need the word “water” in order to make sense with the answer in the grid. 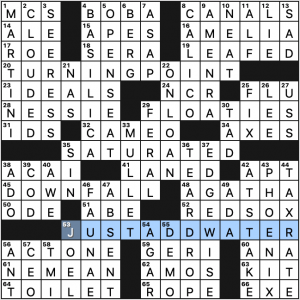 A most enjoyable theme since nothing made sense until the revealer provided the aha moment! And all the clues and answers are solidly in the language.

I enjoyed this for a personal reason as well. Back in 2011, I made an anagram-based puzzle geocache entitled JUST ADD WATER. You have to add the letters H, H, and O to a phrase to get a new phrase that answers the given clue. I’ve toyed with the idea of making a crossword puzzle using this idea, but never got around to it. Want to try out my puzzle? It’s still alive right here. And if you’re ever in San Antonio, you can still go out and find the cache.

Back to the grid. Aside from the nifty theme, the fill is equally lively with interesting 6s, 7s and 8s throughout: MARTINI, BASILICA, OPEN SEAT, CALICO, AMELIA, MULLET, TEARDROP, NESSIE, AGATHA, RED SOX, AT STAKE, PHOENIX, and TAX RATE. That’s quite the collection of fun fill.

Clues felt fresh, but these stood out from the rest:

A very nice puzzle all around. Looking forward to seeing more from this constructor. Four stars. 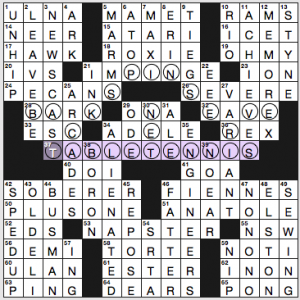 The theme is Ping Pong, and I didn’t care for the puzzle. 37a. [Olympic sport since 1988] clues TABLE TENNIS, but then that answer serves visually as the table itself, but the answer isn’t TABLE TENNIS TABLE, the answer is the sport. It’s gotta be the table, though, because 30d. [Item depicted here] clues NET and it’s sticking up from the middle of TABLETENNIS. Rather uselessly, ATARI is added, 15a. [Its version of 37-Across was popular in the 1970s-’80s]. Then the other name for the game is split at the bottom: 63a. [With 65-Across, another name for 37-Across], PING / PONG. And to make constructing the puzzle more difficult without enhancing the fill, we’ve got BACKSPIN and SERVE bouncing across the table. Except! Reading from left to right, it looks like the SERVE comes after the BACKSPIN, and that just seems backwards. The BACKSPIN doesn’t seem at all backspinny to me, but what do I know? 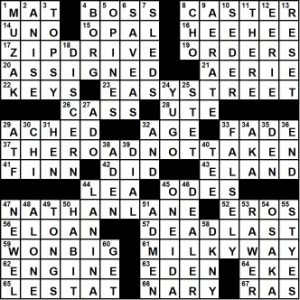 Starred clues have become a regular feature of Universal Crosswords. Here, it seems, they may be necessary because of 8-letter non-theme answers that might cause confusion otherwise. Here, we have a synonym theme with some creative elaboration.

The other two horizontal 8’s are the rather bland ASSIGNED and the kick-butt ILSA DEAD LAST. Nothing longer than 7 in the verticals, those being FALSELY and DISCERN, and they accompany the shorter ILSA’s LA NIÑA, SAVE AS, and AD MEN. 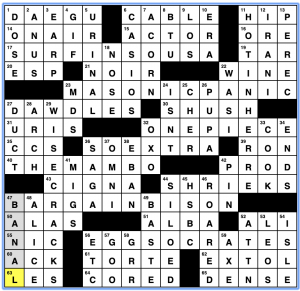 After a few tricky weeks, the AVCX is back to 2.5/5 on the difficulty scale with a puzzle from editor Ben Tausig.  This one’s titled “More is More” and applies recent slang with great effect:

The extra SOs in the theme entries transform SURFIN’ USA, MANIC PANIC, BARGAIN BIN, and EGG CRATES into delightfully extra versions of their former selves.  This was nicely timed for the week of this year’s Met Gala — the “Camp” theme of this year’s Met Gala and the ways the various attendees (and the design houses associated with their outfits) interpreted things are a great way of thinking what “extra” can mean.

Elsewhere in the fill, DAEGU took me forever to crack, probably because I was convinced “Waste space?” was somehow ONUS instead of ANUS.  Similarly, I knew exactly what Ben meant with the clue “Place to stare resolutely at the wall for a minute, typically” and couldn’t get my brain to leap from “the bathroom?” to URINAL.  I was very glad to remember that Georges PEREC wrote Oulipo lit  (like that novel without any Es) without any crossings.

The appearance of Abba EBAN in the puzzle seems as good enough of an excuse as any to remind you that next week is the Eurovision Song Contest, taking place next week in Tel Aviv, Israel, following their win last year.  Here’s my favorite entry from this year’s field of 41 entries, Hatari, who I hope I’ll be able to include in a themeless grid if they win.  I assume the clue will be modified to “1962 Howard Hawks film”. 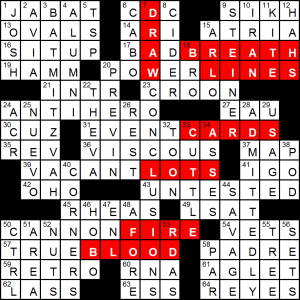