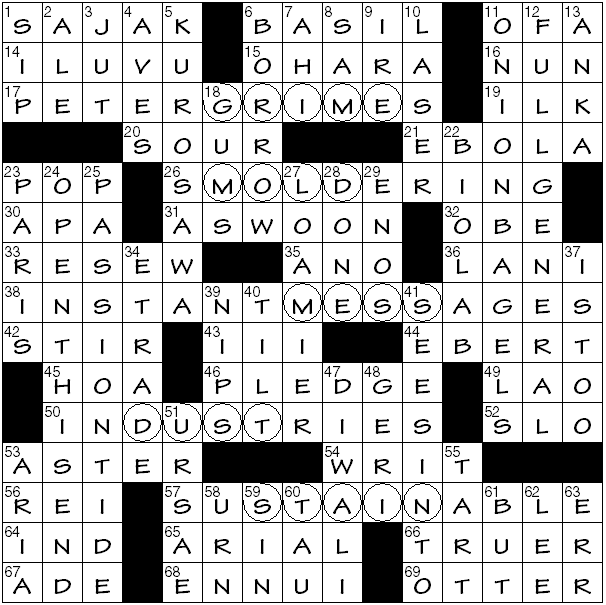 A little birdie told me that this is a debut crossword! Welcome to the land of published constructors, Helen! There’s no sign of first-timer jitters in this smooth grid.

All the theme answers have hidden words, which are easy to spot in the circles. For tonight’s performance, the role of the circles will be played by orange highlights.

GRIME, MOLD, MESS, DUST, MESS, and STAIN are all addressed in the rite of spring cleaning. I’ve never heard of 17a; Wikipedia tells me it premiered in 1945 and had a “landmark” production at the Met in 1967. It is frequently performed at the Royal Opera. I’ll leave it to our opera fans to opine on its obscurity or lack thereof. All the other theme answers are securely in the language, and the opera title was easily inferrable from crossings; even if you didn’t know KUROSAWA, you could guess the name had to be PETER. All in all a strong theme. Question for the group: who actually does a spring cleaning? We do not, aside from cleaning out the cabinets before Pesach.

What I didn’t know before I did this puzzle: that Patricia Saunders co-designed the ARIAL font in 1982. 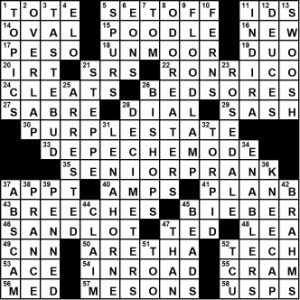 So, I was just sitting around casually solving Andrew’s themeless monster here, finding the upper left to be totes impossible. Finally pulled it all out in 37:06, but who’s keeping time, right?

And then it dawned on me that I had volunteered to review this item. So, with a second hour now starting to pass since it came out, I am scrambling. Bear with me.

This was a very enjoyable puzzle. The highlights for me were these:

Superb work, Andrew and Will! 4.5 stars! 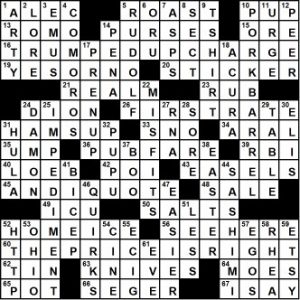 Another synonym theme, I think … with a long reveal. Though, at this moment, I cannot reconcile the title with the theme. Maybe taking a closer look will help:

Will Nediger’s The Chronicle of Higher Education crossword, “A Study in Scarlet”–Judge Vic’s write-up. 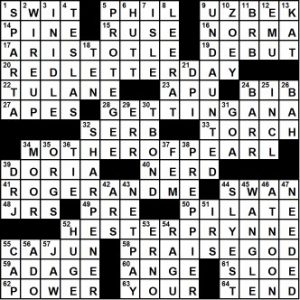 Will Nediger’s The Chronicle of Higher Education crossword, “A Study in Scarlet,” 5-10-19, solution

I like this puzzle, even though its theme is easily guessable quickly. Best way to illustrate this, plus my like for it, is to look at the theme entries: 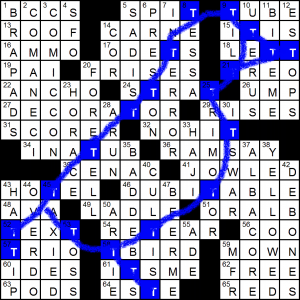 “Dot to dot” Grid art is fairly common, though not in the more “everyman” LA Times crossword. However, today features a TBIRD, a bird shape made out of all of the Ts in the grid. It’s a clever piece of wordplay, but it means one aha for the entire puzzle. I can see this theme being somewhat polarizing.

The execution of this theme seems to have resulted in a lot of annoying short answers (and some medium), particularly ones with T’s in, unsurprisingly. To wit: [Native of Riga], LETT – no indication of it being obsolescent; [Early smartphone], TREO – really short shelflife, bygone technology models; [Bars in court], ESTOPS; [Three-engine plane], TRIMOTOR.

[Confidentially informs], BCCS. No indication of abbreviation – must be Friday! 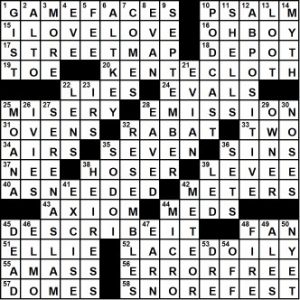 Today’s New Yorker was a comparatively breezy solve for me – just over eleven minutes. Let’s look at the highlights:

1a [Competitive expressions] GAME FACES
15a [Romantic’s credo] I LOVE LOVE
17a [Lost tourist’s aid] STREET MAP
20a [Ghanian fabric that became a Pan-African symbol] KENTE CLOTH
40a [Whenever you require] AS NEEDED
45a [“What does your lost item look like?”] DESCRIBE IT–This one, more than the others, has a green-paint feel, imo.
52a [Crocheter’s frilly creation] LACE DOILY
56a [Devoid of mistakes] ERROR-FREE
58a [Totally boring event] SNOREFEST
12d [Universal plasma donor’s blood type, often] AB POSITIVE
27d [Tennis feat named for a Williams sister] SERENA SLAM