Do people have problems with product names in their puzzles? I don’t really. I feel like they make for great source material as long as the products are universally known across America.

Here we have some deft product placement inside well-known film titles. 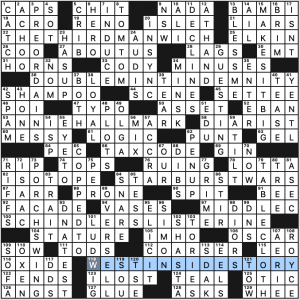 I like these pretty well. My first question is…Why aren’t there question marks in the clues? I realize that parts of the clues still apply to the original film titles, but the clues as whole units are quintessentially wacky as crossword wackiness goes. So it seems to me they ought to have question marks.

And my second question…Is anyone bothered by making light of Schindler’s List? It caused me to recall the Seinfeld episode where Newman catches Jerry and his girlfriend-of-the-week making out during the film. His parents were mortified of course, but Jerry felt he had a valid excuse, and anyway, in the real world, there is no consensus on the quality and importance of the film itself. What say you?

Moving on to the fill, the solve felt smooth overall thanks to solid entries like PORCH SWING, MAKES IT BIG, PRE-ORDAINS, TABLECLOTH, TAX CODE, MIDDLE C, OVERSELL, STATURE, ISOTOPE, MINUSES, DIARIST, BLESS ME, and ABOUT US.

GUESTING [Appearing on someone else’s show] is about the only eyebrow-raising entry I see other than a few short entries like ACRO, EBAN and EYE TO.

Clues felt mostly straightforward but I will note 99d‘s [“Phone book” of the internet, briefly] for DNS. I’m not sure that I’ve ever seen it in a crossword, but it seems fair to me. The Domain Name Service is how popularly known web addresses (google.com, yale.edu, etc.) are mapped to the numerical Internet Protocol (IP) addresses that computers use.

That’s all from me for this week. An enjoyably solid puzzle for your weekend. 3.9 stars. 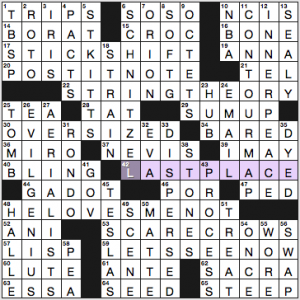 It’s been a long day, I’m tired—and when I loaded the NYT page and saw that the Saturday puzzle was by Robyn, I perked right up. Just as I expected, there’s lots of lively fill, very little detritus, and some entertaining clues.

Musical interlude: 31d. [Repetitive movement in a sonata], RONDO. Okay, so I am familiar with exactly one rondo, and I learned of it from the Baby Mozart video when my son (who just finished his first year of college) was a little tot. It’s Mozart’s Ronda Alla Turca, and you can check out the performance below. 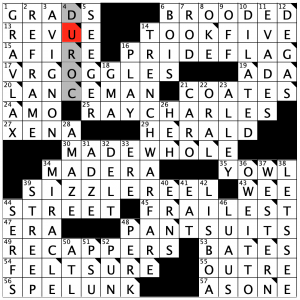 I should have known once I saw Matthew Sewell’s byline it was a bad idea to solve this one Downs Only, but we forged ahead anyway. And we came out the other end bruised and battered. Take a look at that grid image!! I had errors all over the place. Look at these Across entries that you had to figure out: VR GOGGLES, LANCEMAN, MADE WHOLE, SIZZLE REEL, RECAPPERS, and FELT SURE! I did look at some of the clues afterward, and obviously that would have made the puzzle a lot easier, but I wouldn’t have known MADERA regardless, and some of the clues are so vague it may have taken me just as long. This also feels like it was a tad tougher overall than a normal Saturday LAT, but it is hard to know for sure solving Downs Only. These have been taking me 10-15 minutes, I would say, but not this week! 4.5 stars for a highly challenging puzzle.

Some toughies from those Downs: 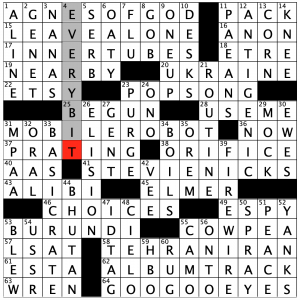 I saw another Longo byline and I was a little intimidated. And for good reason! This one was a toughie. Can I use the excuse again that it has been a long week? Or it’s been rough at work? Or my son was sick? How about all of the above! Seriously, this puzzle certainly fits the bill as a Stumper, since I felt thoroughly Stumped. I spent way too much time solving Saturday crosswords this week! 4.6 stars for another gem from the master.

Whew!! Have a great weekend!

There are a few bugs in this crossword today. 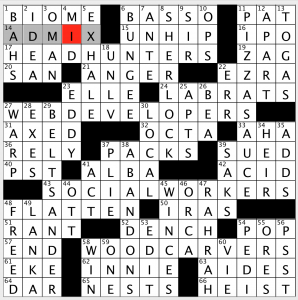 Great theme! I mean, I doubt that termites would do a good job at carving wood to one’s desired specs, but hey… we can’t all be amazing at our chosen career path. Really liked all the theme answers, even the (yucky) lice one.

Nice longer answers with PIZZA SAUCE and BELT SANDER too (which I bet could help those termites).

ADMIX is new to me. I assumed there was something wrong in that corner and I’d have to go revisit it for a correction once finished. But, nope. It’s a thing. Surprised I haven’t encountered that word more often.

If you came for a 51A [Fiery blog post] RANT, then you came to the wrong place. I thought this puzzle was adorable. Great title, too.