Happy Mother’s Day! As you may have guessed by the title, moms are being honored in the WaPo today… in a very veiled way (“veiled” being an appropriate word for the final meta answer).

This is probably the toughest meta I’ve seen in the WaPo, but it’s a worthwhile Aha Moment. 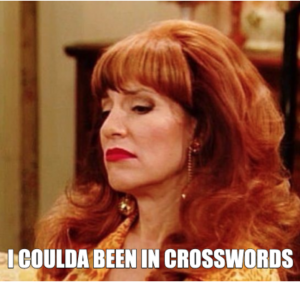 So what’s going on here? If you’re anything like me, you assumed that the first letters of the moms’ names in order would spell out the meta answer. But that yields CACLAJMA, which looks like some sort of foreign disease. I did need to Google search some of the names for the shows I was unfamiliar with (“Good Luck Charlie,” “7th Heaven,” and “Empire”),  and thankfully, the number in each clue (which matches the number of letters in each mom’s first name) gave me confidence that I was at least on the right track. But nothing in those names alone resembled anything even close to a final answer.

I was about to throw in the towel since I was pressed for time, and jokingly write “I dunno. This meta is making my head hurt… which sounds like something Morticia Addams would appreciate.” But as I went to screenshot the grid, the answer ANGOLA seemed to leap from the screen. Looks awfully similar to ANGELA. And hey… CAROM… you’re a funky lookin’ word… and I see you sitting over there, trying to pretend you’re not CAROL Brady! Sure enough, each of the moms is in the grid, but with one letter changed. 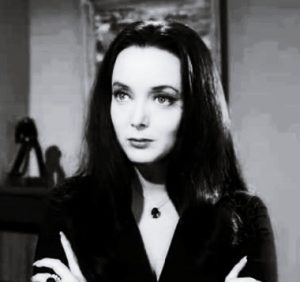 And voila. Indeed, the final answer is MORTICIA!

Not only was the multi-step meta truly fun to uncover, but the puzzle itself was entertaining and fresh. Some great clues included:

All in all, loved this one! Great construction and concept. Title is awesome too. Your thoughts?

And of course, Happy Mother’s Day once again. 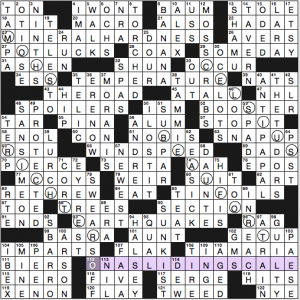 Neat science-oriented theme. The revealer, ON A SLIDING SCALE, is a play on various measurement scales “sliding” by running down diagonally through the word or phrase that the scale measures. MINERAL HARDNESS has the MOHS scale. TEMPERATURE has, among other things, CELSIUS. WINDSPEED has the BEAUFORT scale. And the intensity of EARTHQUAKES is measured via the RICHTER scale.
Did not know: 35d. [Tending toward an outcome], TELIC, and 19d. [Moon of Saturn named after a Greek Oceanid], TELESTO. Also never heard of MOSS CRABS.

Dislikes: HAD AT, plural TINFOILS, RETHREW, TAMMIE, EYEREST, and the crosswordese zone that includes ESS ENOL NOBIS EPOS. There were a few cute clues in the mix, but overall, I wasn’t loving the fill. 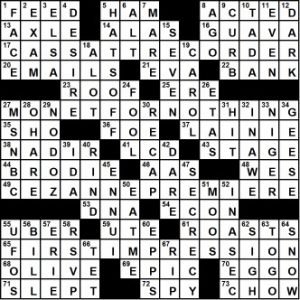 With a title like “Picture-Perfect Puns,” what could Andrea and Robert, whom I judge to be a newbie for whom this may be a debut, be up to? Let’s examine the evidence to solve this mystery:

17a [Female French artist’s scribe?] CASSATT RECORDER—Mary Stevenson Cassatt was unknown to me. Looks like she was born in Pennsylvania in 1844 and didn’t get to France until 1865. Her last name has been in 15 puzzles, according to Ginsberg, and the clues identify her as American. Her name does generate a nice pun, as cassette recorder is undeniably an in-the-language stand-alone term.
27a [Result of a gallery fire sale?] MONET FOR NOTHING—Money for Nothing is the title of a 1928 P.G. Wodehouse novel and of a handful of films, songs, and TV shows or episodes. I believe I heard my father say it a lot when I was a kid. He was against it (“Why, that’s like getting money for nothing!”)
49a [Episode One of a painting show?] CEZANNE PREMIERE—Season premiere. That’s a phrase I’ve heard all my life.
65a [Job interview concern, or a hint to this puzzle’s theme] FIRST IMPRESSION–I assume the reveal is telling us that each of the artists was an impressionist. I saw that about Cassatt when looking her up. I think I knew that about Monet and Cezanne. That certainly adds an element of tightness to the theme.

The punny-artists’-names theme is one that comes around. Pretty regularly. Like zodiac themes and Greek letter themes. It was done nicely by Tracy Bennett in a Sunday New York Times puzzle (“Artful Thinking”) in July 2013. Nothing in today’s theme dupes any of Tracy’s entries, and only one artist’s name is repeated (Tracy used ‘TIS THE CEZANNE ).

With 60 theme squares in play, all horizontal, it’s not surprising to find that, after the four 15-letter themers, the longest Across answer is six letters. Among the Downward answers, we find two 7’s: HATS OFF and SECRECY. Nothing wrong with those.

Congratulations, Robert, and welcome to the world of cruciverbalism!

Looks like a debut for Mr. Levin! Congrats and welcome. 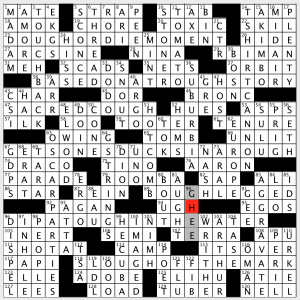 Sure, the original base phrases don’t all share the same sound (“do” and “cow” and “slow” for example). The same is true of the word when it’s altered (“bough” and “rough” and “dough”). So the theme lends itself to an inconsistency, but ironically enough the inconsistency is consistent. Lots of fun phrases and cluing here.

The only one that was a real head-scratcher for me was SLOUGH OFF THE MARK. I’ve never heard “slow off the mark” before (I’ve just heard “off the mark”), though I’m probably in the minority there, and I wanted SHED instead of SLOUGH, though obviously that wouldn’t fit the theme at all.

Not entirely sure I understand the BOUGH reference with respect “clunk.” I only know of a BOUGH as a tree branch.

Those -OUGH endings in every theme answer provided for some aid in the fill too.

Apparently plebeians like myself who cannot afford premium seats to concerts and shows are bitter, so we HISS and throw TOMATOES. If I don’t like it, I just walk out (looking at you “Gary: A Sequel to Titus Andronicus” currently on Broadway).

It’s been a busy Mother’s Day, so this is late and thus brief:

Each theme answer contains the word LAD. It’s a group of youths. 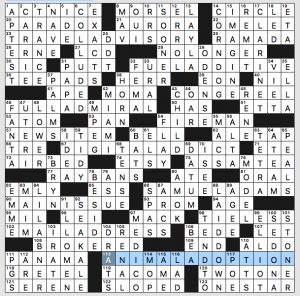 The theme also “groups” the two words of each answer. Nice and tight.

What I didn’t know before I did this puzzle: that CARRIE was Stephen King’s first published novel.