This is a nice Monday theme. I guessed what it would be with the first answer and was completely wrong. 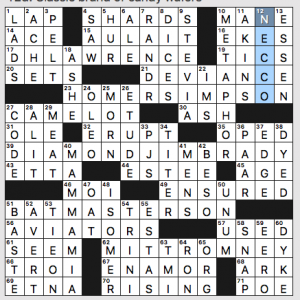 DH, HOMER, BAT and MITT are all baseball terms, and the revealer at 39a is [Early railroad tycoon whose nickname is a hint to the starts of 17-, 23-, 51- and 62-Across] tells us why – DIAMOND JIM BRADY. Nice accessible Monday theme with a fun payoff for experienced solvers. Thanks, Gary and Will!

What I didn’t know before I did this puzzle: that Claude AKINS appeared on “Gunsmoke” (I looked him up).

Ladies and gentlemen, Dick van DYKE (and yes, that’s his wife, who is 45 years younger than he is). 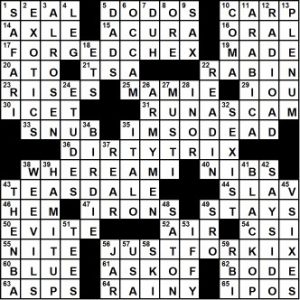 “Cerealization” is a good title, though one could argue for “Cerealism.” Which, with its nine letters, could have been a fourth theme entry and, as such, would have been a clever reveal-title. Sam would have had to come up with new theme clues, though, as cereal is in all of them.

There is no reveal. Nothing wrong with that, but a lot of recent puzzles have had reveals that did little more than add to the overall theme content and/or add a chuckle to the presentation. This puzzle is unusual in that the total theme letter count is 29 boxes, comprising three theme entries.

That said, here we have three cereals that end in the letter X, said X being such that if replaced by CKS, the word and, therefore, the phrase of which it is a part, would be something altogether different from cereal. I feel safe in saying that these are the only three cereals on the market that meet this criteria.

So, there you have it. Don’t get me wrong, it is clever. I’m surprised, though, that Sam didn’t go for three longer answers. I can think of a few off the top of my head. Background/cashiers Chex, conjuring/magicians Trix, butterfly/roundhouse Kix. Well, maybe there’s not a good grouping beyond what was used here.

With the diminished volume of themers (10-9-10), we expect a ton of non-theme sparkle. And we are not disappointed: 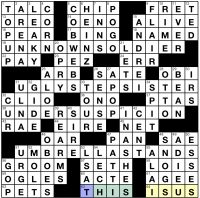 19A: UNKNOWN SOLDIER [Anonymous Arlington honoree]
31A: UGLY STEPSISTER [Evil Cinderella sibling]
38A: UNDER SUSPICION [Possibly the perp]
51A: UMBRELLA STANDS [Entryway conveniences for rain deflectors]
63A: THIS / IS US [With 64-Across, NBC drama … or, in four parts, a hint to the answers to starred clues]

I don’t mind this at all. A fun take on a modern, super popular piece of pop culture whose themers take up a fair amount of grid real estate? Works for me. I could do without UGLY STEPSISTER as a commentary on women, their looks, their roles, etc., but that is how the characters were described, I reckon.

I enjoyed seeing so many women in the grid (CLIO RAE LOIS PATTI) but wasn’t as excited for some of the random ye olde male names in the grid, including 1975 Nobel Peace Prize winner ANDREI Sakharov and 1947 Nobelist in Literature Andre GIDE, especially since the latter is a self-professed pedophile! Now, that’s ugly.

OUTERMOST is the revealer at 64a clued as [Farthest from the center, and a hint to 17-, 24-, 40- and 51-Across]. Each of those entries has the word MOST split between the beginnings and the ends of their respective entries. 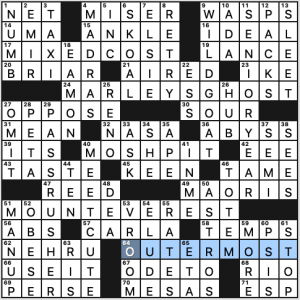 It’s hard to get excited about a theme that’s simply about splitting up the word MOST, especially when one of the answers is one you’ve never heard before, but honestly, I didn’t look at the theme too closely while I was solving. And it seems like a perfectly fair theme for a Monday.

I enjoyed the fill more, especially PASS RUSHER, SENIOR YEAR, and WILD GOAT. I think I may have heard MEET CUTE [Feature of many a rom-com] before, but I can’t be sure. Anyway, it’s defined as “an amusing or charming first encounter between two characters that leads to the development of a romantic relationship between them.” Yeah. I’m skeptical that we’re all better off for having learned that. 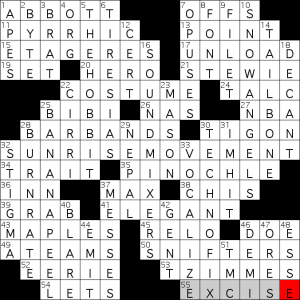 joon here with the review of natan last‘s new yorker puzzle. like many of natan’s puzzles, i found this to be a difficult but richly rewarding solve. i did my usual downs-only solving, and i was quick off the mark in the upper-right, where OPUSES, FONT, FILET, SNOW ANGELS, TAILBONE, and DECANT all fell more or less right away. the clue {Their wings melt in the sun} for SNOW ANGELS is a terrific one, but one i’ve seen before, so i was not misled into thinking about icarus. however, a good working knowledge of greek mythology did help me plunk down {Figure who Hera turned into a woman for hitting copulating snakes with a stick} TIRESIAS, which helped quite a lot in the middle-left section along with THE HOBBIT, CIRRI, and BANANA PEEL.

this is where my progress came to more or less a screeching halt, though. i tried I’M HIT for {Paintball player’s cry}, which was correct, but i didn’t like _____HLE for 35a, because what ends with those letters? (PINOCHLE, that’s what, as you already know.) the long answer at 32a looked like it wanted to be SUNRISE something, but i didn’t know what the second word could be even with ____MENT, as there are quite a lot of nouns that end that way. and i was pretty sure {“Solution” often derided for ignoring politics} ended with FIX based on how it fit with other entries down in the bottom-right corner, but the first six letters were unknown to me. for about 10 minutes i had BERNIE FIX in there, a term i may have made up but that seemed like it might be a thing. that made 30a BIGON, which is definitely a thing (a two-sided polygon, which can’t exist in euclidean geometry but certainly does on e.g. the surface of a sphere), but one i wasn’t sure would be in a crossword. still, i had nothing better (the actual answer {Big-cat hybrid} TIGON did not occur to me even when i had _IGON), and i thought it just barely possible that BIGON might be right but clued as the phrase BIG ON, as in something like {Showing great enthusiasm for}.

it took a while to sort this all out. the next part i got was the lower left. based on the hypothesized SUNRISE, i thought {Traditional birthplace of Buddhism} might be DELHI because i couldn’t think of anywhere else in india that had that E in place, and i knew gautama siddartha was from ancient india. (so close! he was, but from a part of the subcontinent that is modern-day NEPAL.) still, _ARBAD__ gave me the incorrect BARBADOS 28a, which was enough to suggest the correct {How quickly a business goes through cash} BURN RATE for 28d, after which the whole corner clicked into place.

after that, i tried several things at 12d {Legal writ, in brief} like NOLO (not a writ) and even HABE (not how anybody refers to habeas corpus) before stumbling on CERT, which seemed like it fit well. that was enough to unlock the upper-left corner, but i still had to figure out 16d {Devices that help make a track suit} from S___O_____S. i did (correctly) think the clue was likely playing on “track suit”, using track as a noun and suit as a verb, but i still didn’t know what kind of track we were talking about. but with the S in place and COSTUME looking likely at 22a, i tried SOUND even though it required me to take out BARBADOS and replace it with BARBA_DS; i’m not even sure why i kept the S but it did give me the correct MASON at 23d for {Elizabeth Aldworth was the first recorded female one}. so that’s a wrong across answer with enough right letters for me to get two important crossing downs. this is a very good kind of wrong answer if you’re solving downs-only! once i saw SOUND MIXERS, the rest of the puzzle was more or less straightforward.

but enough about me (he said, after four lengthy paragraphs about himself). how was the puzzle? i thought it was, as usual, excellent. i wasn’t familiar with marquee answers {Organization uniting young people against the climate crisis} SUNRISE MOVEMENT or TECHNOFIX, but the concepts they denote are certainly familiar enough. (on the subject of the latter, check out the directions to the game elon musk’s ipod submarine for a hearty chortle.) i always come away from solving one of natan’s puzzles feeling a little more informed and a little more woke, and today was no exception. in addition, there’s nothing clunky in the grid; it’s an ELEGANT construction, {Like some mathematical proofs}. this is one of my favorite themeless puzzles in recent memory, so thanks to natan and the whole new yorker team for a highly enjoyable solve.

Grumble, grumble. I hate it when I have a DNF. But alas, the Stumper and BEQ sometimes put me in my place. Worst part is, I shoulda had the GRIT to suss it out. Can’t really say I was Naticked.

I wish I had more fun with this than I did. It’s not the puzzle’s fault. I was distracted and am coming down with my bi-annual sick bug.