Title: “Dropouts”
Prompt: The meta for this puzzle is a hit from the ’80s.
Answer: “Missing You” by John Waite 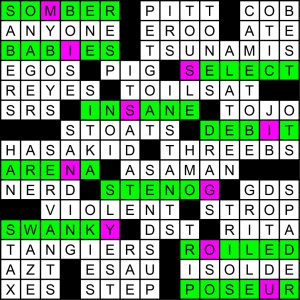 Somehow I missed that there was a tougher version of this available, which turned out not to have the asterisks on 10 clues as the easier version did. Those were:

What’s the key? One letter from each of those entries can “drop out” of there and still leave a valid answer to the given clue: SOBER, BABES, ELECT, DEBT, AREA, STENO, SWANK, RILED, and POSER. Those dropped out letters spell the apt MISSING YOU, the line “I ain’t missing you at all” being especially appropriate as something the rest of these entries could say to the dropout letters.

With one letter difference only it was inevitable that most of the pairs would be etymologically related, so that lessened the surprise factor a bit. But note how much craftsmanship was required to fit all the entries symmetrically into the grid and have them spell out the fitting reveal. Not easy.

Not sure whether Pete noticed this but at 58-A he was wise (or lucky) to clue TANGIERS to the casino [“Casino” casino named after a Moroccan city] since if he’d clued it to the city then there’d be an unwanted extra theme entry, since the city is known as both Tangier and Tangiers in English.

I did not know but was intrigued to discover 25d., [Largest U.S. city, in terms of land mass] = SITKA, Alaska.

Fun one, let’s say 4.44 stars. I’ll go ahead and boast that I’m 5-for-5 though I’ve been punished severely after doing that in past years so maybe I’d better not…but I do expect the difficulty level to ratchet up severely in coming months! It always does.