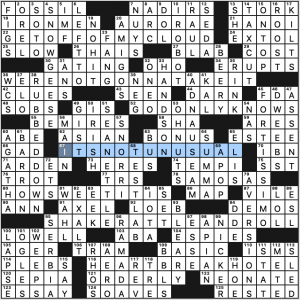 I like this theme; it’s not big on wordplay, but it has good potential for humor, and humor, to me, means entertainment. Not all of these worked equally well, but enough of them did. It could’ve used at least one modern song for the youngsters though.

Did not know GATING [Boarding school detention] at all. Apparently it means to confine a student to school.

Fun theme (unless you’re one of those Young-Americans and don’t know these old songs), some strong fill, but some detracting fill as well. Let’s put it right at 3.5 stars. 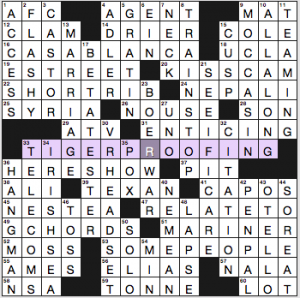 Aaah! The dynamic duo returns, with a Saturday puzzle that is either clued more like a Friday puzzle or just on my wavelength.

On the (mildly) scowly side:

TOtally TOre this one up!

This puzzle feels dated in both its theme concept and some of its actual entries. TOUCH TONE phones? Is that an “option” any more? Even ZOOT SUIT with its fun letters has some dust on it. Conde NAST, NOLAN Ryan (That’s NOLA with an N), Al HIRT, and Alison LURIE add to the age of the grid.

And is TATA a bonus theme answer? In a puzzle with this basic a concept, I’d be careful to avoid fill that follows a T (VOWEL) T (SAME VOWEL) pattern.

I do appreciate the vowel progression of the five theme answers, but I found this one rather bland overall. UBER X and I’M AN IDIOT gave it some life. 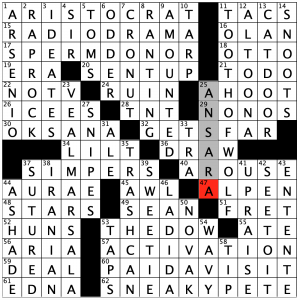 I tried at first to do the Downs Only, but this one was a bit too tough. The solve time is a tad quick since I DID start a Downs Only, but in the interests of time, I had to go with a standard solve. Some of the across answers I don’t think I ever would have gotten. Andy Kravis has been solving the LAT puzzles Downs Only on Twitch, and I do the same 7 puzzles weekly in a Downs Only fashion, so I am curious to see how he handles some of the across answers that I struggled with, some of which I will mention below. Great puzzle, though! I did thoroughly enjoy this one. 4.6 stars.

Have a great Saturday! 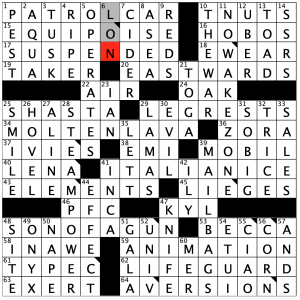 Totally Stumped this week. Battered and bruised! I don’t know how these kids solve these extremely tough puzzles with just the Downs. Tons of good stuff in this one, and I am a big fan of Greg Johnson puzzles. I may start on next week’s Stumper super early. When is that day off that is coming?? 4.7 stars for this gem.

It is supposed to be a beautiful day here in northern Indiana. Have a great weekend!