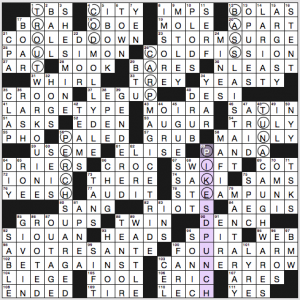 Neat theme from Natan. Seven familiar phrases or compounds that happen to contain a letter string that’s also a type of fish have those fish “hooked” and pulled “up” to the top of the entry. From left to right, we have:

Happy Sunday! I’m going to try to describe this theme without being too wordy. Wish me luck.

THEME: Half of the themers contain two hidden words, both of which are aptly described by the other half of the themers that follow “A AND B” formula. Anyone want to take a crack at describing that more clearly and succinctly?

This is one of those themes that I appreciate in retrospect since understanding it wasn’t necessary in order to solve the puzzle. Essentially, I solved this like a themeless. While I did notice the _____ AND _____ pattern to half of the themers, I never bothered to stop and search for the cross-referenced clue since they were clued independently from the theme. Also, I really hate stopping to search for a cross-referenced clue unless it’s necessary, so I didn’t.

When the puzzle was over and I grokked the theme, I said “Ah, I get it. Nice.” And that was it. Evan seems to cycle through puzzle types (Basic, Clever, Insanely Clever, Themeless, Meta, and Un-Crossword Puzzles [“Something Different” or a Variety Puzzle]). I’m sure this isn’t a strict rule of his, but I feel like that’s a fair assessment of WaPo after reviewing them for this long. I’m bringing this up only because I think this is a very strong cycle and a great way to reach all different levels of puzzlers. Veteran solvers may shrug at today’s theme, but someone out there just got hooked because they were able to solve the puzzle and had a great Aha Moment.

I look forward to seeing what’s next in the cycle! Something tells me the heat will be a touch higher next week. 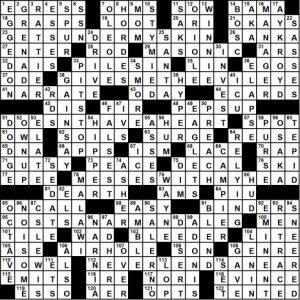 I like this kind of theme. And I like this specific puzzle. It was fun. Mark gives us punny quotations from a series of angry patients, the pun in each instance being, shall we say, directly proportionate to the specialty of the doc involved. First, the themers:

So, with a theme like this, it’s important that the theme answers be horizontal. With a theme count of  15-17-16-16-17-15 (96 letters), we’d not expect too much else in the Across domain. But there is actually some pretty decent and fun stuff to behold there:

And in the Down arena we find:

All rise… no, wait… sit back down, for a breezy puzzle by Ms. Burnikel on this lovely Sunday.

THEME: Things one can sit on make up the second word of two-word phrases. 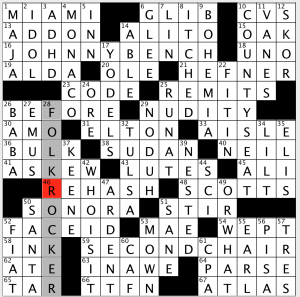 Initially entered FOLK SINGER for James Taylor, but one would have difficulty sitting on a brand of sewing machine without risking strange injuries.

Basic theme type here that is consistently presented, though SECOND CHAIR still refers to an actual CHAIR more-or-less. At least it’s more closely related than the others, particularly BENCH and ROCKER, which do not conjure images of the actual thing one sits on at all in those contexts.

TTFN is new fill for me… I assume “Tata for now!” Do Brits use that shorthand in place of TTYL? Other fill is mostly standard, though I liked FACE I.D.

I love Ross Trudeau’s puzzles, and this is a good one. Each theme answer has “el” removed. Wackiness results. 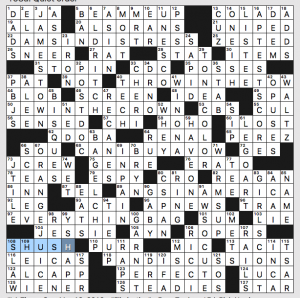 They all work brilliantly, and each base phrase is solidly in the language. I really enjoyed solving this.

What I didn’t know before I did this puzzle: that COLADA means “strained.”