Anyhoo, that leaves me with the task of deciphering Will Nediger’s Fireball contest offering. We’re supposed to find a cartoon character hinted at by this super-sized 19×17 grid. The theme answers seem obvious, but I’ve been wrong about this kind of thing before. We have a raft of 9-letter answers. 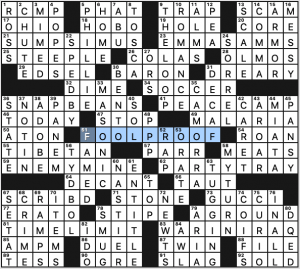 So what do you notice about these entries? I think it was EMMA SAMMS that did it for me (that pair of double-Ms was a giveaway). Each of these is a near-palindrome. Aside from the lone central letters in each 9-letter answer, the other letters pair off (going outward from the center) except for one pair of letters. In EMMA SAMS, it’s the initial E and final S.

What do we do with this information? We make a list! Since we don’t know which letters are the important ones at this point, let’s write down both letters from each answer that ruin the palindrome. For a visual reference, I’ve marked the central letters in red.

And just like that, we see PEPE LE PEW emerging from the first set of letters. Easy peasy! And not only is PEPE LE PEW the answer (or the one I would submit if I was going to submit), it could be another theme entry in this puzzle since it’s one letter off from being a palindromic name.

What do you think? I felt the solution to the meta was far easier to find than I expected, and far easier than solving the grid itself. From a blogger’s standpoint, I’m grateful I didn’t have to flail around all weekend trying to suss it out.

My question is how did Will find these? My initial guess is to go the online tool Qat and put in this search string: “ABCDEFCBA;|A|=1;|B|=1;|C|=1;|D|=1;|E|=1;|F|=1”. This finds all nine-letter words in its database that are nearly palindromic except for the fourth and sixth letters (in this particular search). This results in 16 hits including FOOLPROOF, SUMPSIMUS, and TIME LIMIT (but not SNAP BEANS). But their database doesn’t have movie titles or proper names or a phrase like WAR IN IRAQ, so Will must have taken this approach with another database, presumably his own word list. Anyway, I think it’s very cool that he worked all this out and was able to spell out another potential entry PEPE LE PEW using the changed letters. Very impressive!

The only thing I’m still thrown off by is the title, “Semi’d’omes”. I see that it’s yet another potential theme answer, but I’m not getting why the d is in single quotes or how the term makes for an aptly overarching title at all. Something to do with “half” maybe? 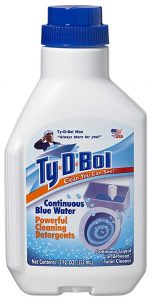 Putting that aside, let’s look at the grid. How many people had trouble in that TY·D·BOL/SCRIBD section, especially since the clue for TY·D·BOL [Brand found in tanks] has some ambiguity? Tough stuff, but ultimately fair IMO.

I loved seeing Chicago’s THE LOOP and Philadelphia’s PHILLIE Phanatic. “MY TURN” [Eager cry during a game] is fun as well. CAMORRA [Mafia-like organization of 19th-century Naples] was new to me, but all the crossings are fair and gettable.

And that should do it! A very intricate and impressive theme to this contest puzzle, and I loved it. Solid supporting material and fresh clues. 4.5 stars.