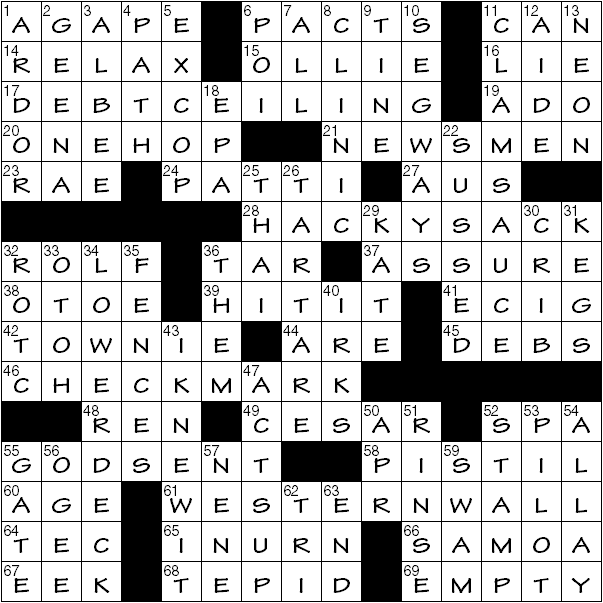 This is a classic Monday theme. The second word in each two-word theme answer goes with a certain other word, and there’s a revealer. The design is interesting – the themers go both across and down.

And the revealer: 39a [“Start the music!” … or what one could do to the finish of the answer to each starred clue] is HIT IT. Hit the sauce, hit the ceiling, hit the sack, hit the deck, hit the mark, hit the wall. All the theme entries are solid and so are the hit the… phrases. Well done.

What I didn’t know before I did this puzzle: that anyone thought INURN was a word.

I leave you with this in reference to 61a

I’m moving this week, so my husband and I are busy packing and getting rid of as much stuff as we can, so this will have to be a brief review. Hope you’re all doing well! 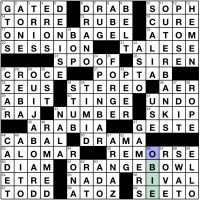 Strong early week puzzle. Lots of themers + revealer taking up a fair amount of grid space, and all the themers are firmly in the language. The revealer even crosses the last themer, which is a nice constructing touch! Otherwise, this grid was pretty straight forward – a bit dated in its fill and cluing (maybe aside from RAJ), but otherwise fine. A few women were included (TRIS DENISE REBA NALA RONA) which was a plus, but I wasn’t politically so excited to see SCALIA, Gorsuch, and ALITO in the same grid. 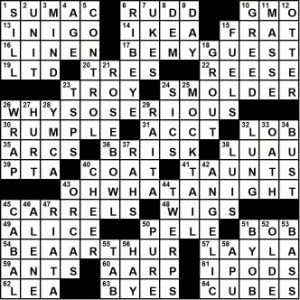 At the party, there’s be no alcohol provided, but that doesn’t mean we don’t want you to drink; therefore, BE WHY OH BEA, okay?

I like it. I am always looking for phrases, sayings, etc. to which this gimmick can be applied. Wish I’d thought of it!

Not much else in the Acrosses. The Downs feature 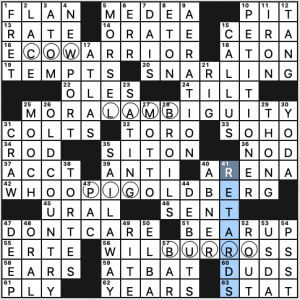 The theme is fine. Maybe even cute.

Haven’t we been through this with chink, gook, spic, and most recently, beaner, after which Will Shortz had to make a public apology? Just because a word has a valid other meaning (in this case [Slows down]), doesn’t mean it can’t cause offense in a puzzle. You don’t see anyone using the clue [Cigarette] for a certain three-letter F-word, do you? No. Because it’s an offensive word to many people. The R-word is too, and an editor should know that. 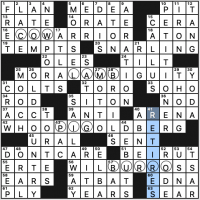 When a word is in a grid it loses some of its context. This is very different than when the same word is used in a sentence. In an image of the grid, as shown above, it stands by itself without the support of its clue, and anyone offended by that word will be shocked that it’s been included in one of the nation’s leading newspapers.

The thing is, it’s not terribly hard to repair. Here’s the work of about 5 minutes: The R-word becomes RETIRES which now crosses BEIRUT with RODE, USNA, TSAR, EDNA, and SEAR filling out that corner (see picture).

Pair this with the recent dearth of women constructors appearing at the WSJ, and it is just not a good look.

A funky looking 15×16 themeless grid with left/right symmetry today. One of those moments when you open a puzzle and can’t wait to see what’s in store. Certainly a lot to like here.

One var. in a themeless sorta makes me cringe, so two is quite off-putting.

Still, that was not enough to distract me from really enjoying this solve overall. DIEGO MARADONA was entirely new for me, but with an inferable first name and fairly crossed surname, it doesn’t warrant any gripes.

MUSIC CLUE OF THE WEEK: 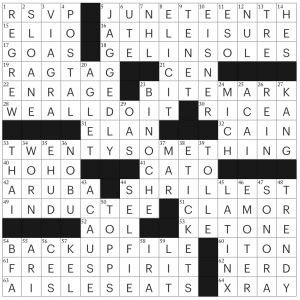 New Yorker Monday puzzles are supposed to be tricky, but today’s installment played more like their weekend puzzle for how quickly I sliced through its grid.  Speedy solving aside, I found a LOT to like in this grid:

How did this one solve for you?