The last time Thomas van Geel was published in the WSJ he delivered a solidly funny grid. And after my last outing as blogger for the WSJ (two days ago), I could use a good laugh. Let’s see if Thomas can help me out.

Similar to his first puzzle, this one has a secret message—which isn’t that much of a secret since it tells you at 18a [With 54-Across, how to read this puzzle’s secret message]. Those answers are TOP TO BOTTOM / LEFT TO RIGHT. 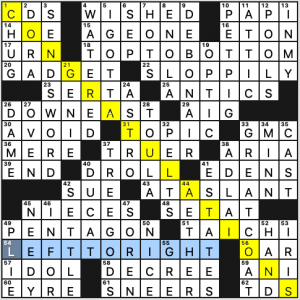 Well, the natural place to start looking is square one, and right there on the diagonal to the bottom right is our answer: CONGRATULATIONS!

This may not have been as funny, but it’s cute, clever, and still delivered a chuckle-worthy aha moment.

The DOWN EAST hint didn’t do much for me, but AT A SLANT makes sense. I wonder if it may have been possible to work in DIAGONAL instead of DOWN EAST.

Some compromises are to be expected in the fill when you have triple-checked letters, but it’s impressive how few there are. The toughest one for me was 28d TOULA [Bride in “My Big Fat Greek Wedding”], but all the crossings checked out. SET AT and ADLAI are un-fun old standbys, but at least they’re easy enough to plunk down quickly.

How I learned the meaning of DEBONAIR: My high school biology teacher had this poster up in his classroom.

I like I GOTTA [“You must let me!”] although it feels like it might be missing a “just” in there. A GREAT COAT is oh so DEBONAIR, and TREE GODS, PENTAGON, and GADGET are all nice. PET PIG feels almost a little green painty, but it’s a fun image. And I’m happy to see the properly plural ANTICS which always looks odd in the singular. 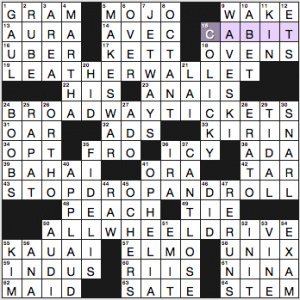 The theme repurposes the familiar lines of a rhyme as crossword clues:

Significant critiques of two of the four themers = bzzzzt.

Fave fill: MOJO, COLICKY, CAN’T-LOSE, CAB IT (which is a phrase I absolutely use).

Worst clue: 62a. [Hyatt hiree], MAID. Sexist much? Don’t blame Hyatt. (Not blaming the constructor, who may or may not have written this alliterative clue. The editorial team should know better by 20-frickin’-19.) Hyatt advertises a job opening for a Housekeeping Houseperson. You know—a housekeeper, a room attendant. This is the sort of language hotels use for the position. Can we not pretend that MAID is a contemporary job title and that, since it’s a gendered word, this is a job specifically for women? Have some Minute Maid juice and leave me alone.

Worst entry: 25d. [Knock on, as a door], RAP AT. Really wish constructors would purge their lists of this slew of ___ AT phrases that feel awkward as hell and have been proliferating in recent years.

2.75 stars from me. The theme needed to work a lot better than it did. 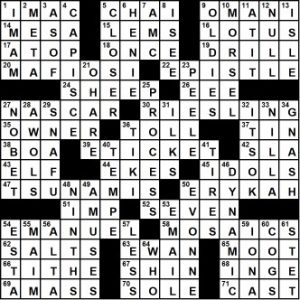 Look closely at the title, folks. The capital K signals something. As does the entire phrase. What Andrew is doing is both hiding and breaking up Stephen King novel titles:

Clever and creative. I finished in near-record time, and it took 10 more seconds to spot the theme. I can’t think how to make the theme identification a little tougher, though.

The balance of the fill was adequate, but not sparkly. I suppose involving 10 Across words in the theme will do that to a gird. The longest word in the puzzle has eight letters. There are very few ILSA’s. E-TICKET qualifies. As do NO BET, AS OF, I SEE, AT IT, and IT’S OK.

Nothing wrong with MAFIOSI, EPISTLE, EMANUEL, and MOSIACS. But … they’re just kind of there. With ILKS, AWOLS, COGS, ALTA, and ESTA.

4d [“Understand?”] CAPISCE bugged me, spellwise. And now I see in the database that it’s been used before. In NYT and Newsday.  And, while I’d have thought this spelling a variant, apparently this is the real Italian word for capeesh. 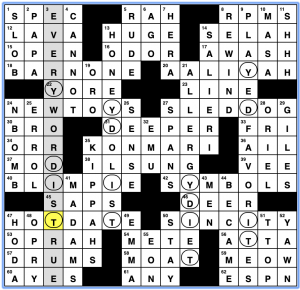 Today’s AVCX puzzle is a collaboration between Jesse Lansner (who I know from crossword tournaments and crossword Twitter) and Laura Braunstein (who’s part of the regular AVCX rotation, but who I also know from tournaments, crossword Twitter, and a regular bet we have involving food and LearnedLeague).  I’ll do my best to be objective in reviewing today’s puzzle, but this one was cute!

Let’s start out by looking at the theme entries, which are vertical in this week’s 2/5 difficulty grid:

As 35A reveals, this week’s puzzle is all about the “‘Life-changing’ decluttering method whose purpose can be seen in this puzzle’s circled letters”.  For those of you that haven’t been in a bookstore featuring a stack of guides to this, seen the Netflix series, or missed countless internet hot takes about it, that’d be Marie Kondo’s KON-MARI method of tidying up.  Accordingly, each of the theme entries features the word TIDY…going up.  I figured that out pretty early on in my solve, making it easy to shred through the rest of the grid.

Graham Patrick Martin portrays ORR in the current miniseries adaptation of “Catch-22” on Hulu. Has anyone checked this out?

The theme in this was straightforward and fun, and cluing helped elevate some of the more frequently-seen fill.  Nice job, Jessie and Laura! 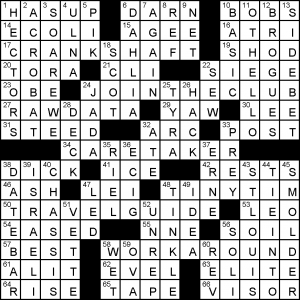 It’s a pretty standard, no-frills puzzle theme today: WORKAROUND is parsed as synonyms for WORK bookend four other entries. On the plus side, it’s a solid set of synonyms: CRAFT, JOB, CAREER and TRADE. The entries themselves were a little dry, apart from JOINTHECLUB; the other three being CRANKSHAFT, CARETAKER and TRAVELGUIDE.

[Receives at one’s roof garden], HASUP is a really goofy way to open a puzzle. Who has roof gardens??