ARTY (63a, [Pretentious, or phonetically the two letters that get separated in this puzzle’s theme]) serves as the revealer today. Theme answers are normal words or phrases that have been split (or re-split) between the R and the T. 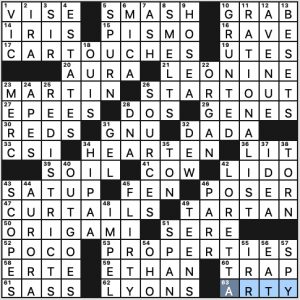 I have a few problems with this. First of all, “artsy” (with or without “fartsy”) seems like the more appropriate answer to 63a‘s clue. Maybe I’m wrong, but that’s my experience. Second, there really should be some explanation as to why R and T should be separated. Simply identifying two letters and saying they’ve been separated is less elegant than having some purported, though admittedly manufactured, reason for doing so. Lastly, and relatedly, the given title doesn’t do that; “alternate” does not imply separation and furthermore, I more commonly see “route” abbreviated as “rte”. I bet I would feel differently if some of these were laugh-out-loud funny, but they didn’t quite get there for me.

Wordplay in a theme is always a good thing, but I felt this one needed a little more polishing. Three stars.

This is not my favorite kind of puzzle. I guess it’s a constructing challenge, and we’re supposed to be impressed by the skill needed to create it. I deeply admire creative constructors and I appreciate them. An inventive, boundary-pushing puzzle that’s fun to solve is a thing of beauty – last Sunday’s NYT comes to mind. This one was a slog to solve. It took me a while to figure out the theme and when I did, it was a “so what?” moment rather than an “aha!” moment. The constraints of the theme made for some icky fill. Just not my cup of tea. 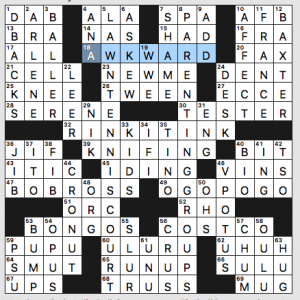 What I didn’t know before I did this puzzle: that COSTCO sells four times as many  prepared hot dogs as every major-league stadium combined. I had also never heard of ULURU or OGOPOGO. 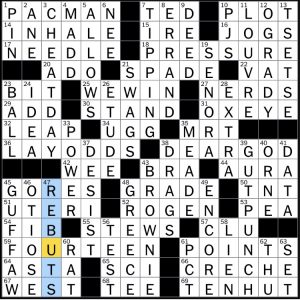 This was a relatively straightforward NYT Thursday for me, and it was easy to figure out what was going on long before I hit the revealer:

That’s a lot of theme clues!  It all makes sense with the revealer:

This is fine, but the density of the theme fill (and the theme’s requirement of it being so dense) sort of leaves the rest of this grid over-constrained.  Once you had a few of theme entries it was very easy for the rest to fall.

Bizarre experience to see 1-Across clued [Not together] with the title “Out of Sync” directly above the clue (solving in Across Lite, that is). Ha!

THEME: Theme answers have the consecutive letters IM (way) ahead of U. 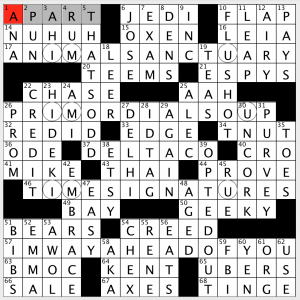 Plenty to like here with lively theme answers and a 76-word grid that still breathes. PRIMORDIAL SOUP was the most fun to uncover, even though it was unfamiliar to me. It’s one of those phrases that just sounds cool.

I had the most trouble with FLU SHOT. For some reason, I wanted it to be FLUSH IT or something. When I finally got it correct, I wondered aloud what a FLUSHOT was. Derp.

Not sure how I feel about NUH UH in the grid. Have we agreed on the spelling? And I’ll never warm up to BMOC, even though I’ve accepted it.

Everything else was very enjoyable. 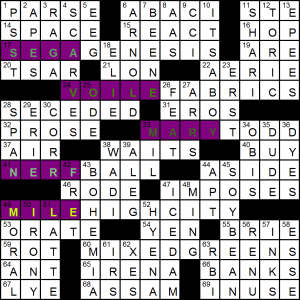 Slightly subtle hidden word theme today. The revealer is MIXEDGREENS, and if like me you didn’t read that answer’s long clue beyond “simple salad, and…” you may have first arrived at LEAF green in VOI(LEFA)BRICS, which is not the thematic part, VOILE is, as it anagrams to OLIVE (green). Similarly SAGE (green) is found at the beginning of SEGAGENESIS; MARYTODD hides ARMY (green). FERN (green) is concealed in NERFBALL and MILEHIGHCITY contains an initial LIME (green). There are a ton of “___ green” greens, but these make a serviceable set. VOILEFABRICS was the weakest entry, both for its gratuitous plurality and its tautology.

Six answers and sixty-two squares is quite busy, as themes go. The middle-top and bottom areas show the most strain. AAS/CCI and IRENA/ASSAM crossing XES/ICEDAM being the most glaring parts. It’s a shame to see a thematic X’s cross being so dull. One less entry would have made the rest of the puzzle breathe (or a 17x grid, which is unfeasible as printed puzzles have space constraints.) 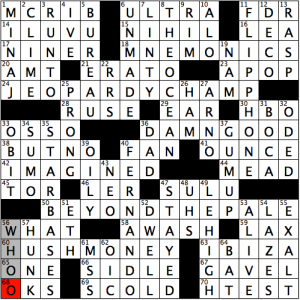 Once again, I tackled the BEQ Thursday puzzle with just the down clues. I’m pretty sure the revealer is 60a, HUSH MONEY, and the theme is that the silent letters from five across answers (MNEMONICS, JEOPARDY CHAMP, DAMN GOOD, IMAGINED, and BEYOND THE PALE) spell MONEY (in a “hush”ed way).

After looking at the across clues, that suspicion is confirmed. The JEOPARDY CHAMP clue makes reference to current 25-day champion James Holzhauer, who is averaging an incredible $77,000+ per game.

Six theme answers is a lot! STAR BASES and FLIP PHONE are nice additions to the grid.