Caitlin Reid is a classically trained pianist currently home full-time with four children (according to the constructor info that came with the puzzle) and both of those vocations show up in this delightful puzzle. 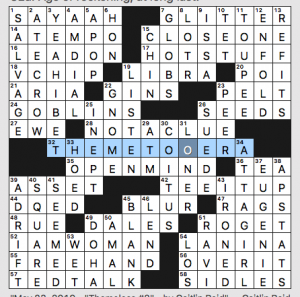 What I didn’t know before I did this puzzle: that David Bowie played the King of the GOBLINS in “Labyrinth.”

I leave you with this. Of course. 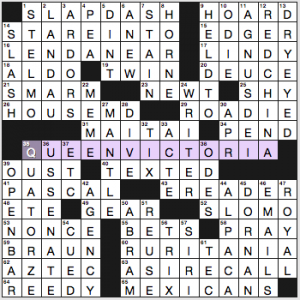 Stan edits (and sometimes writes) the Newsday “Saturday Stumper,” but that wouldn’t let him run a themeless centering QUEEN VICTORIA‘s bicentennial on her birthday, since his Fridays are booked with themed puzzles. Happy 200th, QV! 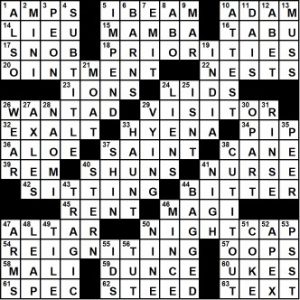 Hmm. I believe I have seen a similar theme here or elsewhere recently. The reveal:

The editorial question is why are we inserting IT in these various words? I’ll let y’all discuss this. 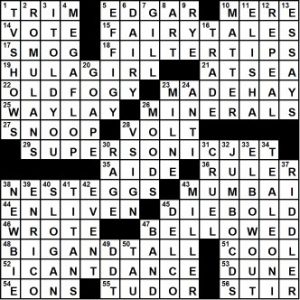 By my count, no fewer than 18 elegant ILSA’s inhabit this remarkable themeless crossword, which felt like a Monday Times difficulty, yielding to my plodding approach in just under nine minutes. Those, plus clues that kept me smiling throughout, made for a good start to a three-day weekend. Take a look (and I’ve decided not to type in the clues–I cannot copy-paste from this venue, and it takes too long with too much margin for error): 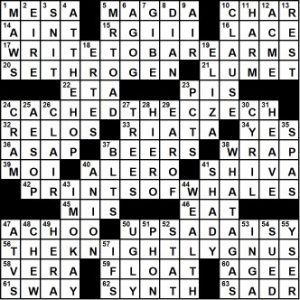 I like this crossword, but I have to start out with a nit. It’s a funny, punny puzzle, which depends for its primary effect on homophonics. And yet, it does the one consistently controversial thing that is so often done in this category of wordplay: It treats aitches (H’s) that are supposed to be pronounced as though they were silent. Whirred is not a homophone of word; nor is whales a homophone of Wales. For the balance of this review, I will adopt the “Close enough” principle and share with you the fun I had solving. 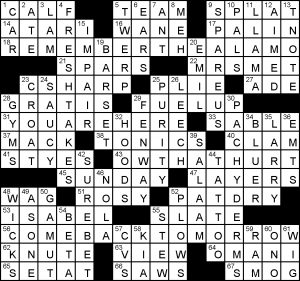 In a way, this puzzle theme is like those clue/answer reversal puzzles, but is far more interesting in a number of ways. All of the clues have the format “___ statement” but are all creative “?” style clues. The four answers all have punch too, particularly the opening and closing sixteens (!): [Mission statement?], REMEMBERTHEALAMO; and [Closing statement?], COMEBACKTOMORROW. The former I first encountered in the video game Scorched Earth, and only learnt of the context much later. The other pair is [Position statement?], YOUAREHERE and [Impact statement?], OWTHATHURTS.